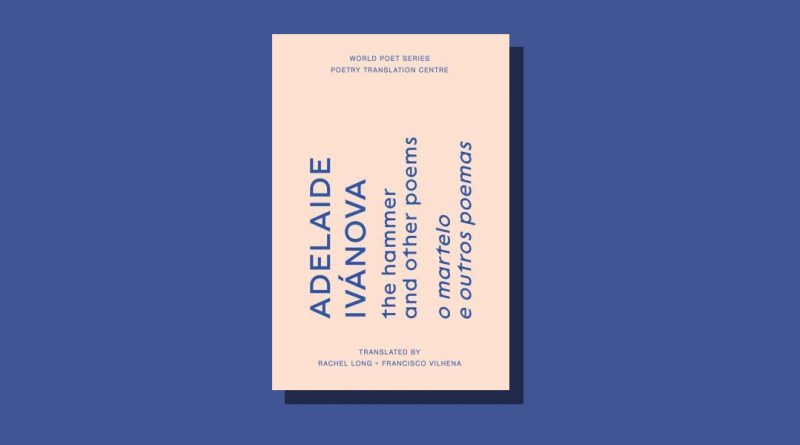 In Vilhena’s introduction to this chapbook, Adelaide Ivánova’s poetry is put in context for English-speaking readers. She was born in Brazil in 1982 and currently lives between Berlin and Cologne. o martelo (hammer), for which she won the 2018 Rio de Janeiro Literature Prize for poetry, is her second collection (after 13 Nudes).

This slim chapbook is a selection of poems from o martelo, which deals with the deeply emotive subject of rape. The mythic archetypes of Lucretia (driven to suicide), Philomela (whose tongue was cut out so she couldn’t speak out) and Lavinia (also mutilated), are all alluded to. A considerable number of outspoken artists and poets are referenced too: Sylvia Plath, Emily Dickinson, Anne Sexton, Hilda Hilst, Ingeborg Bachmann, Matilde Campilho and Anna Swirzcynska, among others.

Almost all the titles begin with the article: ‘the hammer’, ‘the sentence’, ‘the testicles’, ‘the mule’, etc. The visual impression on the page is of a casualness, suggested by line endings that disrupt meaning; as a rule, they don’t seem to offer further nuance in English, though perhaps they do in Portuguese. The stylistic lack of capitalisation and punctuation may be a subconscious or subversive resistance to the ‘authority’ of grammar.

I always enjoy learning new facts, and the opening lines of the title poem arrested my attention: ‘whenever the pope dies / he gets / a little blow with a hammer / on his forehead…’ Further musings on the hammer follow, all of them intriguing. The cryptic statement, ‘hammer / is a heroic decasyllable / with tonics on the positions / three six and ten’ suggests its connection to music (and a piano has ‘hammers’ too).  Ten instances of hammer use are mentioned in the poem. Adelaide frequently uses language to reveal how a word can have multiple meanings; and here, as well as its practical and symbolic uses, the hammer is shown to represent both a tool of oppression and a weapon of defence.

As most poets understand, selection of the most apt word is paramount. One of Ivánova’s key devices is to consider word associations, spinning out into other languages. In ‘the testicles’:

What is noticeable about the overall structure of the poems is their use of symmetry and refrain: ‘make me cry. you make me cry.’ There are also recurring creature motifs, sometimes categorised collectively (beasts, insects, beetles, fishes, ‘all the animals’) and other times, more specifically: hammerhead shark, hyenas, mole, moths, mule, donkey, nightingale (male), dog, spiders, lice, ants, (Piscean) mites, bedbugs, hyenas, serpents, (a toy) elephant. In two poems, ‘the married woman’ and ‘the good animal’, she refers to herself as a ‘good, domesticated animal.’ These animal references are a useful transference device to help manage difficult material, as in ‘the visit’:

there are untrustworthy beasts
less so than moths there are hyenas
beetles fishes serpents
if there are 2 in the mattress
of 1 visitor there will always be one who is not
innocent.

Patriarchal authority figures recur – a king, prince, pope, judge – all embodying an institutionalised misogyny. As a woman, I found myself responding to Ivánova’s material with an acute sense of the sexual and social complexities of womanhood. ‘the married woman’:

i swallow
the wine
i deposit
olive
pits on
the corner
i control
the fertile period
i pretend
to be registered
vaccinated
beautiful
domesticated animal
i celebrate
banalities….
sex
bikini
razors
travel
the olives
the napkins

In a poem titled ‘for laura’, it is unclear why two murders are referenced, while the poem is dedicated to only one of the victims: an eighteen year old who was murdered ‘by the state and by our indifference’. There is reference to a video that was posted on Youtube of Laura, ‘disorientated and who wouldn’t be, blood spewing from the mouth and back of the dress’. When I googled the video, I found that Laura was a trans teenager. A further news report online suggests that her body was left on a rubbish heap in the street. This adds resonance to an earlier poem ‘the half-confession’, where Ivánova writes bitterly:

In ‘the dog’, a woman is in a support centre, wondering if she’ll ever be able to enjoy sex again, after being raped. At the end of the poem: ‘i don’t put out the way i know / i like, and Humboldt fucks / like husbands do.’ At least Humboldt (the only capitalised word in the chapbook) seems benign: ‘only the/ moths and Humboldt / did not bite me’ (‘the visit’). The story of the actual rape is left unrevealed, but there are hints in ‘the visit’, which Critchley, in her afterword, informs us means both ‘the visit’ and ‘the visitor’ in Portuguese. Perhaps there are multiple ‘visitors’, rather than ‘visits’. Perhaps they are invited; perhaps not. When read in conjunction with ‘the married woman’ it is possible to perceive the speaker as an escort. In both the introduction and in the afterword, it is suggested that the speaker casts herself both as rape victim and ‘adultress’. I found myself wondering if Humboldt, who may be her husband, is also her pimp.

Obfuscation can be distancing, as can the analysing of words, their etymology, alternative meanings, and in what Critchley calls Ivánova’s ‘vertiginous lists’.  But in these poems, a core anger constantly hums beneath them. We are reminded that testimony is a statement of both resistance and empowerment. In ‘the envelope’:

this licked piece of paper
is language
and revolution.

Ivánova connects with others who have experienced devastating loss, such as the woman with Alzheimer’s, whose toddler drowned because her husband forgot to cover the pool when he was playing tennis with his friends ‘maybe as rich or more so / than themselves’. It is particularly poignant that the mother never lets go of her child’s toy elephant: while she may have forgotten, it is an accepted belief that the elephant never forgets.

Of particular interest is the fact that each translation is set alongside the original poem. The process of translating is a subtle, complex, challenging one, involving personal word choices that affect rhythm, meaning and resonance. The opening stanza of the poem ‘the sentence’ is translated thus:

the atrocious decree weighs, the certain ending.
the equitable sentence of the iniquitous judge weighs.
weighs like an anvil on my back:
a man was absolved today.

The translators have chosen Latinate words to describe a visceral response to an injustice.  Although I don’t speak Portuguese, I noticed that the English lines were longer than the original, and they didn’t seem to follow the rhythmic pattern. So I consulted Google Translate and came up with this:

a man was acquitted today.

Translation depends on a translator’s knowledge of the language, artistic sensibility and ability to grasp the concept of the original work. Word choice and the placement of words, occupy a translator’s attention. Moments of grace are both the aim and the pleasure. I find the selection of the word ‘iniquitous’ one such pleasure, although I regretted the omission of the powerful repetition at the beginning of each line: ‘it weighs’.

At times, perhaps the translators deliberately opt for shock effect.  For example, in ‘the sentence’ (‘two re-readings of two odes by ricardo reis’) the defendant is shrugging with feigned innocence, while ignorantly implicating himself:

she claims she complained and oh the drama! But back then
she didn’t even move. It’s her fault: she stuffed her
drunken face.

Ivánova is a trained journalist who deploys reportage, testimony and commentary to powerful, bristling effect. The fragmentation, lack of linear narrative, the repeated and layered motifs, signal to what remains unknown or cannot easily be brought to consciousness. Perhaps, when dealing with situations of injustice, violence and trauma, this is the only way to maintain physical and psychological boundaries. The effect is quite a hammer blow.