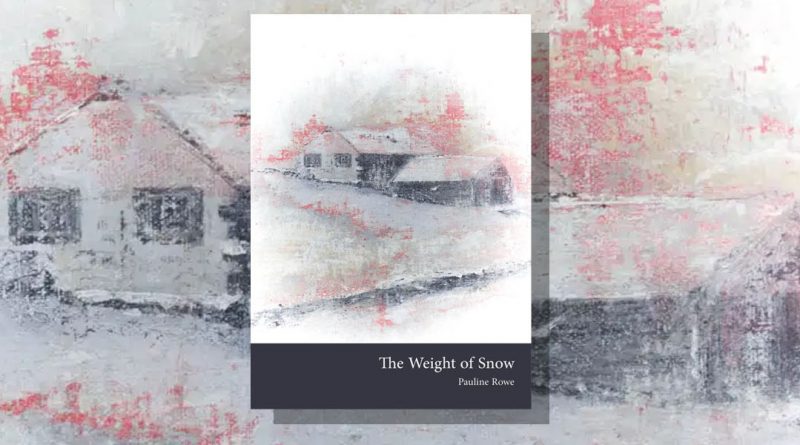 The Weight of Snow reads as both a sequence of poems In Memoriam of people important to the writer, important in the way the ever-present, missed and influential dead can be, and as a drama. The book reveals effect and affect of loss and the way we search for understanding. The voices and parade of more than a dozen characters are powerful. I imagine the work as a play, each poem a small scene or voice-over. Pauline raises the curtain to allow the reader into an intimate drama which opens with a vivid scene introducing the protagonist

…my nanna danced in her new kitchen
after years waiting for a corporation house —
the ounce of joy a rare legacy.//
She held out her fleshy arms.

But there is warning from the start,

as though he had a premonition –
the first invisible mutation of cells,
and the final snow fall.

We follow loss, death and inquest, and a myriad of characters who people the area of Widnes where the poems are set. Family and characters such as Mrs. Fox who takes centre stage in two poems: aurally, in ‘House move, 1971’,

Mrs. Fox’s DTs in this, such a lovely area.
Her calls in the night were the road’s confession//
… A punctuation of laments

and in ‘Mrs. Fox’, ‘Her giddy vowels /rising into sobs// I place all my trust in thee’. Confronted with the image of this woman, an amalgam of many broken women with her ‘…fallen perm/ around Stanley Baxter’s face’, we’re told her house was in need of repair, like her, ‘our smart road’s Sarah Gamp’. As a reader, I was torn between a sense of annoyance at the neighbours’ attitude towards Mrs. Fox and sympathy for the disruption she created. This empathy elicited by Pauline’s writing is a strong feature of her work.

The poems about Mrs. Fox contrast powerfully with the ‘I’ drawn and depicted in ‘Escape Artist’ with the strong image of adolescence/ coming of age ‘Packed in tight/ on the back of my soul,/ all bound in strings, silks, skin/ I was hurled into the sky of life.’

We meet, and it’s hard to forget, Adrian who, with his alter ego Baz in ‘Tremors’, is addressed,

You could draw like no-one else I knew,
sketched my portrait in quick time.//
To the teacher who called you girl
for your long hair – you wore a skirt to school.

and the harrowing, ‘you took the largest kitchen knife. Hours of micro-surgery left a tremor.’ There are scene changes, moments of quiet and calm in poems such as ‘Widnes Library’, ‘I found freedom/ in an apple barrel on a ship.’

The drama reaches a crescendo in ‘Delivery Room’ the penultimate poem, with its precise form. The reader is party to the liminal experiences of birth, death, and to the return of the dead Nanna just as the poet-narrator’s new baby is brought into the world – a visitation and annunciation in the form of a vision, bringing something of understanding and that miracle – a new born ‘a holy object’.