The Flaneur is a zine that styles itself in the aesthetic of a quirky dandy newspaper ‘for the cultivated stroller of city streets’. It is available as a newspaper, iPhone app, or, the option I picked, a £1 downloadable PDF. The Flaneur mixes articles, poetry, fiction, and art in an attractive manner but sadly, it is the content that lets it down.

Article-wise, the zine kicks off with Sagy Zwim comparing rather unoriginally, and about a decade or so out of date, the Big Brother experience to Jean-Paul Sartre’s No Exit. This isn’t necessarily a bad comparison to attempt, but if you’re going to approach well-trodden ground it might be wise to get an angle or avoid surface generalizations.

Comparisons seem to be the order of the day since Jonathan Powell views Le Mans as ‘one of the few art performances that last 24 hours and takes place at 200 mph’. Full points on originality though the article loses its punch once it is disclosed that Powell really means that one car in particular at this year’s Le Mans, designed by Jeff Koons, is a work of art. Anyone expecting an interesting argument in favour of car racing as art will be sadly let down.

Then there is Johanna Lambert’s ‘A Crummy Cinematic Experience’, an article that favours an annoyingly colloquial style of writing to the detriment of clarity and punctuation. Take this for example:

‘It was my experience. Mine, mine, mine. As it’s a festival showing, you expect an introduction, ‘amazing film…director is supa dupa…wears hats… enjoy’, yadda, yadda, yadda. And as with the film I saw the night before someone equipped with a mic stood at the front of the cinema.’

First we must thank Lambert profusely for clarifying the meaning of the word ‘Introduction’. Then there is that sentence: ‘And as with the film I saw the night before someone equipped with a mic stood at the front of the cinema.’ Punctuation would have been appreciated, as would a reason for mentioning (yet not naming) a film in passing. What was Lambert trying to achieve here? Should she be applauded for having seen a film at all? Is it particularly remarkable to find a film featuring a man with a microphone standing at the front of a cinema? Is the film too embarrassing to be fully mentioned (was it Twilight? It was, wasn’t it?)

The poetry doesn’t fare much better, it is of the type one writes as an emotional fifteen year old who has not read much besides the lyrics of My Chemical Romance.

As examples, there is J.A BeAngelis’ emo ‘Embrace You’ where the narrator asks to ‘Burn myself into your soul’; or Sime Knezevic’s immature ‘The Black Swan’:

Beneath the ripple she did spur’

It is in the artwork that you find the best poem, in the guise of Clare MacCracken’s unnamed piece. The holding-up-a-note might be a well-worn trope but the writing is funny and suprising enough to make it a forgivable fault.

From these excerpts, my impression is that The Flaneur’s writers must still be of a young age. This would make the facile choice of subjects and easy errors of immaturity understandable. After all, we’ve all made those mistakes and I don’t want my review to suggest that these writers will not improve with some time and effort. It is impossible to know their age or any other information however since the list of contributors has not been updated from the last issue.

The Rolls Royce edition of The Flaneur is the perfect zine if you have teenage acquaintances with the beginning of an interest in writing, art or culture. It will, however, prove unchallenging to a better-read audience. Still, at £1, it’s not going to break the bank. 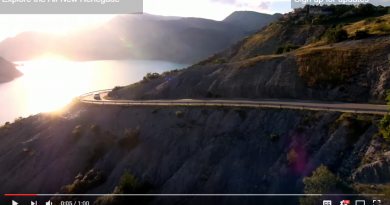 One thought on “The Flaneur – Rolls Royce issue”