The LBJ is a biannual publication dedicated to  creative writing about birds. Its title comes from the acronym for “little brown job,” used by birders to describe difficult-to-identify species, such as many warblers or sparrows.

I haven’t been able to get my hands on a paper copy of the LBJ, but their website offers a small selection of pieces from the publication, which I’ve used as a basis for this review.

I’ll start with ‘He Knows Me as the Blind Man Knows the Cuckoo’ a short story by Elena Passarello in the current issue of The LBJ. This is a wonderful piece of fiction, which I have shared with students in the class I teach on environmental writing. It opens:

‘It’s the first day of spring. A male Cuckoo in his prime bursts into the open fen, hollering as he sails over its weeds, scrubs, and dikes. He lands in a shady spot, firing the sound of his father and his father before him—all those males he’s never met.

I want a girl just like the girl that married dear old dad, he sings, imagining a marriage that probably took place in this same fen one spring before, with an earlier variation of his own, famous descending third: cu-koo.’

From there on it continues, an exuberant story of cuckoos, with references to popular culture and human behaviour, which presents the birds’ breeding behaviour in a way that the reader can relate to, while being accurate bird biology too. It’s brilliant and was a worthy winner of the LBJ’s Urb Bird Contest.

Moving on to poetry, we have ‘ For the Birds (1900 – 2009)’ by Camille T. Dungy, a heartbreaking list poem of bird species that are known or believed to be extinct, some of the names are poetry in themselves – Nuko Hiuo monarch, short-toed nuthatch vaga, red-moustached fruit-dove. The fact that most of them are species the average reader won’t have heard of only makes it all the more poignant.

Linnea Ogdens ‘I and the Starling’ is a sestina (a poetic form that relies on repeated words rather than rhyme) illustrated with words arranged to look like flocking starlings. It’s a beautiful, swirling piece of poetry, full of wonderful observations. I read it over and over, and it inspired me to experiment with writing sestinas, which previously I have found dull and tiresome to write.

I have to admit, I’m not sure how much appeal The LBJ would have to anyone not already a keen birdwatcher. The work seems to assume a certain level of familiarity with bird biology and a good variety of bird species (and it seems to be biased toward North America too, so even the keen British birder may be at a disadvantage). My other criticism is that some of the pieces seem to be overwritten. If you like your prose ornate and flowery then fine, but it doesn’t always work for me. It did in ‘He Knows Me as the Blind Man Knows the Cuckoo’ (see earlier) but in other pieces I found it irritating. An example is the editor’s introduction, which in the current issue is a moving and interesting story about a family of peregrines, that I couldn’t help thinking might have benefited from tighter language and fewer adjectives.

However, judging from the selection on the website, The LBJ is an excellent publication for anyone interested in birds and literature. 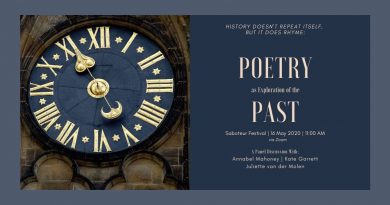