Noon invites us to experience life seen as ‘A matinee at the Theatre of Water’ in these two pamphlets, plunging hidden depths and murky shallows. His chosen forms both follow rules and break rank. A pleasing, readable rhythm pulses through these slim volumes, ebbs and flows like the tide.

In Across The Water we glimpse fragments that have captured Noon’s attention. His poems blend fleeting flitting thoughts with snapshot word sketches to give us a sense of those moments. The 20-part title sequence is a good example of this brevity of style and expression, using little to say much. His sharp pen portraits capture the city and her people with mica glimmers of tongue in cheek humour. Sun shines, saplings grow and bubbles blow as failings are confessed, skies sag, rubbish is bagged and the dark is disturbed:

windowless
in the rain, as if

Noon’s poems chart the liminal and the littoral, dot-to-dot points along horizon, coastline and tideline, as ‘Revocable gusts / design the dunes: we write / our footnotes on their sides’. Across the Water was originally published as joint winner of the Mimesis Digital Chapbook Initiative in 2008 and an earlier version of Swamp Area appeared online through Intercapillary Editions in 2009, however both pamphlets have been revised and expanded for 2012 publication with Longbarrow Press.

From saltwater surf and sailors we move to the marshy, watery terrain of Noon’s second and more promising pamphlet collection Swamp Area, an astute examination of the sinking motions of modern life whether at a Media Studies conference or by ‘the vanished cliffs of the Berlin Wall.’ In ‘Filling the Triangle’ suits stagnate in the daily commute, a people freight chain who live by the tracks:

‘Three lines disperse us
on zigzag seats;
our overalls and suits
make a daily diaspora.

The terminally bored
have grooved the glass.’

The turning of pages moves us from the bare skin, Cold War air and graffitied thoughts of track and station to the squatters’ breath of the street. Sequences depict the vascular networks that guide vehicles and vendors across the urban terrain. A land scattered with expired permits and echoes through history. 10 in this series describes two tenements: ‘On one, disrepair has skimmed first letters / off ream, utter and ilk.’ The other offers a peachy, glowing future. It’s sign is: ‘the floating seaweed that predicts the shore: / Events, Consultancy, Design.’ Life moves with the times, against the tide.

In Swamp Area the land that shifts and crumbles, shape-shifting and pooling around the jetsam and flotsam scars of half-remembered times where ‘New towers berlinned on the banks,/ and new banks berlinned in the towers.’ and:

‘We hurtle across the surface
on the lines of its changing face,
through the napped-out terrain.
We are the talking trains.’

Where Across The Water allows us to tuck ourselves into the gaps between Noon’s thoughts, providing us with people watching fodder from afar – across shore, or horizon – Swamp Area allows us to draw closer, to dig deeper and to snoop through holes in the fence, or a twitch of the net curtain. Like city life it strips its subjects of personal space, and gives us a head-full of eavesdroppings to mull over. 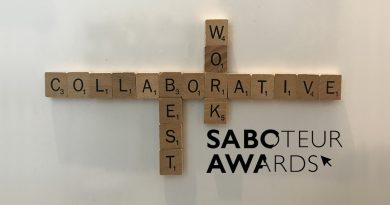