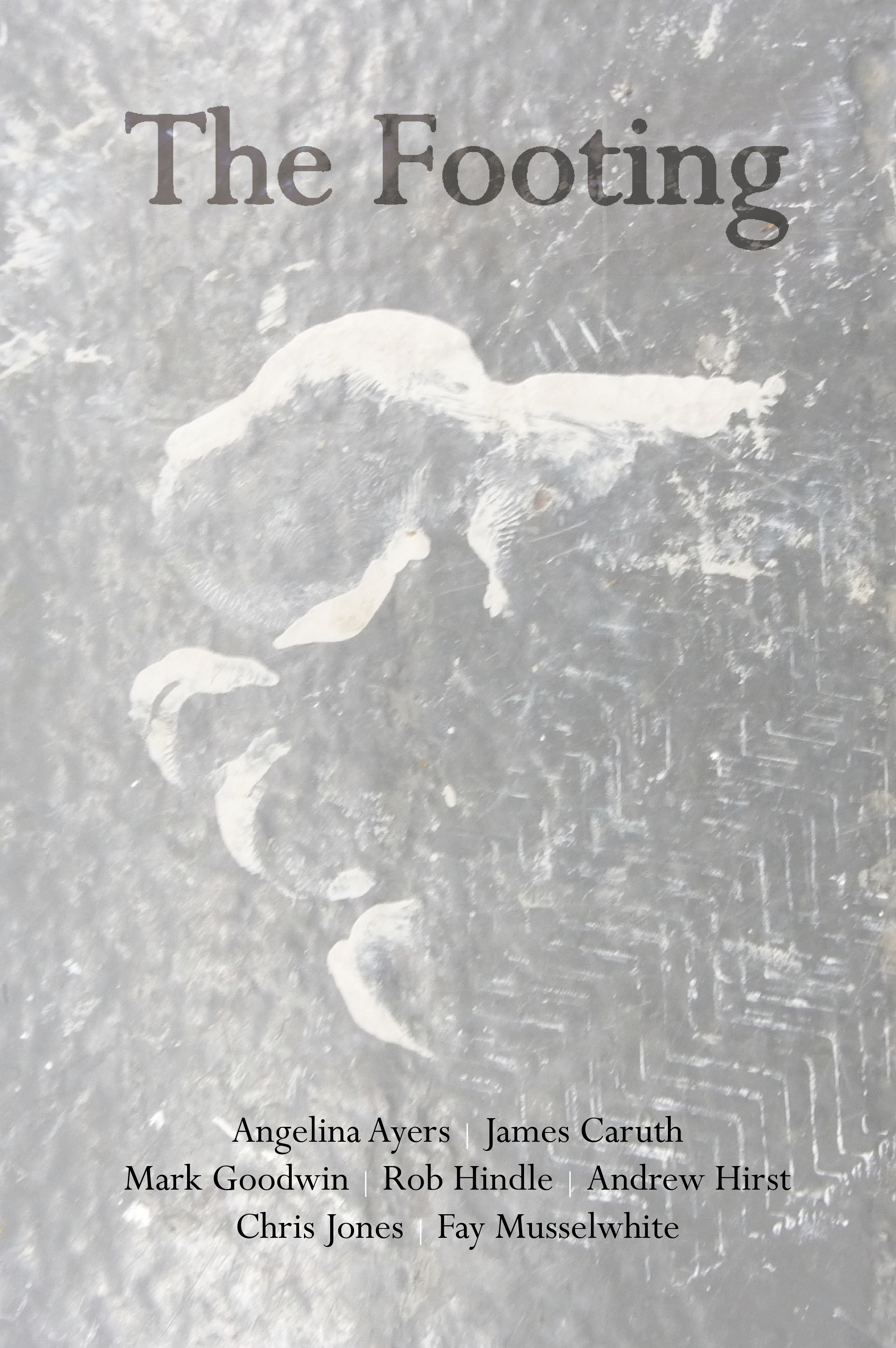 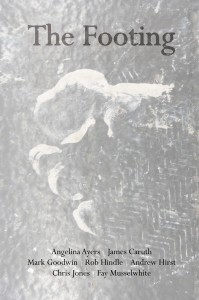 To walk is to establish a rhythm, a human rhythm, the systole and diastole of feet on the earth. To walk with attention is to be in the world of immediate physical perception, to experience the world at your own pace. It’s not hard to see why walking has long been a favourite trope for poets, one that had currency long before the recent popularity of Psychogeography and that seems certain to outlast it.

In The Footing, Brian Lewis has brought together poems by seven poets whose engagement with the relationship between writing and walking is central to their work. The poetry in the anthology is not unified by any other artistic factor; there is no particular shared aesthetic and the seven writers do not appear to constitute a movement of any sort. The one other connection is that six of them live in Sheffield and their walking centres around that city.

The first section of the anthology is Tithes, a sequence of ten poems by James Caruth that concern themselves with the marginal and with war and how these two themes can overlap. The first poem is set in Stannington, a parish on the edge of the city of Sheffield and ends in the city itself. Images of the liminal abound; these include both physical boundaries like ‘stone walls’ and ‘borders’ and more intangible edgelands such as a war memorial and a Quaker graveyard.

The opening line of ‘Stannington’ sets the tone for the second major theme:

Two poems later, ‘he’ visits a war memorial carrying a tithe of familiar names before going home to watch the arrival of the latest coffin from Helmand on the TV news. There is even an echo of the WWI poets in ‘Close of Play’, when the narrator imagines

…lithe ghosts
throw down their caps to chase hope
all the way to a white picket fence.

The restlessness of the earlier poems in the sequence begins to find some sort of resolution in the final two. In ‘A Stone’ the speaker marks the possibility of carving out ‘our own small space’ in the marginal hills around the city, while in Nocturne the city itself becomes an enactment of civic order as in the night ‘A town hall clock chimes the hour.’

Caruth’s rhythm is patient and meditative, and his poems move with a quiet grace.

Chris Jones’ Death and the Gallant is a narrative sequence consisting of ten sonnets which tells the story of a pair of mercenary iconoclasts in Reformation England, Brown, apparently the head man, and an unnamed narrator. The make for an unlikely pair of religious reformers. Brown is a womaniser and is quick to take any physical comfort he can find, for instance abandoning walking for horseback at the first opportunity. The narrator’s sins are less evident, but more dangerous; he is both cataloguing and attempting to protect many of the works of religious art he is tasked with destroying.

The walking in these poems is hard work, the narrator picks his verbs carefully: ‘wade’, ‘trudge’, ‘trail’ and ‘haul’ are all used to describe his progress. However, the handling of the verse is deft and thoughtful, and the sonnet form reflects the episodic nature of the story well.

In the penultimate poem of the sequence the narrator achieves a kind of vision of an older order, the world the Reformation threatens with extinction:

The woods are free with spirits, faeries, elves:
they moth my thoughts now dawn makes light of me.
I bless my boots to find such company
plagued as such sprites are to bide amongst themselves
in dank and dappled corners of the realm.

It’s enough to convince the old man to take matters into his own hands and put an end to Brown’s depredations once and for all.

Angelina Ayers contributes a set of four poems under the title The Straits. These poems circle round the river Don as it passes through the city. In an essay, Ayers discussed the autumnal tone of these poems and her concern with matching linear and cyclical time as reflected in human life on the one hand and seasonal recurrence on the other.

This is a poetry of specifics clearly observed, as when the poet is walking down to the river at night:

In the second poem in the sequence, ‘Ball Street Bridge’, she watches mallard standing in the water flowing over a wear and thinks ‘I want to learn//this knack of standing still.’ In ‘Stone Walls and Snowgates’, the last poem of the set, she sees her wish exemplified in the figure of an angler standing in the river waiting for a bite. This is walking in search of a dynamic stillness.

Mark Goodwin’s From a St Juliot to Beyond a Beeny is a work extracted from a longer sequence that maps a walk in the north of Cornwall. The mapping is almost literal, given that Goodwin provides OS map references for each of the nine sections of the poem, each one marking a kilometre of the walk itself. St Juliot is the parish where Thomas Hardy met Emma Lavinia Gifford, his future wife, in 1870. After Emma’s death, Hardy wrote a number of poems that celebrate the same landscape that Goodwin walks through here.

It’s a measured rhythm for a walk on rough terrain and for what is essentially a slow-burning love poem. By ‘Kilometre Seven’, the poet and his walking companion have kissed and form ‘an I & we & you’.

The four poems that constitute Fay Musselwhite’s Breach sequence follow the course of another Sheffield river, the Rivelin. These are poems of blockage and flow, and the walker is as likely to be in as beside the water. Musselwhite is immersed, bringing home great lumps of granite or working to clear debris from the swollen stream, ‘freeing the bottleneck’. At times, the river and the congestion is in her, working towards clearance, towards utterance, and the language enacts this effort.

Snagged in rock at a weir’s head, a dog-leg
of thorn-rusted twig, hoar coated

in the current’s breath.

The opening line of Andrew Hirst’s Three Night Walks sets the basis for what follows: ‘They say I’m a poet of the city’. In walks I and II, Hirst wanders the city at night both physically and in memory, memories of teen walks, encounters with would-be muggers, lost love and early stirrings into poetry. The third walk takes him out of the urban and into the rural, where his awareness of his not belonging is both foregrounded and accepted as necessary:

I don’t know where I am nor where
any of this is leading, but feeling my way over
the density or lightness of things I do not have
to think of memory very much
of foxhole, shattered meadow, oak’s bare branches.

He returns to the city, late at night to ‘begin to draw the future from memory’; a future of more loss as the poem closes with an image of faded friendship. These are slow, steady poems in which walking takes on a meditative quality.

The anthology closes with Rob Hindle’s Flights and Traverses, a set of five one-way walks that trace past itineraries: an ancestor of the poet’s personal participation in the 18th century flight from the land; the funeral procession of Samuel Holberry, chartist; the flight of members of a 1920s’ gang after a murder; the short trip from his granduncle’s family home to the hospital where he died and the line of flight of the first German air attack on Sheffield in December 1940. Hindle has provided useful notes on the cartographic aspects of these poems, so I will not comment on that here. Instead I want to briefly discuss the way in which the sequence is constructed around two axes; past/now and personal/public.

All five poems contain present and past journeys along the given traverse. Attercliffe to the General Cemetery, midsummer 1842, for example, is divided into six numbered sections, in each of which a verse part about Holberry’s funeral is followed by a prose paragraph reflecting the walk as it is now.

Equally, the sections concerning members of Hindle’s family focus on the personal in history. Richard Marsden’s 1782 walk enacts a social change that affected English society profoundly and irrevocably and the words given him by the poet could have been spoken by most of his generation:

Where are you going?
Far as I can.
When will you get there?
Evening.
Where have you come from?
Over the moor?
Will you return?
Never.

Hindle’s poems are perhaps the most interesting in The Footing, and given the overall quality of the book, that’s quite an achievement.

The Footing is a handsome hardback clearly printed on decent quality paper. The combination of this high-quality physical production with the range of online resources available on the book’s blog make it a very interesting experiment in the kind of analogue/digital blend that may represent the future of poetry publishing. It is the best anthology of new work that I’ve read in years; anyone with an interest in contemporary British poetry should read it.