The Middle is a short, powerful book about journeys, both actual and metaphorical, through hope and failure, but ultimately towards the suggestion, at least, of some kind of redemption. The characters, a boy – actually in his late teens – a man who feels the breath of middle age on his neck, and an old man facing his last journey, are un-named, but never simple ciphers; they are recognisably and uncomfortably real, and may well be looking out of a mirror at you at various times in your life.

The boy is on the London Tube on the way to Heathrow. We witness his surveillance of the types around him with their cheap clothes, electronic gizmos and air of failure and disappointment. I like the timelessness of his gaze and passing conclusions, that Holden Caulfield-like contempt of the world of phonies, the notion that youth knows best. The boy contemplates his possible futures:

The choice was stark, and the outcomes bleak: drop out and probably end up in the Argos stock room, or keep trudging on for the entitlement to spend eight hours a day in an artificially-lit office.

The writing is superb, with some great metaphors: the Tube as a ‘living Rubik’s cube’, the ‘wandering nihilism of late adolescence’, a ‘pint-sized Terry Waite – a Terry Lightweight’, and this gem:

He’d once heard some motivational speaker on the radio who’d been going on about how opportunity was always knocking. The problem was, the boy thought, so are salesmen and Jehovah’s Witnesses. He couldn’t help but
wish it used the bell.

Despite its resigned tone, its consideration of failure and suicide put off partly because he has to get his farewell note to hit exactly the right spot, the boy’s narrative is a celebration of youth. With all its flaws, youth still doesn’t hold the terrors of ageing.

The empty pointlessness in politics, culture, academia and student life falls under his pitiless gaze, but he never loses sight of where he is going, and you get the impression that he gets taken along with it all somewhat helplessly but, importantly, with the spark of indignation in knowing that he goes unwillingly. He refers to God as ‘our dear creator’, and notes the self-serving nature of ‘a god that would change water into wine to inebriate some broads at a wedding but ignore the cries of those on board United 93, or suffering Mamma Mia the Musical’.

Stuff like this makes it one of the funniest books I’ve read on the modern condition.

Like any sensitive, misunderstood young man, the boy wants to write, and he has a refreshingly honest take on it:

All he wanted was the chance to call himself a writer to girls in the pub (it sounded better than unemployed), and to possibly see his name, or that of his ridiculous nom de plume, in bookshops.

Those who people the boy’s journey distract him from his thoughts, but they prompt new ones too. These people – painted unforgettably in a few lines – serve a catalytic purpose in the narrative. Were they to be without this purpose, then they might just have appeared to be the butt of what might seem cheap jokes – I like them anyway, I should say – but they put the finishing touches to each thought, and start the next.

The boy’s aim of getting to Paris may only be a dream. It may also be better left as one. His journey reminds me of an episode in J K Huysman’s Against Nature, when his hero Des Esseintes starts for London but then, surrounded by English travellers in the waiting room at the Gare du Nord, realises that he has got the essence of it.

In part two,‘the man’ is at the airport. He starts off thinking about his regrets, not writing a novel – like the boy – and not making it with the band he was once in. Time has stolen everything from him, he reflects, ‘like Lehman Bros’, has delivered him away from his dreams into the clutches of wife, children and mortgage.

Unlike the boy, the man seems to have reached the stage at which he will get on a plane. Like the boy, he makes a fantasy out of his New York trip, all the while the reality of it – a dull business meeting – in the corner of his mind.

He ponders one of the many crises of capitalism, and his place in it:

Providence had given him everything, and yet everything was not enough. In fact, nothing was ever enough. Having more things created more opportunities for it all to malfunction… the man couldn’t help but think he had been the compliant architect in the construction of his own suffocating prison.

The man’s story has the most melancholic turn to it. The cheerfulness is missing from the humour, and, more chillingly, hope is also absent. We can believe the boy when he dreams, can accept that he may well turn his life into something. The man has lost that optimism. Like the boy, he has escape in mind, and sees himself ‘disappearing; reinventing himself’, but we can’t take this as a serious proposition at any time.

‘The old man’ is also fixed on travel in part three, though we can assume that this journey is probably going to be his last:

It would be a stretch to say that the old man couldn’t wait for the final throes of his earthly existence, but he wasn’t particularly enamoured with the idea of
hanging around too long. Hospital life was inane and dull – it was just like real life.

Doctors are sinister and vulpine, and the old man’s fellow-patients are sheeplike, content to waste their final hours in watching daytime TV. However, my main impression of this part was that the old man had regained the comic, but also generous, eye of the boy in this sequence, which could be depressing, but isn’t.

The old man is another who regrets the not-done. There is yet another unwritten book here – but at least it got a little further than those of the man and the boy. He also thinks of ‘unimpregnated woman’ and, a comic note of chill, the people he didn’t kill in a spree.

Django Wylie has given us a stunning novella, sometimes heartbreaking, but always funny. ‘Start over’, the last page exhorts us (before we go on to a playlist of music I don’t feel qualified to comment on – though I will be investigating it) and I wanted to, and I will. 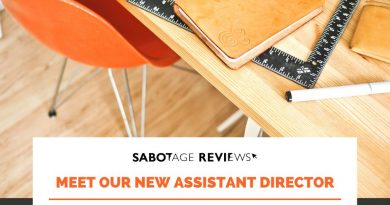 Saboteur Awards Festival 2020 – How it looks from here

May 2, 2020 Heddwen Comments Off on Saboteur Awards Festival 2020 – How it looks from here

2 thoughts on “‘The Middle’ by Django Wylie”