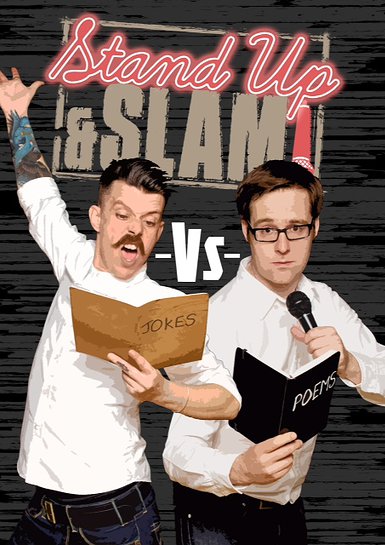 Stand Up and Slam at The Comedy Café, Rivington Street

At this inventive and energetic new monthly night Chatback Comedy Club and Canterbury’s Poet Laureate, Dan Simpson,  have teamed up to create a slam concept with a difference. Pitting the best of London’s Stand Up and Poetry performers against each other they hope to create a compelling hook to get audiences from both scenes involved.

They have also bagged themselves a fab monthly venue in the heart of Shoreditch. The Comedy Café, tucked away on Rivington Street , is cosy and fairly unintimidating.  So far, so good. This event is definitely the sort of thing you can feel very cool inviting people to. Trendy bar. Tick. Plenty of folks in rolled up jeans and chunky knits. Tick. Overpriced beer. Tick.

But what about this Poetry vs Comedy idea? It sounded good enough to give it a go, but to be honest I was dubious as to how hosts Dan Simpson and Paul Sweeney were going to pull it off. My main reservation was how can you compare two art forms that on the surface are so different? Surely the audience will simply see the good in both performances and be unable to choose between them?

As the night got underway however it was clear that however successful or otherwise their slam concept proved to be in the end, Dan and Paul were definitely going to entertain us! Playing to a packed and enthusiastic crowd, Dan was the straight man to Paul’s quirky tongue in cheek character (a loveable prat). The two hosts were slick, well prepared and quickly built a witty rapport with the audience, playing off each other’s exaggerated onstage personas.

The event was split into 3 rounds, each with a nicely timed bar break between them. Round 1 was between Canadian comic John Hastings and rapper/poet Charlie Dupré. John was charismatic with a relaxed storytelling style of comedy, he combined fresh capricious punch lines with effortless charm.  As I had predicted to myself all three poets decided to perform work with a comedic edge.  Charlie’s laid back performance allowed for the dry humour in the pieces he chose to come across naturally and the audience appreciated his clever pairing of comedic stories with pithy rhymes and metric wisecracks.

At the beginning of the evening a member of the front row had been picked out to decide a winner at the end of each round based on the audiences’ reaction. The hosts used this feature to ham up their links, competing with each other to impress her through gifts and well- timed compliments. However when it came to the  actual judging she was asked, in front of the whole crowd, to choose between each act and this felt uncomfortable. By the end of round 1 I already felt like there was little point to the slam element of the evening, with such good performances and a great atmosphere in the room why bother picking a winner based on such a flimsy judging idea?

As the evening progressed the quality of acts continued to be extremely high however. The line-up was carefully balanced and showcased a range of different styles across both art forms. Next up was poet Rob Auton and impressionist Anil Desai. Bang said the Gun poet Rob’s poetry is brilliant and he has a unique onstage persona; he’s naturally hilarious and never does what you’d expect.  If you have never seen him before, he’s quite simply wonderful.  Fresh from winning Best joke of the Fringe, Rob is quietly confident on stage and is a master of the well timed pause; the only downside to his sets is that if you have seen them before you are unlikely to encounter much new material. Rob was a great addition to the line- up because his work genuinely crosses the borders between the two art forms.

Anil  was totally different but equally talented and this was definitely the most inspired pairing of the night. Asking a member of the audience to read out names from a pack of cards he romped through his take on these different personas at an impressive rate. He was great to watch as he had the ability to make himself look like each character as well as speak like them. He combined this talent with witty material which was a little hit and miss but generally a great crowd pleaser.

After another break I noticed the audience had started to dwindle and this was a shame. I felt like this was another bad mark for the slam concept, because if they had not been confined to rounds the event could have been shorter, allowing Dan and Paul to distil the best elements of the night into a tighter format.

As it was, although I enjoyed comic Dan Schreiber’s engagingly geeky set and Keith Jay’s articulate, rhythmic poetry, I was quite glad when it ended a little before 11pm. Again, however, what made it worth staying for was the satisfying pairing of two completely different performers which was thought-provoking as well as entertaining.  Dan’s style was very relaxed and cerebral for a comic and Keith managed to successfully bridge the gap between making a few jokes and retaining the integrity of his own poetic style.

This event worked despite the slam element being, for my money, unnecessary. The pairings were interesting to compare and contrast each act, but to assume the audience needed a competition felt like dumbing it down, when the night was entertaining enough to move between the two genres, soaking up the enjoyment to be found in both.  The slam also meant that the poets had to compete with the comics for laughs and the line-up reflected this. The poets chosen were all very funny as well as good poets, but there are plenty of amazing poets out there who aren’t good at jokes and I’d love to see some of them on this stage!

This event was extremely good fun and succeeded because of the interesting mix of high quality performances which allowed the hosts to showcase  talent and variety across the two art forms.

My opinion? Ditch the slam and continue to book great artists for this fresh, highly entertaining midweek event! And with the next Stand Up and Slam coming up tonight (Thursday 3rd October), why not give it a go?