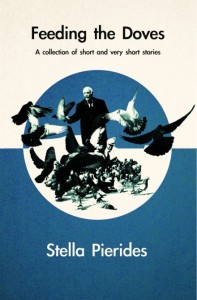 When I had to learn lists of foreign vocabulary at school, it struck me that the English translations in the facing column could be made to tell tales of their own. Mother….child…I hate…peace…sword…happiness: ostensibly unconnected words formed stream-of-consciousness narratives for a reader whose imagination was sparked by these barest details. I felt the same way about the contents page of Feeding the Doves. The 31 stories in this 87-page collection (it’s no surprise to see that it originated in a flash fiction project) by Stella Pierides also seem to invite connections. But although they all depict scenes from contemporary life in Greece and what might be called the Greek Diaspora, their titles do not disclose the deeper themes that bind them together. ‘A Quiet Miracle’…‘Missed Many Boats’…‘Dream Island’…‘A Life-Changing Story’.

This sparseness extends to the stories individually, which do not waste their limited word-count on scene-setting or extraneous characterisation; each one evokes a mood, makes a point, or charts a phase in an individual’s development without telling us anything more than we need to know. Some distinctive landscapes do emerge, and Pierides seems especially at home describing liminal spaces like seashores or the watery hinterland between Greece and Turkey (where those who die while swimming across find a ‘Dream Island…protected by olive, lemon, and fig trees, and warmed by a kind sun’). Although she now divides her time between England and Germany, Pierides was born in Athens and ‘in her heart, she lives somewhere on the Aegean coast’, so it is perhaps not surprising that Hellenic settings dominate. The two (semi-autobiographical?) pieces that take place in middle-class London in fact seem less convincing than the rest, and rather clumsy in style. Otherwise, her protagonists are generally well drawn, especially the nosy woman oblivious to the loneliness and tragedy around her in ‘Nearly Teatime’, and the author eventually defeated by a reductio ad Microsoftum in ‘The Accident’. ‘The Heart Has Its Reasons’ and ‘Of Love and Fish’ are both slightly longer stories that focus, with wry pathos, on the redemptive love of an adopted child.

The collection’s restraint is particularly clear when Pierides concludes a story. There are a few instances of the classic unexpected-punch-in-the-guts short story finale (most notably, ‘Written’) but these are outnumbered by neat, almost sententious endings that offer ample closure, and in some cases perhaps a little too much. Conversely, the haikus with which a few of the stories are interspersed (creating a literary form known as ‘haibun’, as the acknowledgements explain) are suggestive of delicate irresolution. This is used to good effect in the opener ‘The Tree’, where the narrator moves from the comfort-seeking uncertainty of middle age (‘spinning a cocoon / around itself – silkworm’) to open-mindedness and optimism.

But what other ideas unify Feeding the Doves as a collection? In the introduction Pierides explains that her work explores ‘recurrent elements of the Greek psyche’ and depicts a succession of people ‘caught in and struggling to free themselves from the challenges posed by their current predicament’. The ancient past is indeed in evidence, in ‘The Weeping of the Trees’, an eco-fable in which the narrator reaches out to the souls of trees on Olympus just as Homer’s Odysseus seeks to embrace his dead mother in the Underworld, and so are the troubled post-war years, but there are also – of course – reminders of Greece’s contemporary condition. Economic migration, Syntagma Square, soup kitchens and middle-class poverty all feature.

Still, this is not a lament of national self-pity, not only as Pierides prefers to present her characters’ vicissitudes as personal, often self-absorbed stories, rather than as a microcosm of the political, but also because this disaster is framed by another catastrophe, the expulsion of the Greek population of Smyrna (now Izmir) in Asia Minor in the 1920s. Pierides’ grandparents, who subsequently settled in Athens, were among the exiles. In the two longer stories mentioned above, placed at the beginning and end of the collection, characters recall how that sad event shaped their own histories, but the tone is one of hopefulness, of looking to the future and making the best of situations that will always be imperfect. Will the current crisis also pass, to live on only in family memories? Pierides does not presume to say, but this collection, which explores the many dichotomies that contribute to contemporary Greek identity – past and present, land and sea, rich and poor, urban and rural, and more – is suffused with a faint note of optimism.