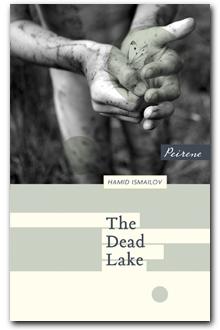 A generation or more grew up in the Cold War shadow of the Bomb, fearing the effects of the nuclear technology that was the focus of an arms race between the world’s two superpowers. But it’s unlikely that any of them were affected in quite the same way as Yerzhan, the Kazakh violin prodigy in Hamid Ismailov’s novella The Dead Lake (translated by Andrew Bromfield). 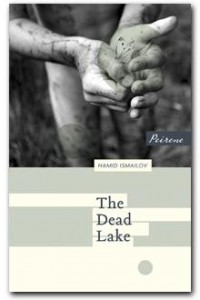 The title might sound at odds with the fact that this is part of Peirene Press’ Coming of Age series, but actually the lake in question is very much an important part of Yerzhan’s childhood and the event that defines his future life. Growing up in Soviet-era Kazakhstan, Yerzhan’s life changes forever when he takes a forbidden dip in the dead lake, and he becomes the Boy Who Never Grows Up.

There is, in that sense, a fairy tale feel to the story – though we’re halfway through the book before Yerzhan has his illicit swim, and Ismailov complicates things further by starting his story with an adult Yerzhan (still physically a young boy) on a train. In fact, from the off, there’s a sense that all is not as it should be, because we meet, early on, a young boy playing the violin like a seasoned pro. That disconnect between Yerzhan’s physical appearance and his emotional and intellectual development is something I’ve never quite found in the likes of Peter Pan.

This is an interesting story for Peirene to chose for their Coming of Age series: Yerzhan’s physical growth is halted, but his intellectual and emotional growth continue. If anything, they are accelerated, and he almost skips the adolescent phase to jump straight into jaded, cynical adult. It’s fascinating as an exercise in isolating areas of a character’s development and examining how those areas might interact.

Speaking of Peter Pan, Western literature’s own Boy Who Never Grows Up, it’s worth considering why these boys don’t grow up, and the reasons are very different. Peter Pan stays young because he wants to (and he’s in Neverland, with fairy dust etc.), but Yerzhan very much wants to grow up. Even before the dead lake, he’s sick of being a child and wants to be a man. Unlike Pan, he resents his youthful state and, far from seeking friends in other young/lost boys, hides away from his peer group. For Yerzhan, an important part of his identity – he’s the biggest boy in the class at one time – is lost along with his ability to age, and it’s remarkable to remember how much importance young children place on their relative positions within peer groups, and how that is all determined by age and who looks older. Yerzhan becomes an anomaly at school, excluded from his own age group and not old enough to join the adults. When first meeting him on the train, before the story of his childhood is told, the adult narrator mistakes (essentially adult) Yerzhan for a child, which must be a common and – from Yerzhan’s reaction – frustrating experience.

The disconnect that Ismailov sets up with his central character is present too in the setting of Yerzhan’s story. Like many good fairy tales, there is an underlying sense of menace throughout, and the feeling that the bleak, lifeless landscape may not be so harmless as it appears. Yerzhan grows up in a two-house village, where the only job is to switch the points on the train track every now and then: not far from a secret government facility where his uncle works on developing new atomic weapons for the Soviet Union. The Kazakh steppe and the test facility are almost active in their dismissal of life, as though nature and human behaviour are conspiring to make the area lifeless and uninhabitable. Even the former buildings have been reduced to twisted shards of concrete and metal spars – while the people are increasingly cancer-prone and possibly infertile. But even beyond that is the unspoken in the relationships in Yerzhan’s family, where it’s never quite clear who’s been sleeping with whom and who continues to sleep with whom.

On top of that, Ismailov never lets up with the shadow hanging over everything and everyone growing up in the early Cold War years: the ever-present threat of nuclear war. Yerzhan’s uncle, committed to the USSR’s nuclear program, repeats his catchphrase about not only catching up to the Americans in terms of nuclear weapon production, but overtaking them. Here, for Western audiences, is a glimpse of how the other side thought of the Cold War, and it turns out to be much the same as in the West. This Soviet scientist talks like it’s all a big stockpiling race, and not a process of neutering the landscape and people in preparation for ultimate war.

In the end, I think it’s the shadow of the devastated landscape that stays with the reader longest, but it’s a landscape haunted by the life that Yerzhan could have had, to say nothing of the ghosts of things unsaid and might-have-beens that litter the Kazakh steppe in Ismailov’s novella.