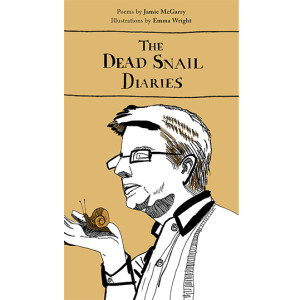 The Dead Snail Diaries, ostensibly co-written by Jamie McGarry and Snail, is a sweet, humorous collection that gently plays with the idea that a poet can only become known after they are dead. The set-up is simple and absurd; a student walking home (his head in the clouds) accidentally crushes a snail to death.  Wracked with guilt, he spends a few days in misery before returning to the scene of the crime where he finds a small, chalk outline and a book of poetry, written in ‘Snailish’. After bringing the book home with him, so the story goes, McGarry dedicates himself to translating the gastropod’s magnum opus.

The poems themselves are largely humorous re-writes of famous poems by dead poets; ‘A Snail’s Advice to His Son’, after Gervase Phinn; ‘Snail Browner than Ever’, after Ted Hughes, or ‘Diary of a Church Snail’, after John Betjeman. These poems are far from profound, but profundity is not necessarily what is wanted here. Poems like ‘The Hollow Snails’, after T.S. Eliot, contain echoes of the original that have been turned on their heads:

This collection does contain a few original poems – considering the subject matter, they are very original. Scientific accuracy is not to be found here, and that is a good thing. The poem ‘Snail Goes Speed Dating’ mentions the calcified ‘love dart’ that hermaphroditic snails use to inseminate each other with, but every hint of naturalistic violence has been excised and replaced with sweet, failed courtships:

Another thing: you can’t rely
On who’s a gal and who’s a guy.
My first ‘speed date’ looked like success
Till I went to compliment her dress
And found she’d somehow changed her sex –
HE barked at me in bass tones: ‘NEXT!’
Oh, molluscs. What did I expect?

Heteronormative implications aside, it was a very sweet poem, and a fine example of the sort of thing found in this book.

Though the book was, largely, a fine example of its kind, there were a few missed beats. The first poem in the book, ‘The Haunting of Poet by Snail’, was a little clumsily executed, containing a few too many clichés:

Must have been. Nearly a week
since I did the deed. It was dark,
and I was hurrying – I didn’t see
his form, the path in front of me.
My careless size-ten shoe came down,
and crushed his hopes and dreams.

Luckily, neither poet nor translator falls back on platitudes often.

It is impossible to write about an Emma Press book without mentioning the wonderful illustrations. Executed by the publisher, Emma Wright, the drawings are reminiscent of the work of Quentin Blake – without his salted edge of cruelty. Each poem comes with its own picture. Some are large and complex, like the full-page snail-themed rendering of Munch’s ‘The Scream’ that follows ‘The Haunting of Poet by Snail’, and some are small and eccentrically sweet, like the empty shell with a ‘For Sale’ sign that comes at the end of ‘A Shell of my Former Self’. My favourite is the illustration that follows ‘Einstein’s Snail’, a depiction of the elderly scientist lost in deep contemplation of the snail sliming his hand. In any case, these drawings add a layer of interest to an already intriguing idea.

I don’t think that anyone would argue that these poems are high literature, but neither are they meant to be. They are wonderful examples of their type, the kind of entertaining pleasure-poem that would make a good gift for someone who is nicely cultured, but who has fallen out of the habit of reading poetry regularly; a coffee-table book or train-journey story for a person with an English degree who has taken a job in a bank, but who still occasionally reads. I plan on giving a copy to my grandmother for Christmas. If you are looking for a holiday gift for someone slightly bookish and a little off-beat, it will be hard to find a better one than this. 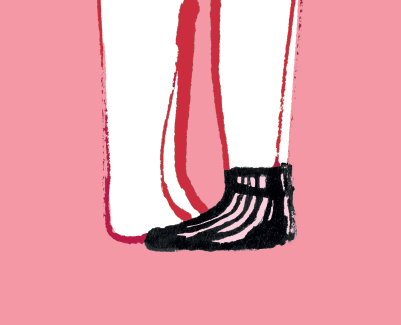 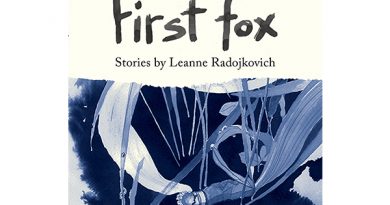