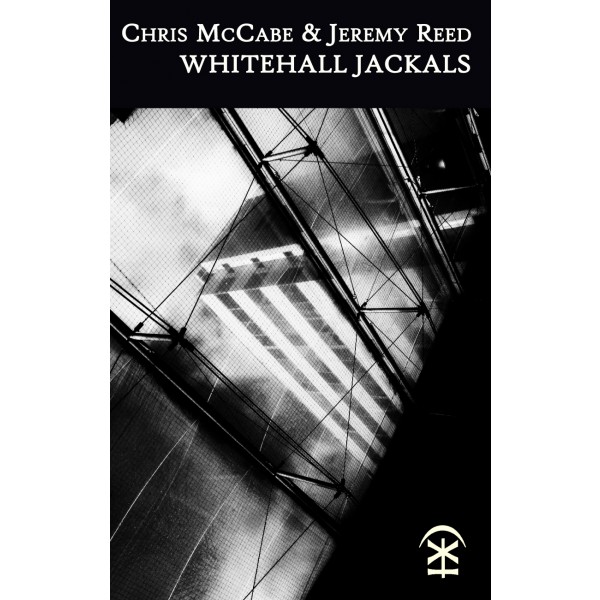 Whitehall Jackals is a collaborative poem sequence written by Chris McCabe, a Liverpool-born, London-based poet whose work is new to me, and long-standing British avant garde poetry landmark  Jeremy Reed. The work is a kind of psychogeographic plunge into London in alternating voices, a tangled weave of intersecting, parallel and divergent lines through and across the actual and imagined city, a pattern woven in the shadow of Blair’s war on Iraq and the City’s war on probity and community as the poets swap perceptions and realities with something approaching what might once have been called gay abandon.

Reed’s introduction lists a number of antecedents: Black Mountain, the New York School, the British Revival poets Barry MacSweeney, Tom Raworth, Iain Sinclair and J.H. Prynne; though I have to say I just don’t get Prynne’s presence here at all. The poems themselves reference more, among whom Blake and David Jones and T.S. Eliot are the most visibly present. The result, allowing for the differences in style between the two men, is a recognisably late 20th/early 21st century ‘experimental’ idiom in which the relatively high proportion of stressed syllables in the average line creates an insistent, almost relentless verse dynamic with sentences that are rich in nouns. Adjectives are piled one upon another in hieratic visionary utterances laced with verbs that serve to move us from one gesture to the next.

White static runs to the reaches of ceramics & wires
as the river chants its outtakes.

There are strong echoes of Sinclair’s 1970s poetry, specifically the two key books Ludd Heat and Suicide Bridge and of Blake’s prophetic books, but not the lyric voice of the Songs of Innocence/Songs of Experience, with consequences that I will return to later.

In many respects, I found it useful to think of this book in terms of the visual arts. Reed is a self-confessed plein air poet, writing a public life in public places, his words saturated in the here and now of their genesis, but also in his inner visionary not here, not now, as if Blake had painted after Monet.

McCabe is something more of a studio-based collage artist, carefully integrating bits of found language from text-bearing street furniture, product labelling and the like into his poems.

THE RIVER HOUSE, flagged by a lamp-post’s tag –
Do not dig within two metres of this mast.
Every view of Chelsea is a vista of weathercocks.

The jackals of the title are equally Blair and his WMD advisors and the Tory politicians who connived with their wealthy patrons in the yuppification of the city (the last quote above, for example, is from a poem called ‘The Chelsea of Wilde and Thatcher’ and there are other sections on the Docklands development). However it would be misleading to suggest that the focus is narrowly capital P political; there is a good deal of observation of the everyday life of the city and its residents and the geography they inhabit, as well as ruminations on its myth and history. As Reed says in one of his poems when writing about some wild poppies, ‘Like everything I see, they’re poetry’.

The inclusion of this less overtly political matter into the book provides much welcome light and shade and it is a pity that this range of content is not reflected in the formal aspects of the writing. The intensity of the versification works well for the most part, and as texts bounce back and forth between Reed and McCabe you can see them feeding off each other’s energies. However, it can become a little relentless, and this reader at least would have welcomed some more varied verbal music. In the absence of this more lyrical element, the reader can begin to feel that they on the receiving end of a magnificent but somewhat overwhelming harangue.

I also felt that the righteous anger directed at potentially criminal government actions and rampant consumer capitalism was somewhat undermined by the celebrations of the equally illegal illicit drugs trade and of the hardly uncommercial Rolling Stones, David Bowie and the likes. The conflation of drugs, rock and roll and rebellion seems somehow a little too easy, and more than a little dated.

These criticisms aside, Whitehall Jackals is a very interesting and worthwhile read. You can sense that the poets enjoyed doing the work and learned a good deal from each other in the process. Despite the reservations I have expressed in this review, their enthusiasm is infectious and you can’t help but be carried along by it. Anyone interested in the poetry of London will find it an important addition to the genre.

The Night of the Day by David Morley

March 6, 2011 Editor Comments Off on The Night of the Day by David Morley

2 thoughts on “‘Whitehall Jackals’ by Chris McCabe and Jeremy Reed”