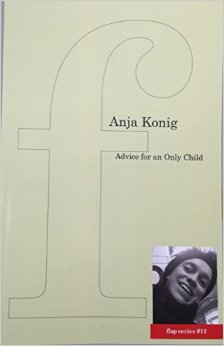 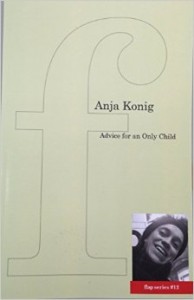 Anja Konig, who was ‘raised in the German language but now writes in English’, opens her pamphlet in an upbeat tone, declaring as a personal manifesto that she writes ‘the world being praiseworthy’. But there is scant praise in most of her poems; rather, Konig’s work has a laconic chill about it. The darker aspects of life grab her attention; death, disease, broken relationships. She does not romanticise. Straightaway she moves to a portrait of Battersea, and her praise is equivocal:

So much
to celebrate – cigarette butts
and daffodils, arranged
just so

‘April!’ she exclaims, channelling the cruellest month and the month for people longing to go on pilgrimages, describing: ‘the oil slick sand / with its silver Heineken cans’, perfectly capturing that elated spring feeling as it manifests imperfectly in a big city.

Places are critical throughout. In ‘Sight Seeing for Two’ Konig presents literal or figurative snapshots of places, representing the phases of a relationship as it crumbles. In ‘Triple Negative’ the Café Blunt lives up to its name, as the narrator and a friend meet and discuss the friend’s metastising cancer. That theme of the body as it fails is continued in ‘First, It’s Just a Couple of Bricks’; a sustained metaphor of ageing as a city under siege.

As we progress through the pamphlet, the tone remains cool, objective and neatly observational, with carefully understated anger just under the surface. Now and again there may be a hint of Konig’s mother tongue, as in ‘Darwin at the Car Museum’ where she coins some compound words. Cadillacs are ‘spickblue’. ‘Spiderferraris’ have ‘frontbulbs’. In ‘Belaubt Geglaubt’ (Leafy Believing?) autumn trees are ‘beleaved’ which synthesises the two words of the title.

Konig is still in London with ‘I Nearly Took the Twenty Four Today”. She asks a former lover to remember the time they had together:

Remember the mould, the leak, the water bills,
the boiler. I thought we were unhappy then.

She deftly poses questions about what makes happiness, about the pros and cons of being together, about solitude; when it is satisfying, and when it turns into loneliness. As we reach the title poem, about a child told to ‘Go out to play’, but having nobody to play with, she shows us how boredom toughens into self-reliance. In ‘Saturday 6am’ an adult reflects on being alone and says, with some pleasure: ‘I see the day / is mine / entirely.’

Nevertheless, the last two poems in this insightful pamphlet are actually celebratory. ‘Things / may be more / resilient / than we think’, she realises in ‘The Storks’. Then in ‘We Are the Bees of the Invisible’ Konig takes Rilke’s description of poets and considers herself not as a member of a noisy community (‘all that peer pressure, the hum / and hustle of the hive’) but as a solitary bee, making her own small offering of honey. As befits an only child, she seems happier that way.

November 25, 2014 Editor Comments Off on The Hard Word Box by Sarah Hesketh