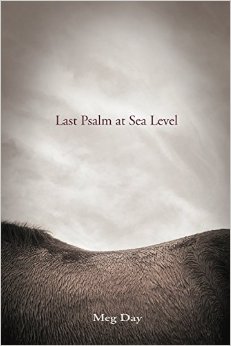 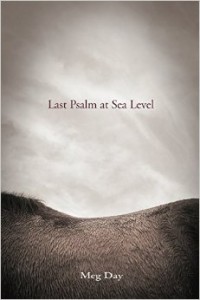 Meg Day’s first full collection of poetry, Last Psalm at Sea Level, is a big book: A substantial selection of poems on urgent themes (gender, sexuality, illness, bereavement, suicide, prejudice, violence, politics), written in intense and often beautiful language, which eschews the low key plain-speaking of much contemporary poetry in favour of richness of image and expression. Day has already published two chapbooks in the US, and this full-length collection showcases a poet whose voice is already established and sure. What impresses most, however, is that Day’s social, political (and even existential) engagement does not weigh the book down. There is no easy preaching or sentimentality here, rather an exploration of these pressing issues from the inside and through the force of poetic language.

The slippery nature of gender and the identities formed around it is very much to the fore. For example, a loose sequence of poems scattered throughout the collection describes the poets ‘selves’ in childhood, one a boy and one a girl. These finely observed portraits of the way children act when there are no adults around, suggest that traditionally gendered behaviours melt away in the imaginative space of play. For instance, in ‘Portrait of My Selves at Ten, as Father and Son’, we see the girl child, an aspect of the poetic subject, adopting a fatherly role in teaching the boy child how to skim stones:

Fit it to your palm, she tells him,

making her motions his. Cradle its edge
like you would the bent breath blown from a harmonica,
they lean back, or the curve of a breast

The lines which divide the male and the female are also blurred in what was, for me, the most memorable poem in the collection, ‘On Nights When I Am Your Husband’, which will especially speak to those of us in a same sex relationships who have ever (perhaps rather guiltily) wondered what their world would be like if those relationships met the conventional expectations of society at large:

I admire Day for tackling this fantasy of ‘normality’, which is for some perhaps a result of internalised homophobia, although not necessarily in Day’s own case. It does not get talked about in LGBTI communities a great deal: Unsurprisingly, since they have to spend most of their time fighting for the right to difference. I also admire this poem for treating the subject with such a lightness of touch, and ultimately for insisting upon the rights of love and its power to overcome society’s impositions.

Many of the poems in the collection explore the body’s sense of interconnectedness with the environment and with other bodies, its porous borders producing both a sense of threat in terms of dissolution (as in the poems about illness and death) and a potential sense of liberation. For example, in poems like ‘Sit on the Floor with Me’ or ‘On the Day I Buried My Singing’, the body and its senses are up close to the earth, feelings is movements. Or, in ‘Psalm for July’, the body of a dead calf is slowly absorbed back into the land

like the bulb that breaks ground
despite the rime: there one minute – shooting
green – & reborn in blossom the next.

As in Day’s poems which explore gender and sexual identity, these poems also challenge the fixity of identity, which – as in ‘Psalm for July’ itself – leaves open the possibility of transformation and renewal:

let my heart
be similarly preserved. Let this year
of bitter abandon leave me Ferdinand

in the face of her red cape facade.
Let the heat of those creatures’
hunger salvage all it can for reuse
& devour what remains […]

As this example shows, Day’s language is often dense in terms of its mobilization of metaphor, but by no means in detriment to the overall effect. These poems consequently require an attentive and thoughtful reader, but they also reveal new layers and constellations of meaning on re-reading. This controlled density, coupled with the poet’s willingness to address moments of personal crisis and tragedy, often put me in mind of Sylvia Plath. Day is also very good at drawing the reader in with titles, suggesting either a conceit which will inform the poem or an intriguing summary of what is to follow (e.g. ‘On Nights When I am Brandon Teena’, ‘After Getting Caught Staring, Twice’). These titles worked well in that, despite them piquing my interest, I never had the feeling I had been short-changed by the poem itself, which remained surprising despite – or perhaps because of – my thinking I knew what to expect.

In summary, then, this is collection which is both enjoyable and moving, both intellectually stimulating and emotionally persuasive. Given that Day is published by US independent Barrow Street Press, I can only hope that she also finds readers in the UK poetry scene, which small American presses can find hard to reach.