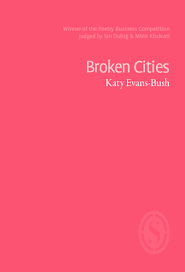 Broken Cities by Katy Evans-Bush was one of the winners in this year’s Poetry Business International Pamphlet Competition, judged by Mimi Khalvati and Ian Duhig, who praised her “joy, inventiveness and pleasure in the music of language”. The opening poem, ‘Don’t Look Down’, begins in the middle of a fairground rollercoaster ride:

Oh and then it stops. The cars seize up mid-track.
Don’t look down. Don’t look back
at the people you were a minute ago, where time and movement merge
on some crazy axis, where the verge
of up meets the cusp of down and blue is red
and violet rose and sugar and the engine’s dead
and kisses are sweet and love is said
to be the Word

The repetition and build up of rhymes through the poem, blurred images and colours, give a dizzying and urgent effect. Long sentences connect disparate thoughts into a continuous stream of sensations, as the surrounding countryside becomes a black hole, the trees painted over “and okay it will wash off in the rain but there isn’t any rain, / or wait. There is nothing but rain”. In the end, you are “mysteriously alone” in the rollercoaster car “alone behind the locked locked locked locked bar, / and now there is probably a clown. / I said: don’t look down”. The panic expressed in the repetition of “locked” is tempered by the humour. Reminding us this is the sort of thrill we pay to experience, and we do experience it.

This is Katy Evans-Bush’s second pamphlet. She has two previous collections with Salt, and Forgive the Language: Essays on Poetry and Poets (Penned in the Margins). Some writing advice she gives in one of these essays is not to bombard the reader with “how you feel, but [create] a space where they can feel it with you”. ‘The Great Illness’ and ‘Snowing’ appear on facing pages, both in memoriam to MCB, and both intensely intimate poems which work without referring to the ‘I’ of the speaker, but with an outward gaze that is warm, implicit and delicate:

everyday objects scrape and push and clatter;
their effort escapes him. So even the tiny leaves
can flutter on their tiny green stems
along confusing golden acacia branches,
what do they know?

In ‘Snowing’ we follow that gaze imaginatively into the ground, where “Dad’s dust must be sinking down, / politely sociable among habitual elements, / working the particled soil like a room”. Within these two poems, we’re given a strong sense of the man, his relationship with the world and the speaker, as well as sharing that space with them.

The scope of the pamphlet is impressive, taking in “The Republican Convention 2008”, with its guns and its flies and its cheering. To ‘Croonerisms’ which starts with Dean Martin, Perry Como and Bing, who “sure could sing: / it made him so rich he could afford to spend all his Christmases / on isthmuses”. Poems that range across a poolside lifestyle of dental work and martinis, funny and scathing (“the pool springs a leak and everything must be paid for. Fade to poor”). There’s a poem about Wat Tyler and the 1381 Peasants’ Revolt (‘A Dark Day in Smithfields’), and a 16th century prior, in ‘Prior Bolton’s Oriel Window’, that compares keeping “an eye on mass, and on his monks / at prayer and reflection in the cloisters”, with “the daily trumpetings of internet or telly”:

Through this glass we see our own Prior Boltons,
and they see us, with their data-gathering technology.

The window in this poem has a central motif designed by Prior Bolton: “a barrel, or tun – pierced with a bolt. / (Take a moment for the wit to sink in.)” This is characteristic of the confidence and acuity running through the poems, a translucence that helps the pamphlet retain coherence as it moves through time and subject. In his review of Evans-Bush’s 2011 collection, Egg Printing Explained, John Field says, “[it] puts a flippant Byronic swagger back into the serious business of poesy”. I think that sounds about right. Broken Cities is a joy.