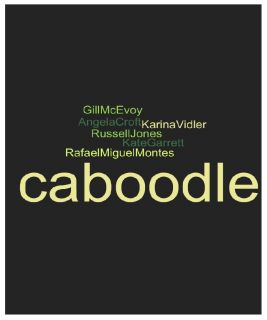 Caboodle carries the weight of six poets’ craft, experience and skill, but that weight is countered by humour, and accurate, pinpointed observations. The poems lighten the burden by being honed of excess baggage, lifting themselves from the page to be read silently or aloud. It’s an easy book to read, although individual poems don’t duck important themes or avoid awkward issues.

There’s no obvious, over-arching subject, but the poets all look at aspects of human relationships. Karina Vidler offers a wry take on love and family in middle-age, the problems of dating when you have the mindset of a twenty-something and blended families, e.g. in ‘Sue’s Boys’:

three for the price of one –
leave your marriage to one shattered man,
get a new man with two sons:
hey presto and the magic is done.

And in the new family photo
they laugh so loudly
you’d think they were trying
to block out the sobbing
of an invisible woman.

Despite its light tone, the absent woman lingers after the end of the poem.

Gill McEvoy’s poems encompass waiting for biopsy results and stoicism in the face of serious illness, as well as light-hearted love. ‘Lovers’ features tokens from exotic scarves to umbrellas:

And I am the girl left, interestingly,
with umbrellas – oh several of these
as if to say that whereas
love is fickle,
rain – in England at any rate –
is a reliable constant.

Russell Jones explores interlocking relationships in a community, through a series of sonnets. In ‘The Flat Opposite’, a boyfriend is watching TV while his girlfriend goes through the ritual of running a bath while setting out scented candles. Time

passes without consequence until she blows
out the flames and dresses in the flowers
of white smoke. She stops at the door, frozen,
flawless. He flicks through the channels as though
he’s never seen the goddess through my window.

The boyfriend’s complacent familiarity contrasts with the newness of the voyeuristic neighbourhood.

Kate Garrett looks at family life, relationships between sisters, the need to fit in with the in-crowd – or, failing that, any crowd – and first loves. ‘Grunge Girl’ speaks for the one who wasn’t accepted into the girlie gang, “faces lacquered with availability”:

You sprayed peroxide and lemon juice over
your dark brown curls; brassy, light at last –
streaks to coat with Kool-Aid rainbows. Your
sudden curves a pale burden to wrap in flannel
and someone else’s discarded city lights tee –
five dollars at goodwill is all you needed to disappear.

Her poems fizz with teenage energy, tempered by craft and experience.

Angela Croft’s work is calmer in tone, but still explores that human need to belong. Her poems are the most varied, geographically and in time, in that locations shift from the present day back to the 1960s, and look outwards rather than inwards. In ‘Angel’, a man finds a passport left behind on a London Tube train:

didn’t hand it in
kept it buried in a drawer
under a tangle of socks and ties
takes it out from time to time
to consider her startled eyes
her speechless mouth
the place where she was born
wonder at the foreign name
that slavers on his tongue
as he seals her in his wallet
shields her from the sun.

Rafael Miguel Montes’s poems describe struggles with obesity and the collusion of family in denial, hindering rather than supporting. His poems are self-deprecating, using humour to make serious points, avoiding moralistic judgements. In ‘Menu’:

Far too long the taste of cope has been a mix of tears and frosting.
That flavor is tangled tight around my double helix;
it’s the very drywall of my fat body.
I’ve never tried on a pair of forty-sixes –
never walked into one of those stores.
But I’ve map-quested my future; catalogued my kin.
There are many, many drive-thrus between here and the ICU.
Such great pizza near the cemetery gates.

The narrator knows he’s at fault, but ignoring the emotional relationship people have with food in favour of an “it’s simple, eat less” approach does no one any favours. The speaker doesn’t ask for sympathy, but tells his story, shows the ease and availability of fast food, how it nurtures, and how relationships can hinder rather than help efforts to lose weight. Like the other poems in Caboodle, these are compassionate works.

Caboodle allows each poet a pamphlet-length sequence, so readers have a chance to get a feel for each of their voices, as well as dipping in and out, reading poems individually. The poets’ voices are varied, but linked by compassion. This is a good way to read familiar poets and discover new ones. Personally, I appreciated being able to read several poems by each poet, because it gives me a better feel for whether I’d want to read more, rather than just reading one or two of their poems in a magazine. The quality is consistently high; there may have been the occasional poem that wasn’t to my personal taste, but I could always appreciate the poet’s intention and craft. A rewarding anthology.

Schooldays ed. by A . B. Cooper, Ellie Danak & Sarah Miles