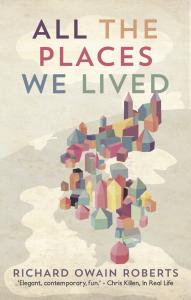 Halfway through Richard Owain Roberts’ All The Places We Lived, my husband leaned over my shoulder and read two sentences.

“Reads like an instruction manual,” he remarked. He wasn’t wrong, but wasn’t quite right.

“More like the description of a photograph,” I said, after some thought. 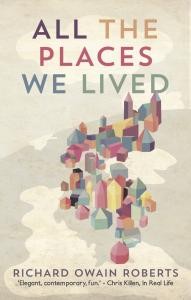 The short stories that make up this brief collection roll along like a series of still images, captured and explained in regards to one particular moment in the life or lives of the characters. We see as men and women fill pints with tap water, talk to themselves, send emails. Very little in either direction of their lives is revealed – perhaps a glimpse backwards for some context, but never into the future – making them read like tiny islands of human experience. Snapshots of what it means to be human.

For the author, being human means a very particular brand of self-sabotage and misanthropy. Every character feels slightly out of their depth, or perhaps too deep in their own lives, to be comfortable. They seem to be on the edge of a parapet, their actions random and unpredictable. In the titular three stories, a series following the same couple under three separate names, their struggles are amplified by their own inability to keep from messing up, from leaving their jobs, from burning bridges with their landlords. The only stability in their lives are each other, and even that can be doubtful given their volatility.

Roberts’ doesn’t attempt to moralize or rationalize the behaviour of his characters. He is more of an observer, documenting each interaction and each movement without commentary. His prose balances starkness with a unique lyricism borne of repetition, a flowing sort of growth from sentence to sentence. The writing is lean, with no extra filler to soften its harsh edges.

Two of the stories – ‘The Francos’ and ‘Explicit/Rare Communications’ – focus on celebrities. In ‘The Francos’, short vignettes of James, Dave and their mother Betsy Lou reveal a long secret pain caused by a rivalry between Betsy Lou and her mother-in-law. She wrings her hands over whether she did the right things raising her two sons, only to be suddenly reassured by a simple and light-hearted email.

In ‘Explicit/Rare Communications’, Kanye West sends elaborate and philosophical emails to Kim Kardashian. Here, Roberts creates an interior world that’s both insecure and deeply analytical for Kanye, grasping at something larger while concerned about the every-day. While strong throughout, the story ends with the indication that Kim is typing a response, but a response we never see. It feels like a missed opportunity, given the depth of character explored with Kanye, to avoid doing so for Kim.

Taken as a whole, All The Places We Lived is a fast and enjoyable read. Each story is a mere handful of pages long, and the prose moves quickly enough to keep from being weighed down at any one point. Although the stories themselves teeter between the mundane and the dark, Roberts’ handles it in a way that feels more like life than other, weightier tales. There’s good and there’s bad, there’s humour and there’s sadness. It all funnels together to make a cohesive and well-rounded picture of life today.

The Missing Woman and Other Stories

March 14, 2016 dj4twinx Comments Off on The Missing Woman and Other Stories

You Used To Hurry Home by Angelika Rust

September 8, 2015 dj4twinx Comments Off on You Used To Hurry Home by Angelika Rust