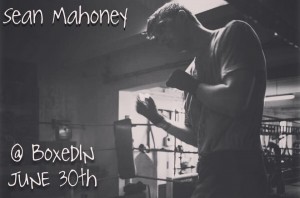 Where have all the open mic nights gone?

With Bang Said the Gun stopping for their summer break, Chill Pill yet to release more dates and stalwarts like The Word House and Come Rhyme with Me closing their doors for good, London’s poetry scene is a bit thin on the ground at the moment. Come September things are sure to hot up again, but it feels like their might be space for a new night or two.

Not everyone has shut up shop quite yet though as BoxedIN, hosted by Greeds and Sean Mahoney, celebrated its 3rd birthday earlier this month. This free event at Boxpark in Shoreditch was jammed on a roasting Tuesday evening, packed with 28 open mic’ers plus features Barbican Young Poets and Caleb Femi.

It being a heatwave, Boxpark was heaving and extremely noisy and Sean and Greeds’ first challenge was to be heard over the din. From start to finish, however, the snappy 2-hour night was infused with their warmth, camaraderie and efficiency. They were laid back but helpful (‘remember to project into the mic’) and their obvious professionalism shone through as every little detail was arranged to make everyone feel as welcome as possible (down to sharing the private toilet code), from making sure the open mic remained quick-fire with firm-but-polite rules (‘that’s three minutes, not an intro plus three minutes’) to providing gentle heckles for any passerby who happened to walk across the performance area; they’d even arranged some free jaffa cake cupcakes!

Open Mic lists; They’re like a box of chocolates…

The open mic was characterised, as ever, by a huge diversity of styles, subject matter and delivery, some good, some outstandingly good and some…interesting. The  BoxedIN hosts did what all good poetry night organisers do, and made anyone and everyone welcome on the stage. Taking their lead from this, the audience listened attentively and drew the event together (despite the background noise). Even better, there were loads of casual drinkers and diners who stopped to listen.

Highlighted performances from the huge open mic list are;

The Dreamer; Niché. A young female performer with a political slant to her descriptive narrative driven verse. Sometimes her stories meandered a bit, but it was a pleasure to get lost in her raw streams of consciousness.

The Wild Card; Tony Wong. His exuberant personality and unique delivery style won over the audience and although his poem about feeling isolated in a foreign country and experiencing racism were hard to listen to, the performance seemed cathartic. One of several open mic performers who tackled their subject with assertive honesty.

The unexpected gem; Vanessa was a singer who turned up after a long train journey with her guitar and, according to Sean and Greeds, was crestfallen when she realised it wasn’t a music night. Her acapella performance of her own song was about exclusion and the unkindness of strangers. I don’t know what they told you to believe was completely magical, her voice haunting and my personal favourite performance of the night.

And the one to watch; PJ. One of several extremely cool young guys in natty shirts. His articulate and thought-provoking verse ‘if their not inside the paradigm they’re fine to be ignored’ stood out as having a maturity and complexity to it that took his performance above the ordinary.

Many of the other open mic’ers not mentioned here were excellent poets and all shared the same enthusiasm for an art form that is as diverse as the people who participate in it.

There were no breaks between acts, instead the features were sandwiched in between two breakneck speed open mic sections. The three poets representing the Barbican’s incredible youth poetry programme (run by Jacob Sam la Rose and Jasmine Cooray) were Omar Byron, Victoriana Bulley and Michael Elcock. Taking it in turns to perform two pieces each, the poets chose work that complemented their peers. Omar‘s high octane persona was initially a little full-on, but he harnessed his energy into a controlled performance of a poem about his Grandfather, his gentle verse (‘brown pictures from borrowed eyes’) speaking truthfully about age and heritage. Michael also spoke about his family ‘you know when you’re speaking to your mum and you’re like, you’re sick’. His poem began ‘Mum spelt backwards is mum’ and used a frenetic rush of images to describe how your closest relationships can help you escape the need to be defined by other people’s words. Comparatively, Victoriana was a much more fiery performer who spoke passionately about political and racial issues: ‘A white lie that only you are privileged enough to keep telling yourself’. While I felt she could have varied her tone a bit more and taken more risks with rhythm and metre, she more than made up for this with challenging and angrily dignified verse.

Thanks to some extremely active youth programmes at top London arts venues, poetry collectives provide young poets a fantastic opportunity to learn from professional writers and get the chance to perform. One such is Roundhouse Poetry Collective, who have mentored many superb performers including including second poet Caleb Femi – fresh from winning the 2015 Roundhouse Poetry Slam a few weeks ago at The Last Word Festival. He performed three thought-provoking and impassioned pieces about heritage, soul-searching and family saying ‘what are poems if not nomads, reserves of the soul we pick up on our journeys’. His last poem, which also won him the Roundhouse competition, We are the Children of the Narm, was a piece about being part of a group of young people from Peckham, growing up in their in last couple of decades. This incredibly wise poem has a resonate, repetitious rhythm and deals with the story of a group of young people with mixed heritage, their sense of belonging to two different nations and the tensions and problems within their lives that can cause. Like Victoriana, Caleb’s verse has an undercurrent of righteous anger, a sense of injustice and a thirst for speaking the truth. The poem is all the more poignant because he is speaking frankly about his own generation and community in the second person.

London’s poets are younger, more numerous and more prolific than ever and nights like BoxedIN provide a welcoming community that is the perfect place for emerging poets to share their talents. Watch this space London the poets are coming to get you!

Catch the next BoxedIn on 28th July with Ross Sutherland and Tania Rose.