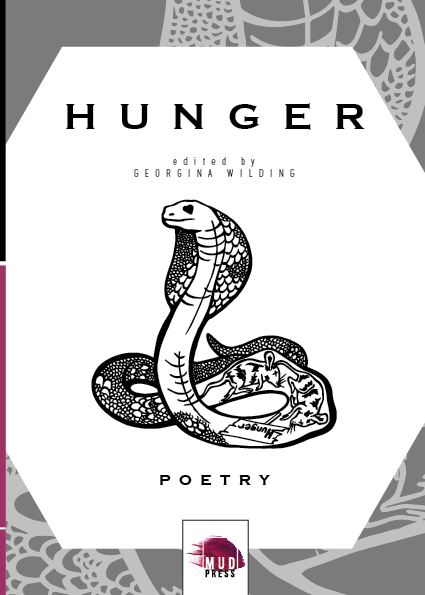 Georgina Wilding, the editor of Hunger, opens this anthology by rhetorically asking “but really, does hunger not cover the base of all human intent?”. Odd syntax aside, this sentence indicates that she intends to cover a wide swathe of human experiences over the fifty-four pages which follow her introduction. That’s a large promise to make, but the heft of the book implies that the authors represented here stand a chance of keeping it.

Unfortunately, despite the length of this anthology, there are only ten pages of poetry, by ten authors, to carry the load, and almost every poem revolves around the theme of sexual hunger. I’ll return to that point in a minute, but first I want to say a few words about the construction of the text.

Mud Press has very high production quality. The cover has been beautifully designed and it is printed on a high-quality slick cardstock. The black-and-white image of a hooded King cobra (its stomach cut away to reveal a meal of mice) dominates the cover, above the vivid mauve smear of the imprint’s logo. Inside (and taking up a full quarter of the pages) are hi-res photographs of the anthologized poets, often centred on a single feature or detail (an eye, a nose, a pair of artistically-dirty trainers). The poems themselves occupy eleven pages of text. The rest of the space is occupied by notes, written by the poets, explaining the poems to the readers. Although some of the notes were revealing (in good and bad ways), these notes were the most superfluous detail in the book. If you have to explain a poem to your reader, it doesn’t work as a piece of art. Poems should be able to carry themselves. The space would have been better used (and the readers better served) by replacing these statements with a larger variety of poems.

As for the poems, the most interesting one in the book was the only one that had nothing whatsoever to do with sexual appetites. Georgina Norie’s ‘Vulture’ was about the self-consuming nature of grief. She writes:

Your liver, kidney and intestine
were green with cancer. I ate them.
Clamped them into my jaw and dared
the cells to multiply. They were already dead.

The images are visceral, and profoundly disturbing; but then so is loss — especially the loss of a mother. This poem is not healthy, but it is very good. The speaker knows that she’s “addicted to picking at your corpse”. She’s “trying to stop”. If all ten of the poems were willing to risk as much as this, the anthology would be worth buying, whatever the cost.

Dean Atta’s ‘Undetectable’ was another interesting contribution. He treats the consequences of satisfied hunger, as well as the sensation of desire:

He told me he was HIV
positive but that it was undetectable. I didn’t know
what that meant at the time; when I looked it up online
it made me think of God, laying dormant inside me.

The laconic tone and final image are striking, and refreshingly intimate.

Other poems, like Joshua Jones’ ‘I, Hannibal’ (referencing the murderer, not the military man with a penchant for pachyderms) are less effective. This poem has some effective lines (“Cannibals don’t eat their enemies, / we eat those we love”) but it could have used some serious editing. There are a lot of wasted words:

When I see you bequeath company to others,
I do not rejoice in your happy friendships.
I am jealous and hate you for it.
Love like that can be 90% hatred and still call itself love.

That last line, by the way, was transported from CS Lewis’ ‘Till We Have Faces’. It originally read, ‘Did I hate him, then? Indeed, I believe so. A love like that can grow to be nine-tenths hatred and still call itself love.’ It lost something in transit.

The cost of this anthology is eight pounds – ultimately, unfortunately, it isn’t worth it. This anthology has a lot of style, and it includes some very good poems, but in the end it is lacking in substance. The ratio of good to mediocre work is skewed away from the good. However, this editor is serious about her work. She’s got a good eye for design and a passion for producing quality books. Her next attempt will be something to look out for.