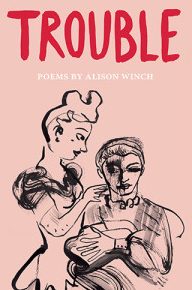 Alison Winch’s Trouble is published by the Emma Press, and is an object befitting the quality of the work inside: beautifully designed and approachable, these pamphlets beg to be picked up and perused. A glowing introduction by Sarah Howe also proves enticing.

Winch is a lecturer in Media Studies, and her poems have a certain erudition about them, with a sequence that references Chaucer (replete with Middle English spelling and syntax) and poems after Baudelaire, Rimbaud and Muldoon. These references are worn lightly, in a witty collection which approaches the title’s theme of ‘trouble’ through a distinctly feminine (and feminist) perspective.

The pamphlet begins with ‘On the Manner in which Wife introduces Her Self’, from the sequence ‘Of Wife’, poems from which are scattered throughout the pamphlet rather than grouped together. This short poem provides a perfect introduction to the pamphlet’s themes; desire, womanhood, and the troubled consciousness rumbling beneath the trappings of femininity:

On this body is a head, I explain, and in this head is a pack of
spaniels, a pack so dense they are a mind. And they fawn over men.
Men made up of golden light, muddy crystals, kissing cherries.

The subject’s conflicted mindset is communicated with a clarity which is the hallmark of Winch’s work; nothing is simple here, but there are flashes of beauty, and the ‘trouble’ of the pamphlet’s title is always addressed with a wry sideways glance. Never more so than in ‘The Tea Table’, the second installment in the sequence, beginning with the attention-grabbling line: “When the marriage counsellor kissed me we were in the long eighteenth century…”

The theme of how women experience sexual desire within the ever-evolving and ever-contested notion of female identity (an amorphous trope that Winch interrogates with glee) is addressed in ‘Alisoun’s’, the pamphlet’s second sequence. This is a refreshingly bawdy response to Chaucer’s ‘The Miller’s Tale’, told from the point of view of the poet in disguise (Alisoun/Alison). The sequence is shot through with humour, and successfully emulates the alliterative music of Chaucer’s language. There’s a deeply tactile sensuality at work here, which overrides any concerns about the poem’s potentially niche appeal:

There are also joyful moments of direct address in which Alisoun’s voice comes alive:

The pamphlet’s third sequence, ‘Expecting, the Gourd’, again takes a refreshing approach to a subject broached often in lyric poetry: the experience of pregnancy and childbirth. Winch’s unexpected and often startlingly original allusions invite me to a more intimate and yet more ambitious contemplation of the joys and longueurs of becoming a mother:

This is your bed now lie in it: ectopic pregnancies,
Bacchus, Pan, folic acid. All your hang-ups will pass to your child.
He’ll spur you here with all the kisses of his mouth. It is your choice –

The shorter lyrics in the collection also tremble with the tension between vivid imagery and idiosyncratic subject matter. ‘Eastbourne’ invites us to a sad end-of-relationship tryst in a run-down hotel, in a town where “Women[s]…hearts are clamped on their faces/ hard as wedding bands” and service stations are described as “a piece of the universe that love forgot.”

Poetry finds an unusual home in the bookies in ‘Eastbourne’, where a couple reminisces about ‘sharbing’ in local betting shops in their early days, and in ‘My Generous Hosts’ (after Charles Baudelaire), where the author is beckoned “into a subterranean dwelling of astonishing/ luxury: Ladbrokes.”

A seam of loss runs through the pamphlet too, with a number of poems that deal in a characteristically unflinching style with the decline and death of a beloved grandmother. The pamphlet ends with ‘All the Affairs are with my Grandmother”, a clear and ringing statement of love: “I’d let her kiss me, old and dead as she is.”

‘Trouble’ is an intriguing palimpsest of a much longer collection, a sampler that leaves me eager for more. 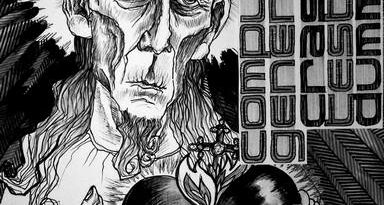