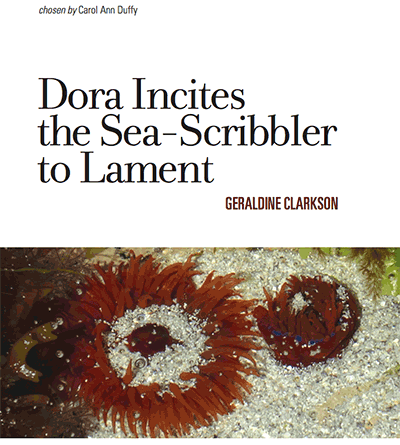 Dora Incites the Sea-Scribbler to Lament, one of the latest round of laureate’s choices from Smith Doorstop, is an energetic stretch of tenderness and irreverence, made elastic and precarious by its ever refreshing language. Poems speak of the entanglement of place and relationships, to the point that there is no real distinguishing between the two. In the title poem, an encounter (which seems predominantly to happen in parentheses, ‘like carapaces’) rises from the ‘rubbery weed’ that is both strand and the desired body, and extends to the ‘swell of mouldering green’. In ‘When they say Connemara’, place is rendered between the physical geography and its fauna, those who people it, and the embodied memory impacting the speaker’s actions. Despite this poem being so full of image and sensation, it ends with

the empty rule of wind
on that thin mile
of white sand, the collapsing
surf, the whistle of silence

– essentially the intangibility of memory, which has become wistful, nostalgic.

Other poems focus in on the particular, the closer sensations of love and desire. ‘Caress’, the shortest poem in the pamphlet, wrings out the sense of lust, of yearning, of requited physicality in eight lines, the longest being four words. The form ‘twists’, splaying an almost-hourglass shape that wraps sensation with image and visual setting on the page.

Form is played with and extended elsewhere: ‘snow rules’ describes a day venturing out as snow falls, its phrases slipping loosely across the pages, the only punctuation in spaces and line breaks, careful detail weighed with stresses as slow footfall across the whitening city cut into sly jokes, then a piling of images and sights as the snow whirls. Other poems act as companion pieces: although ‘Hasfallen’ and ‘Goodbye Henna Goodbye’ sit on two sides of the same page, and therefore do not appear as traditional facing poems, they share preoccupations with concealment and hope, overlapping images of autumnal mulch, and a sense of lineage both encouraged and curtailed. This echoing of ideas that reach beyond where they are seeded expands both poems, turning up their musical tones as a duet might.

All the while, between the interplay of poems, the ratcheting up of language, the light humour, the curious relationships, many personas tremble their way through these poems, some with more vibrato than others. In ‘A Less than Sainted Summer’ the domestic is upended by how relations behave – perhaps as they usually do, but the sense is that things are, once again, precarious, uncertain, potentially catastrophic. The narrator reveals her present self to be an anxious, seemingly perfect, hostess to her past and future selves, who are simply enjoying themselves, ‘languishing / on the leather sofa … locked in gossip’.

This more surreal, if imaginatively plausible, situation, stacks up the levels uncertainty for Nuala (the Nightwatchman’s daughter), who blurts ‘a word of solace to herself or some straggler, / alert to the closeness of danger, and of Death coughing his guts up’. Nuala, for some reason, acts as a forewarning, for me, of Miss Marple’s temporary respite, as she ‘loosens her bra, flicks dust and cottagey debris from the sill / and leans bare elbows through the lattice’. This moment of hard-won relaxation lasts only minutes, but within it Miss Marple shrugs off much of what seems to haunt Nuala on her somnambulistic wanderings.

These half-hinted connections between poems, the uncertainty of their inhabitants, the unfinished nature of the relationships, the loose threads that are picked up and dropped are what make a pamphlet such a satisfying read: short enough for the poems to linger, resonate and echo as they accumulate in the reading, and complex enough to pull you back in to find new new seams. These poems seem to reach for connection, for love and intimacy, while always acknowledging the wariness of such desire, the potential dangers of closeness. Ultimately it seems they are saying, through acrobatic, vital language, that it is worth it, whatever happens.

March 20, 2015 Becky Varley-Winter Comments Off on Steps by Mark Goodwin