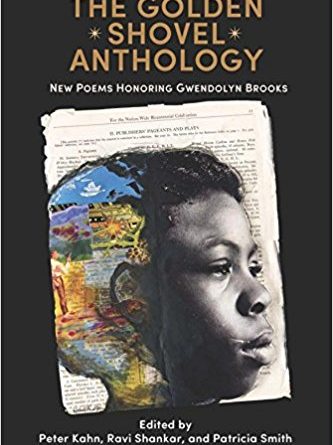 The Golden Shovel celebrates one of the most influential American poets of the 20th century, using a technique somewhere between a verse form and a writing prompt: the “golden shovel.” Gwendolyn Brooks was the first African-American poet to win the Pulitzer in 1950, and remained what Smith calls “Queen of the Colored Girls” in the Chicago poetry scene, hugely respected and loved across the rest of the country, until her death in 2000. In homage to her, Terrance Hayes wrote the first golden shovel poem in 2010, and after seven years’ of its use across the globe by other poets and within writing workshops, Kahn, Shankar and Smith have created this anthology of the form.

A “golden shovel” poem is easy to illustrate. The poet takes a line from a Brooks poem and runs it down the line endings of the new poem, so that, for example, the first three lines of Hayes’ ‘We Real Cool’-inspired poem run:

When I am so small Da’s sock covers my arm, we
cruise at twilight until we find the place the real

The name for this form is taken from ‘We Real Cool’, which is frequently taught in US high schools, and begins with what looks like a playwright’s character description: ‘THE POOL PLAYERS./SEVEN AT THE GOLDEN SHOVEL.’ One poet in this anthology, Brit Mags Webster, brings The Golden Shovel to life as a bar, in which the narrator has a romance with the ghost of an addicted girl. For the rest, it’s only the use of this new technique which turns the anthology into a shady bar filled with glimpsed characters, voices, and short, intense stories shared beside the jukebox.

The Golden Shovel contains over 300 creative conversations with Brooks’ work, from poets ranging from international luminaries to high school students. Some of the most touching contributions are by young poets, who passionately reclaim Brooks’ words in the service of contemporary activist writing. Chicago undergraduate Kelly Reuter responds to Brooks’ ‘The Blackstone Rangers’, about a 1950s Chicago street gang still active under the name ‘Almighty Black P. Stone Nation,’ with a haunting narrative about her brothers’ shooting death, in a world which has ‘taken the corpse of the city/ and hung it by each of its limbs.’ The spirit of protest continues in poems from the UK, Australia, India, and more. While there’s no requirement for a “golden shovel” to talk back to power, the fact that so many poets have responded in that way shows the kindling of change that Brooks’ poems can create.

Some maintain only a lyrical connection to Brooks’ work, speaking on different subjects and preserving only the vocabulary of the chosen line or lines. Others bring out hidden or alternative views, including Chicago-based Hannah Gamble’s brilliant response to Brooks’ ‘Boy Breaking Glass,’ which brings out the underlying gender dynamics in Brooks’ line ‘I shall create! If not a note, a hole.’

Many elaborate on or alter Brooks’ own characters or situations, or bring tangential new voices into her poems. Brooks was known for intimate portraits of neighbourhood characters – her Pulitzer-winning Annie Allen tells the whole life of a Chicago woman – and there are a lot of portraits in this anthology. My favourites came from ‘The Bean-Eaters,’ about an impoverished ‘old yellow pair’ who nonetheless enjoy their memories together. Nicki Giovanni celebrates this couple as an ‘honest upstanding pair’ who ‘See the evening of life as a treat to eat’; Sandra M. Gilbert’s ‘The Fava-Bean Eaters’ moves the point of view to a rich couple eating ‘Breton lobster salad’ as Brooks’ bean-eaters ‘peep’ at them through a restaurant window. Meanwhile, hip-hop artist Christian Robinson/ Rich Robbins talks of threats to the satisfied married life the bean-eaters enjoy:

Now, my grandmother forgets to mention “they”
when she speaks of my parents […]

And a Black bean. From same family but mostly
on different ends of the garden.

Multiple viewpoints on the same image – like an elderly couple eating beans together – make the anthology into a public space in which writers talk to each other, to Brooks and to themselves, retelling and questioning her stories.

Some poems, including Sharon Olds’ ‘Thanks to Miss Brooks’ and Jon Davis’ ‘On Gwendolyn Brooks’, directly pay homage to her, but many more subtly write into the beauty of her lines and tease their meanings. Clare Pollard’s ‘Boy Breaking Glass, Peckham’ replaces Brooks’ boy with a boy smashing a shop window in the 2011 riots, and ends in a triple repetition of Brooks’ strikingly contemporary description of a broken window:

Elsewhere, Sandra Beasley’s ‘Non-Commissioned (A Quartet),’ inspired by Brooks’ examination of World War Two draftees, ‘Gay Chaps at the Bar,’ contains one section consisting of nothing but the turn of Brooks’ sonnet made vertical, emphasising both her collaboration with Brooks and the heart-breaking guilt of boys becoming soldiers:

But
nothing
ever
taught
us
to
be
islands.

Perhaps due to the power of Brooks’ portraits of unconsidered people, her lyricism is rarely stressed, but when decontextualized, lines like ‘he swallows sunshine with a secret yelp’ (‘Sundays of Satin-Legs Smith’) or ‘these graves grow no green that you can use’ (‘To the Young Who Want to Die’) shine. Their inclusion in a ’golden shovel’ poem, together with the poem’s own strength and the memory of Brooks’ work, form a new contemplative space. Read The Golden Shovel with a Brooks anthology next to you (Blacks (1987) contains her entire canon). Read it with a notebook beside you, too. Brooks’ electric lines inspire immediately, and the variety and beauty of these poems create plenty of space for new voices to join in.