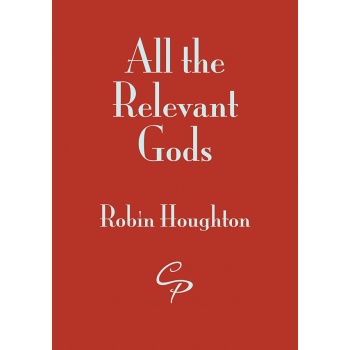 “I thought I knew this country” Robin Houghton writes in ‘Old ground’ – “how small that thinking was.” All the Relevant Gods contains many eloquent meditations on place, here exploring a map that depicts lakes and forests from above: “It’s as if a god’s waters broke and she never went back / north to where crocodiles lie for weeks in dirt / waiting for the wet – up there in the desert”.

I’m immediately reminded of Elizabeth Bishop’s ‘The Map‘, which is a likely influence, as there’s a similarly precise and self-interrogating mood in ‘Old ground’. However, while Bishop’s map is defined by the appeal of countries perhaps never visited, known through archetypes, traversed by trade, Houghton focusses on personal memory, its blind-spots and distortions. As the land shifts from the personal to a birds-eye view, it’s as if the speaker’s intimate, foetal, half-blind understanding of the country breaks apart like the ‘god’s waters’ falling into lakes. An unnamed “you” shows the speaker elements of this landscape that were invisible to them, places that they are unable to pronounce, the map re-folded in the speaker’s pocket, “spring-loaded, ready to bounce away.”

Some poems in this pamphlet contain a one-two beat of question and answer, and while these structures are still effective, the poems that stay with me the longest after I close the pages are those that seem to search for answers that cannot be given, resonant no-man’s-lands hidden beneath smooth surfaces. Houghton is especially striking on corporate culture, writing poems set in meeting rooms and hotels, such as ‘She discovered the internet’:

[…] Somewhere between
the door of the blue meeting room, heavy with meaning –

form follows function – and the tubular chair, I stopped believing
in my hard-copy life, in cushioning, in adiprene™ and in everything

I’d learnt, or said, or done before that day. This had to stay secret.
I guarded it like a cat guards a bird with one wing: mine, mine.

This winded/wounded ending is followed by the excellent poem ‘Four Star’, with its half-grotesque opening line: “I’m stuck to this spot like a leech drawing blood. / Half on a queen bed, half off.” Hungover after a one-night stand, the poem meditates “How easy to mistake colleagues for lovers / hotels for havens”. It’s both sexy and melancholy, basking in hotel blues.

Houghton also writes about the seemingly dead greys of London, commuter lines and closed factories. These unsettled poems move over the body of the city as if its aches can be located but not healed, thriving on buried traces.

There is also joy in this work. Houghton’s final poem, ‘Two Honeymoons’, shifts from potent loneliness to companionship. The first honeymoon she recounts is faded, recalled through distant photographs with “a blurred expression”, but the second is full of warmth:

[…] Every night, in this church or that
we could have heard the Four Seasons by candlelight,
we talked of it but never went, and instead grew fat
on the silence of lapping water and our own mystery.
Winter was over and Spring sensed our impatience:
we didn’t know how long we had, […]

All the Relevant Gods is persistently compelling. In ‘Two Honeymoons’, couples themselves become a shared landscape transforming the city around them. Without emotional connection, these poems seem to say, the places you inhabit die to you too. The heart is also a place.

2 thoughts on “All the Relevant Gods by Robin Houghton”