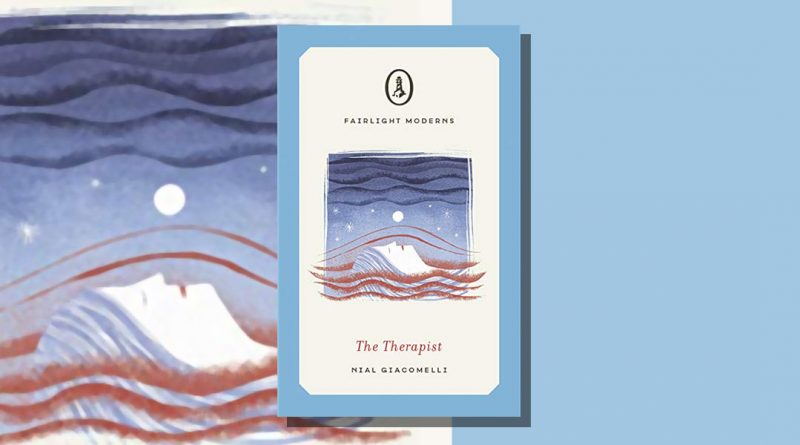 A man and his wife travel separately, as heavy snow begins to fall, through a landscape of crumbling buildings to a house which the man describes as being like something out of a Shirley Jackson novel. They go there, to this place of potential horror and mystery, for a first meeting with their therapist. The scene is set for an unsettling story.

Published by Fairlight Books in their excellent Fairlight Moderns series of short fictions, The Therapist is Nial Giacomelli’s debut novella, developed from a science fiction short story. Asked to describe the book in one word the author chooses ‘dreamlike’. Dreams are woven through this tale of loss and grief. The couple at the centre of the story live in Chicago. Their child, Phineas, has died young, in an accident. The father narrates the story and we hear little directly from Simone, the child’s mother. Except her oft-repeated statement, when she wakes in the morning and turns to her husband – ‘I dreamt we were at sea.’

As the couple wrestle with their feelings and try to hold onto their relationship, a tragic drama is playing out on the other side of the continent. A mysterious epidemic is causing people to fall sick. In the first stage of this, as the body is racked with fever, ‘the mind retreats inward, to the sanctuary of dream.’ Following dreadful physical consequences, people’s bodies disappear. Is it death, or some kind of metamorphosis? This is something the couple discuss with their therapist, as they explore their feelings about what happened to Phineas, loss, blame and how to go on.

The spread of the epidemic, seen through the screen of the TV, mirrors and amplifies the changes in the relationship between the couple, now that a central part of it has changed.

Giacomelli’s exploration of the nature of grief is specific and forensic. In their early visits to the therapist, the dead boy’s father wants to talk about change, but says that instead they discuss their dreams: ‘we talk increasingly about the regalia of loss.’ It is an interesting word to choose, ‘regalia’, with its connotations of royalty and things to be held in esteem. It holds them in thrall to a past which cannot, however much they try, be pinned down like a butterfly, its beauty burnished and fixed. There is too much mixed emotion for that. As the meetings with the therapist continue each week:

“We sit beneath a painting of the sea and talk about the weight of absence. How after the accident we had both begun to see the body of our own grief. We had watched as it was born, fusing bone and knitting skin”.

The body of their grief engenders anger, for Simone directed inwards, for her husband outwards. Giacomelli conveys the growing distance between them in the strong repeated image of the man looking – or not needing to look because he knows what he will see – for his wife in the rear-view mirror as he drives away. She is like a ghost, surrounded by smoke.

If the book is dreamlike, the dreams have a geography, albeit one that changes unpredictably, as is always the case in our dream worlds. Sometimes a narrative that employs the stuff of dreams can be difficult to read, but this one is succinct and clear.

The author uses vivid and evocative images: the lion door-knocker on the red door of the therapist’s house, the distant sound of a voice in a TV broadcast, ‘like glass scraping glass’, and a painting of a calm sea, ‘clouds looming on the horizon.’ The use of a neighbouring family with contrasting circumstances, and the approach of the epidemic, helps to highlight and frame the central story.

If Simone remains elusive, her husband is scrupulously honest about his shortcomings, saying:

“It’s with a dull ache that I must admit to romanticising the act of disappearance. For as long as I can remember, whenever the cacophony of my life has reached an unbearable pitch, I have considered vanishing… I found a calming, almost meditative bliss in the notion that a name, an entire life, could be abandoned.”

Not that he actually attempts to leave; he is, when he has these thoughts ‘a spectator watching an alternative version of myself.’

There remain mysteries in the narrative and what happens at the end of book is ambiguous. I like a closing with ambiguity ; it draws the reader into partnership with the author in deciding where to go, what reality to embrace, or what dream to pursue.

Find out more about The Therapist on the Fairlight Books website. 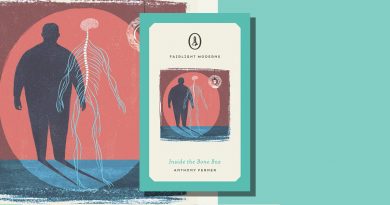 Inside the Bone Box by Anthony Ferner

July 28, 2021 Phil Olsen Comments Off on Inside the Bone Box by Anthony Ferner