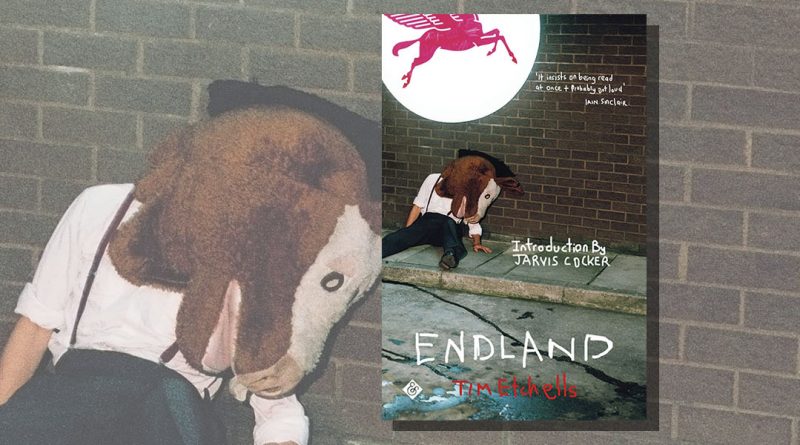 Performance artist Tim Etchells’ Endland (published by And Other Stories) brings together recent stories with pieces first published in the nineties, all set in a darkened, twisted mirror image of England populated by ‘kings, lords, liars, goal-hangers, killers, psychics and prostitutes’ whose fates are played with by a cast of gods. Etchells plunders narratives and images from kitchen-sink soap operas, fairy tales and fables, using a blunt, slang-inflected prose reminiscent of Kathy Acker. Like Acker, he displays a penchant for the sexual grotesque, the use of all-caps and wilful misspellings, as well as little interest in the conventions of realism and character development — in his afterword, Etchells writes that his intention was to experiment with ‘how disposable [he] could make the world and the characters populating it, while still somehow keeping an engagement with the reader’.

This is a difficult balance to achieve, and when Etchells succeeds, as in the first story ‘About Lisa’, the results are surprising, funny and affecting. The first paragraph serves as an excellent introduction to the collection’s blunt brutality and setting which is familiarly English in its exaggerated tawdriness:

“The boss at DAVE’S TOPLESS CHIP SHOP is called Harry Stannington. The shop is just a franchise and the real Dave is more of a marketing proposition than a real person. Harry Stannington is a pathetic lying police informant who’s going to get his head kicked in and his tongue cut out, at least if you believe the graffitti which someone has sprayed outside the shop.”

As we find out in the next paragraph, Lisa, the new girl at the chip shop and the story’s heroine, is required to work topless. Her workplace is a brilliant invention for an era of dying high streets and vampiric capitalism, and in the hands of a writer like George Saunders its implications would be explored for their potential for pathos. Etchells, though, doesn’t hang around: it seems he took Bernadette Mayer’s instruction ‘Write a novel in twelve short paragraphs’ seriously, and by radically condensing a novel’s worth of plot he highlights how narrative in realist fiction is often ‘just a flimsy excuse put together to justify a procession of different sentimental conversations’ (as the film watched by Harry and Lisa on their first date is described).

The graffiti about Harry is an example of the many metafictional nudges and winks Etchells employs to gesture towards the artificiality and arbitrariness of narrative — characters and the violent acts they suffer, he suggests, are just words, and it’s our own fault if we choose to believe them. The apparent depthlessness of character is convincing here, though, combining with the story’s brevity and the prose’s sense of flippancy to evoke the cruel, quick lives of people deemed ‘disposable’ in dangerous places. There is no time for sentimentality in Lisa’s life: her sister is murdered, she breaks up with Harry and is sacked from the chip shop, her room is burgled, flooded and burnt, and she falls out with her mum.

Then, as divine punishment for avenging her sister, she is given the worst fate a human can endure in a society driven by spectacle: she is ignored by everyone, including animals, CCTV cameras, and automatic doors.

Lisa’s story is affecting because, despite the appearance of depthlessness, the reader is given insight into her desires: after playing her sister in the television reconstruction of her murder she decides she likes acting but is ‘typecast as the dead girl’s sister’, and later she dreams of winning Eurovision. She longs for people to notice her, but ends the story changing her name to ‘SILENCE’.

‘About Lisa’ is also indicative of the collection in that many of the stories involve female suffering: Kelly shoots up a drug that ‘breaks the past into thousands of pieces’ and falls for thirteen years ‘through a hole in the welfare system safety net’, Maxine loses faith in the free market, religion and patriarchy ‘but not necessarily in that order’ and ends up ‘down on her luck and on her knees’, while both Mariam and Carmen have their flats repossessed and are sent to jail. In the latter story, Etchells writes:

“Because fucked up. And pushing fifty. And classical class system and stunt your desire and don’t you know, don’t you know don’t you know, stealing grave tributes to build a weird shrine in the house. Because of an equation between boys with motorbikes. Because girls are defined in the first place by a lack.”

Arguably, passages like this suggest that Etchells wants us to view these stories as a commentary on how the burden of Tory austerity has fallen disproportionately on women, thereby deflecting any charge of misogyny of the kind that has been levelled at Lars Von Trier’s obsessive focus on female suffering. This isn’t always convincing. In ‘Chaikin/Twins’, a Sadean tale in which a man buys two ‘real virgins ©’ and subjects one to ‘every kind of sexual act, perversion, demand’ while the other is ‘bathed in Diet Lilt’, Etchells utilises an afterword which states ‘it is not an intention here to cater to the prurient and voyeuristic needs of that class of reader’ to imply that the story is a critique of voyeuristic pleasure, but the irony feels insufficient when set against passages detailing the girl, Elizabeth, being ‘sodomized, whipped, prostituted, made to crawl naked on her belly through the house’ etc. You might make a moral objection or you might not; the flimsiness of characterisation and the female characters’ lack of agency often means it’s simply impossible to care about the unremitting bleakness of their lives.

Stretched across an almost four-hundred page collection, the grimness of life in Endland can be exhausting for the reader, but it does effectively evoke the stagnant malaise of forty years of neoliberalism (telling it ‘like it was & is’, as Jarvis Cocker writes in his introduction).

While the graffitti changes from slogans like ‘FREE KEN LIVINGSTON’ in the earlier stories to ‘FUCK BREXIT’ in the later stories, and gods’ names change from words like ‘Scalextric’ and ‘Mr Twinkle’ to ‘Stormzy’ and ‘Aldi’, the tonal similarity of the stories suggests nothing has changed in Endland, or in England, where Thatcherite neoliberalism still dominates.

Surprise can be found, though, in Etchells’ playfulness (particularly with names of products: ‘Cadbury’s Chocolate Nooses © ’, a toy called ‘MY LITTLE VOID’ etc.) and his mad, rapid prose that juxtaposes violence with lists of British celebrities. Etchells has fun, too, with the gods. In ‘About Lisa’ and other stories, the figures represent the political and economic forces that can dramatically alter precarious lives in Tory Britain, but elsewhere they behave like the gods of Greek mythology — falling in love with mortals, making decisions led by their own vices, and having as little control over events as anyone else, and they provide the stories with unpredictability.

At one point, the gods wonder if it is ‘humanity itself or only capital that was to blame’ for unhappiness and decide the solution is to put on an ‘impromptu free concert at Glasto in the toxic rain’, playing Bowie and George Michael songs. As such, Endland works best as a collection to dip in and out of, encountering jokes, arresting images and bold experimentation, rather than one to read as a whole.

Find out more about Endlands on the And Other Stories website.