With a colourful, cheerful front cover, somewhat at odds with its ominous, dark-sounding title, Lovers’ Lies is a varied and multi-faceted anthology from Arachne Press. The lies – or stories – have all been contributed by members of the Liars’ League monthly events held in London (with franchises in Leeds, New York and Hong Kong), where the stories are read aloud by actors. Those appearing in Lovers’ Lies are united by the theme of love, and have been selected from five years of events. 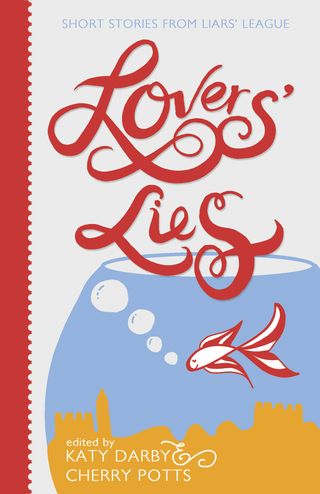 As you’d expect from asking a collection of writers to respond to such a wide-ranging theme, there’s a wealth of variety here. No two stories are quite the same, nor do they even seem to have much in common, except that someone feels love at some point. But the differences are actually an advantage, and as a result the anthology isn’t slavishly devoted to its theme; it has the freedom to take off on tangents and flights of fancy. Love is treated as a springboard rather than an anchor to hold the anthology in place.

The Lovers’ Lies are often short and snappy stories, quick to read but leaving a lasting, heartfelt impression. They deal perhaps with an obvious and common theme (”not another love story!” I hear you cry), but each story has a different take and few of them handle their theme in an obvious way.

Alright, so there’s some fairly standard boy-meets-girl stuff, for example Michael McLoughlin’s ‘The Sacred Duty of Mexican Mothers’ – which livens things up by having the boy almost more interested in seducing the girl’s mother, half an eye on persuading her to let him have a second date and more. That’s not to say that the sultry Mexican air doesn’t throb with some hormonal, teenage desire, but McLoughlin raises the bar with his boy who is ‘at least two steps ahead of any mother in Mexico’.

Alongside all that, though, there’s some thwarted desire – in ‘Takeaway’ by Alison Willis – some girl-meets-girl stories – like ‘Taking Flight’ by Catherine Sharpe and Jessica Lott’s ‘Dara’ – as well as doses of loneliness – in Mi L Holliday’s ‘Surf and Turf’ – and plenty of heartbreak – for example, in Clare Sandling’s ‘Under the Influence’ and ‘Monsieur Fromage’ by Rosalind Stopps. As the title may imply, that last one features a man selling cheeses, but it still manages to be a touching story of a marriage inevitably collapsing inwards despite the desperate desire to stay together.

In amongst the heartbreak, though, there’s some room for humour. Rosalind Stopps, with her other entry, supplies some of this in ‘How to Survive The Olympics With a Broken Heart’, providing its story through a series of tips specific to one particular break-up. It also captures some of the cynicism surrounding the London Olympics before they actually started and national euphoria kicked in. Meanwhile, there’s a certain dark humour in possibly the kinkiest story here, ‘By the Horns’, with its tragic Spanish matador role-play, courtesy of Darren Lee.

Lovers’ Lies, as a collection of love stories, doesn’t neglect the realm of high romance either. Co-editor Cherry Potts provides a story with overtones of Tennyson and epic loves played out across a lifetime in the surprisingly small and closed world of neighbouring farming estates. ‘Mirror’ takes place with the First World War in the distance, but able to act only as a sideshow to the real conflicts and dramas playing out in rural England and in the hearts of two men.

Not all of the types of love involved in Lovers’ Lies are passionate, romantic affairs, and it’s more true and balanced for that. So we’ve got the slow-burner love that’s more comfort than passion in ‘Mrs Murdoch and Mr Smith’ by Peter Higgins, or the decades-old love that overcomes impending death in Nathan Good’s ‘Games I’ve Played and the People I’ve Played Them With’. Then there’s the almost magic-realism of ‘Skin Deep’ (Michelle Shine, featuring a mermaid) or ‘This Isn’t Heat’ (Richard Smyth, featuring a Buddha statue playing Cupid in sweltering Manhattan), and the tolerance built up over years together in Rob Cox’s ‘Things’.

Rebecca Gould’s ‘Speaking in Tongues’ makes a good stab at capturing the changeable nature of love and the way a relationship can be seen so differently from different angles. In a rich, concentrated little story she touches on the divides between East and West and between men and women, but her protagonist is doing more than learning about the new culture she finds herself in; she’s learning about the man she loves and about love itself. More than that, she’s learning about truth and lies and the gap between translation, which isn’t quite either.

The final, redemptive twist of Jason Jackson’s ‘A Time and Place Unknown’, the last, sci-fi, entry in Lovers’ Lies, leaves the anthology with a final note of optimism. It ends by letting us believe that love is a force for good and that it can overcome time, space and perhaps even death itself. Over the course of its 138 pages Lovers’ Lies shows both the darker side of love and the way it brings out the best in us. If that was the intention of the Arachne Press editors, then they’ve done a fine job.