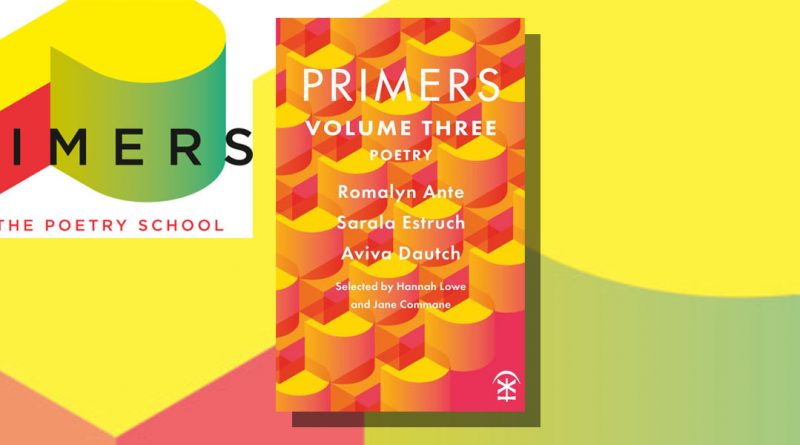 Primers is the brainchild of a mentoring and publishing scheme devised by the Poetry School and Nine Arches Press. Romalyn Ante, Aviva Dautch and Sarala Estruch were the poets of choice this year. Judging, editing and mentoring poets in a six month intensive period is no small order. The commonality of theme and arc concerns exile from home, exile from one’s own mother, exile from marrying into another culture. This forces a question. Do readers remember Solzhenitsyn, Li Bai, Dante or Brecht because they were all exiled or does the work transcend the biography?

Romalyn Ante’s poem ‘Half-Empty’ with its epitaph from Prince Philip’s often quoted ‘The Philippines must be half-empty, you’re all here running the NHS’ gives the title to a poem that is an answering discourse. It takes the form of a medical prescription form, that instead of stanzas has ‘Indications.. Contraindications.. Cautions..and Side effects’ as the markers between units of sense. There are some poignant lines, the verse ‘Cautions’

– your husband may look for another lover while you’re gone

Ultimately, it does not deliver the searing satire one would expect from its chosen title.

Ante’s nursing background is evident in many of her title choices: ‘Anosmia’ (loss of smell), ‘The Importance of Surgeons’, ‘Self-Portrait as Medicines’, and of which only ‘Anitemetic for Homesickness’ rivets:

A day will come when you won’t miss
the country na nagluwal sayo..

The highlighted text translates as ‘that brought you up’. It is in this poem where both languages are placed side by side in the second line that Ante comes to a reckoning that accrues an identity forged from her wounds and the wounds of the patients she tends in ‘the rain of Wolverhampton’.

A kababayan is a fellow Filipino, that when applied to overseas Filipinos refers to those who live in the Philippines, but are overseas temporarily, even for years. Balikbayan refers exclusively to overseas Filipinos. Therein lies the rub, because in the exquisitely wrought imagery of her homeplace, with its kangkongs, kamotes and kamagongs, Ante has never really left. In ‘The Making of Smuggler’, after Zilka Joseph’s poem ‘The Rice Fields’, she transforms the objects of the emigré into the food, landscapes and sealife of her birthplace:

We dig bright orange crabs/out of white sands and use them as tabs/ to zip our bags.

Written in couplets that address the discriminatory ‘No sauce?/No chicken feet?’ of the immigration officers with the power of imagination and the abiding memory of killing her rooster. When she hits the mark, Ante delivers a sucker punch to the snide, small mind. Brilliant.

Aviva Dautch raises the bar. Her chosen doors of departure are the hoards her deceased mother ‘buried herself past saving’ in her opening prose poem ‘The House.’ Dautch uses form to help her make sense of her mother’s hoarding. This mother daughter relationship is further complicated by the weight and debris of history, specifically a Jewish family history, of which the poet’s mother attempts to understand through the lens of science, specifically the study of D.N.A.

In her reverso ‘DNA’ she uses this form to ask the question:

Was I just your first quantifiable experiment? Motherhood,
our double helix of heredity

Reversing lines from the first half of the poem in its second half, the closing lines take on a different meaning. Appearing to offer a sliver of hope, thin as the teaspooons of serum and plasma, that she is more than a quantifiable experiment. That Dautch’s mother is so interested in genetics makes for arresting reading, considering the weight of the experiments in the same carried out in The Holocaust. I love her clear and unflinching eye, particularly in her ‘Ghazal’, written after Aghir Shahid Ali, whose poetry reflects his Hindu, Muslim, and Western heritages. This ghazal acknowledges the past pains of the Hebrew nation and the pain inflicted in the name of Hebrew.

In the wilderness Jews yearned for a home-

There is a multiplicity of homes in Dautch’s poems, not least of which, are the various homes for languages. In ‘Mamaloshen’
(Mother-Tongue) home is ‘how words travel between/ countries like kinder..’ The ghosts of what may or may not be the dead of the past are hinted at in the prose poem ‘What She Kept’

Never-been-worn cardigans and dresses hanging from doorframes and banisters, laid out
like people on each of the beds.

In Sarala Estruch’s poems those narratives are cross-cultural ones, primarily a forbidden marriage between her Sikh father and her Spanish-Italian-Algerian-French mother, and that is compellingly retold in ‘Dreaming of Love in Uttar Pradesh’. The lines

and the faraway look

his family wear whenever she enters a room
as though they were already watching her leave.

show how animal-like the tribe is when something different encroaches on their territories. The poem ‘They Came for Us in the Night’ dedicated to the interracial couple Mildred and Richard Loving is an interesting historic parallel to her own familial history, although in Estruch’s parents case it was her grandmother and not the state who forbade the union. In ‘To the Wounded Among Us’, written after Ada Limon, she describes her own relationships as another type of colonisation, as a place where ears reverberate with gunshot and where her lover’s back is a barricade. So it is with relief that her closing verse allows an examination of how languages can hide so much of what they are trying to reveal:

The way love can translate

an argument ( I hate you, I’m leaving)

into the clamour of blood pouring through veins

screaming I love you. I’m hurting. Hold me.

A poet whose beauty lies in her beguiling belief in love. Unusual in our time.

All three poets have one foot in their collective past, and another in their amalgamated futures, but unlike Peig Sayers, the Irish seanchaí, it remains to be seen which foot is in the grave. All three attempt to tell their stories of exile by telling the stories of two nations, and that in itself, gives space for dialogue. All three will have an avid reader in this reviewer when their full collections are published. Hannah Lowe was the selecting editor, and Jane Commane gave editorial support. All three have been served well. Do not buy this book if you wish to have your prejudices confirmed, discriminatory acts applauded or indeed if you tend to use all as a determiner when referring to minorities. It will send you running to one of those self-same minorities in the NHS for some type of anti-emetic.

The Knowledge by Robert Peake

April 8, 2015 Becky Varley-Winter Comments Off on The Knowledge by Robert Peake