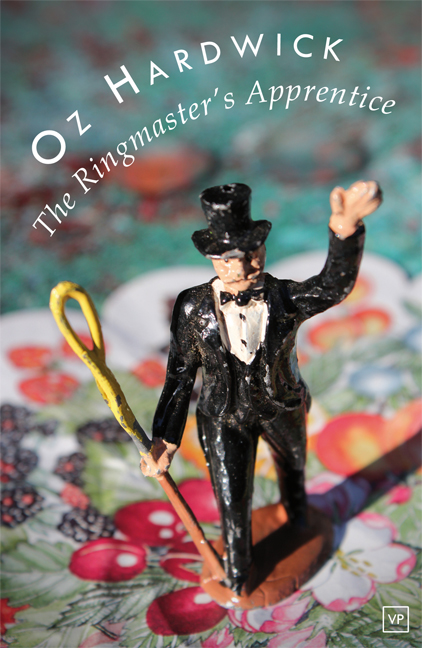 In August we inaugurated our first Tripadvisor-style review with a six-handed review of John Clegg’s pamphlet. The form is back with a review of Oz Hardwick’s The Ringmaster’s Apprentice by Claire Trévien.

Oz Hardwick’s The Ringmaster’s Apprentice is an undoubtedly handsome collection. The cover image, taken by the poet, depicts the figurine of a top-hatted fellow holding on to what looks like, at first glance, a gigantic needle, but which is probably meant to be a whip or a staff. He is placed on a colourful tablecloth patterned with fruit. The whole effect is vibrant and exciting making you feel like you’re in for a treat of spectacular and theatrical poems. The book itself is satisfying to hold, almost pocket-sized, and its insides are beautifully typeset.

Living Up to its Statement ****

No promises at the back of the book, just three blurbs from Sarah Salway, Jim Bennett and James Nash from which the words ‘provocative’ and ‘empathetic’ stand out. Over on the publisher’s website we are told that this collection attempts to bridge the gap between the mundane ‘of everyday reality’ and the extraordinary (‘nature, mystery and myth’), using ‘a circus of language, ideas, music and images’. We are also promised that it ‘can be devoured quickly, but will stay with readers for a long time afterwards.’

Hardwick particularly likes putting fictional or legendary/deceased characters into everyday situations, so in that sense he may be said to ‘bridge the gap’. See for instance ‘Elvis Lives Next Door’, in which Hardwick imagines an Elvis in his seventies who drunkenly gets up during karaoke at the pub ‘swivelling his replacement hip / as he hollered “Jailhouse Rock”’. It’s a fun premise, but like many others in the collection exists solely for a thin punch line and so in this respect doesn’t have much staying power.

The language is overall very clear, often conversational, allowing the poems to be ‘devoured rapidly’ but this does not always result in an immediately clear poem. One such poem, ‘Beneath the Bridge’ made me feel like I needed some complimentary notes to understand who the narrator is, who ‘waits beneath the bridge, alone / hungrily anticipating your passage’. Is it the river or road itself, morbidly hoping for a suicide? This is the impression given through its chilly descriptions, though I hope it is not the case:

Without distances there is no need for bridges
passing through space, like loose tongues linking
souls that never touch, except
through the hard language of wood, steel, stone.

Disconnected, my stifled speech
wordlessly proclaims: I will eat you for my supper.

Perhaps this frustration makes this poem a contender for the promise of a poem that ‘will stay with readers for a long time afterwards.’ It’s certainly representative of a particular skill of Hardwick’s: to be accessible on the surface but not necessarily within grasp.

A huge range of subjects are tackled in a small space of time, with Hardwick taking inspiration from various media. In this sense, he can be credited with originality for being arguably one of the few to ever write about Charlie Chaplin as Kid Auto performing in an M25 traffic jam for his eyes alone. Hardwick also has an eye for interesting images, such as the notion of upturned oarless boats bobbing ‘like helpless, legless beetles’ in the poem ‘Armada’; or the closing lines of his title poem in which the apprentice opens

her scarlet mouth as wide as a lion’s,
her tongue a tightrope where promises dance
like careless acrobats falling into fire.

However, in other respects, Hardwick is not very original. The format of his poems is not generally experimental (loose unrhymed stanzas of 2-4 lines in the main). He has a slight propensity for a tidy ending, as with ‘The Ghosts of Liverpool 8’, which is full of vibrant lines:

They ride their bicycles down crowded pavements,
saddlebags stuffed with smuggled words
from Ireland, America, La-la Land,
to trade for songs at late-night lock-ins,
where they crash the party, laugh in italics

but ends with the obvious:

The ghosts of Liverpool 8 are invisible
but their words are everywhere if you know where to look.

and unfavourably brought to mind Helen Mort’s excellent A Pint for the Ghost pamphlet.

Other poems fall short of originality of imagination, such as ‘No Smoke’ which compares fire to a ‘dark heart’ – making me long for Tom Lehrer’s ‘Masochism Tango’.

On the whole though, Hardwick has to be given credit for trying to draw together into one collection such a wide variety of influences – even if one wishes at times that he’d push his images into odder places (as one knows he can), rather than staying satisfied with an original premise.

There is plenty of wry humour in these poems; I can imagine them being a hit at readings. The language is accessible – Hardwick isn’t afraid to be unabashedly sentimental and straightforward as his tribute to Michael Jackson shows:

And I missed the details, and I don’t know
who was right and who was lying,
but I thought about that young boy singing
that simple song, and all the damage
and all the pain that followed. And what I did know
was that I was glad I wasn’t him. And sad
that he never had the chance to be anyone else.

This isn’t always a point in its favour though, with some poems veering into sanctimonious tones, making me wish for murkier subtlety, as in ‘Monument’:

And over our cities, Victorian eyes
brood in senseless stone, proud
and blind to streets they built from blood

where painted girls in sweatshop clothes
trade their bodies for nothing  with men
they don’t understand. We are all free.

41 poems for £7.99 works out at 19p per poem, there is no way one cannot call that a bargain, though it is on the slim side for a collection.

The aforementioned quality of the product and the variety of subjects in the poems within make this some sort of bumper/family-pack of a collection well worth the money.