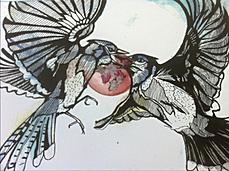 Marc Woodward’s A Fright of Jays begins where many poetry collections might end – at night, with an act of violence, as

A midnight fog lays down the land,
sucks quietly on the ploughed field,
wetly kisses the upturned sod,
whispers from the river mouth
the fetid smell of marsh decay.

It is clear from the off that something is afoot, for despite the kisses and whispers, the implied image is one of deathly waste, foreboding, and to use the poet’s own word, decay.  We suspect the presence of someone or something in the mist obscuring moon and stars (which shine on other worlds tonight), because the description includes observations of the passing of time. At the conclusion of this bleak introductory stanza, the poem’s narrator is finally revealed:

The Earth lies still – except for me,
by the river, waiting for eels.

This isolated figure, though, is not merely waiting – he is hunting the animals and can almost sense them.  What follows is not easy reading for an animal-loving vegetarian like myself, but Woodward’s painstaking details of how

The small bell on the rod end rings,
I strike and take a fat one on –
shiny with slime, a liquid figure of eight

I haul it to the bank, blackest in the blackness,
thrashing fiercely in the torchlight,
as if in tongues before the priest.

The narrator of this prologue-like poem is surely a different man (somehow one instinctively places the eel-catcher, unmoved by the suffering ohis quarry, as male) from the narrator of Revival, who stumbles on a frozen lizard unspotted by crows or rooks, / half hidden in the horse shit round the drain, and compassionately deduces that

…the creature might still be alive,
just stunned to stupor by the late March chill
and if I warmed her through she might survive,
so lifted her and walked on up the hill.

Or is he? One of the strengths of this melancholy suite of twelve poems is its discomfiting picture of people as essentially imprecise, imperfect, damaged goods. Each poem is narrated by an “I” – and some, as in The Bowman’s Lament, appear to be spoken by a changing cast – but the habit of transgression followed by need of redemption suggests something more collective. Is the shady midnight murderer of Eel Catching, who finally, at his back doorstep, reduces his thrashing victim to so much dark blood, like thick red oil, a reflection of wider humanity? The comparison with oil might suggest it, even if Marc Woodward stops short of overt condemnation. The behaviour of the eel catcher is no different to that of thousands of slaughterhouse workers, day in day out – but by setting the scene at the back of a house in the silent, murky midnight, he skilfully presents a dark side of human behaviour through the prism of a single negative action.

We leave the eel for a similar creature, as Woodward bases Snake on the poem of the same name by DH Lawrence. Lawrence’s piece has been read as poetic penance for attacking an animal that was no threat to him, and Woodward’s poem begins

Long dry days
followed the rain.
I sat at the water trough
in my pyjamas
waiting for a snake.
None came.

The pyjamas – clearly purloined from Lawrence – add a naive, child-like, impish feel to a stanza which could also serve as a description of climate change and its effects, an impression made concrete by what follows:

Steady weather
would make my mind
easier in my head.

By the time we have lurched through The Bowman’s Lament – a stunningly worded, surreal confessional about a man who fires an arrow at the moon – we know that this is no ordinary group of poems, that these sad voices are a kind of split personality, or echoes of a human race left bewildered beside a confused sea / swilling on the beaches in uncertainty.  Without wishing to spell out the poem’s plot for those who have not read it, the lament is the central hub of this collection, and frames its tormented narrator in a prison of his own making:

If Man is plunderer, destroyer, he is also artless, and a cog in the wheel of some much wider, epic system or vortex, in which night is a justice of darkness, and

You feel the brief breath of an owl;
the waiting silence of the fox’s cough.

You are forced to become aware that

A hundred rabbits knew your sound
through the earth, long before the air
announced your voice or waved your scent.

This is a world of pregnant silences, shadowy fears and impending violences – but also of unexpected victories and rebellions, such as when the narrator liberates a dog from the tiny yard of a back-to-back – and simple joys, as when “I” strum music to a crowd, with a plectrum so relentlessly fingered through the years by tobacco-rolling hands that it is now the colour of a smoker’s nail.

The last poem, Sing of the Mountain, melds together many of these themes, raising the question yet again of precisely who is telling us, or singing us, their story, weaving a glacial fairytale of impenetrable woods and tangled grapple of the foliage.  This lyrical list of a poem, in which Woodward tells us what to see by first outlining what we must not sing of upon this magic mountain of fallen chestnuts, reminds me of some of the poems of Steve Nash, as the poet dismisses the obvious grandeur of wide-eyed windy views and tumbling scree-strewn slopes, because something more immediate, and far darker, is demanding our attention. The poem contains the word “tangled” twice, adding to the claustrophobia. The collection as a whole contains a double use of “lifeless”, as if to emphasise the foretelling of death which its opening poem implies, notwithstanding the agility which also breathes through this book, like the jays frighted by an unexpected human. Even the revived lizard is held softly in my wooly winter glove, its rescue set against a wintry backdrop. Many of the poems’ images seem like stationary glimpses, or like landscapes seen from a train,

a moment
passing considered, forgotten.
The only trace: a disturbance
in the scent blown down from the wood;
an imprint on the retina
of a cow’s large soft eye, fading.

It is no surprise that rabbits – those shy yet opportunistic, furtive, somewhat secretive creatures – crop up twice in A Fright of Jays: something about their underground lives seems well suited to this dark twilight world of storm-flung slates and troubled dreams. Poems about suicide, liberation, the bizarre destruction of a mobile phone in an apparently pre-meditated, insular revolution against technology, and the impact of humanity on the natural world, are somehow packaged neatly into this short, succinct, high quality chapbook, whose author achieves a level of observational exactitude, empathy, and at times, quite frankly, psychological menace, which many would fail to muster in a full-length collection. 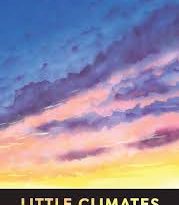