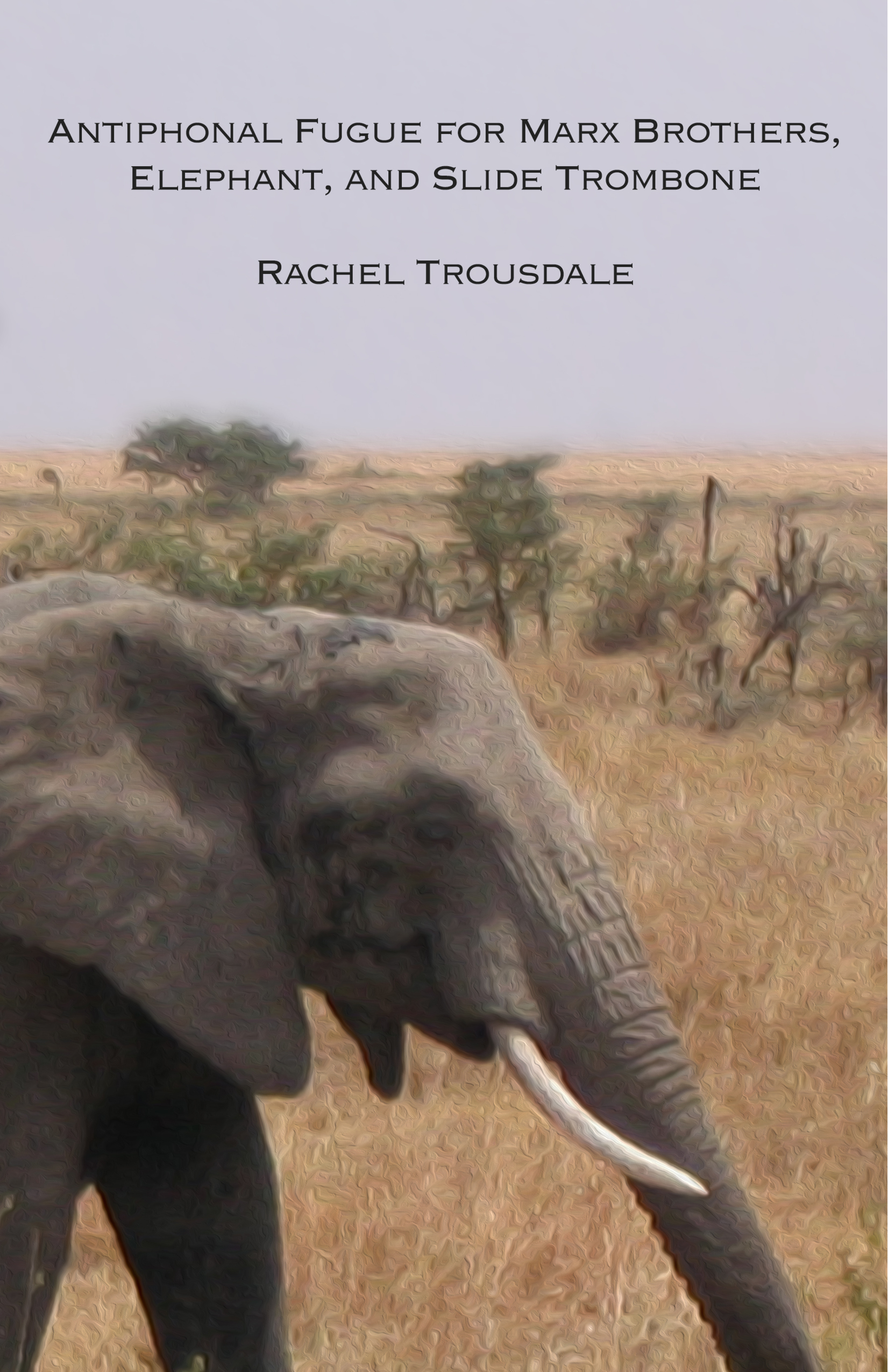 Rachel Trousdale is an assistant professor of English at Framingham State University, the author of Nabokov, Rushdie, and the Transnational Imagination, and working on a project on humour in modern poetry (I’m reminded of Frank Zappa’s album Does Humour Belong in Music). Now she offers us this wonderfully titled pamphlet Antiphonal Fugue For Marx Brothers, Elephant, and Slide Trombone, published by Finishing Line Press.

It opens with the eponymous poem scattered about the page, which the Marx Brothers no doubt would approve of, with brass section woven into the ink. The poem is about those wordplay geniuses, dab hands at slapstick schtick, and interwoven is the word as The Marx Brothers took turns at being Auguste, pantomime, character and tramp clowns:

Trousdale’s love of the Marx Brothers is clearly evident,

Flinging old oranges at the
head of dignity

but at the heart of this poem is the poet’s grandfather and lessons in strength: “This / is what my grandfather / taught me: / greatness / (Paarp!) / can and should be / preposterous / gleefully giddy”. This is a wonderful sentiment, somewhat concealed beneath its mask of Marx.

‘Five Paragraph Essay on the Body-Mind Problem’ is, at first glance, a stream of consciousness poem, yet it’s honed, taut and edited. It’s about the DNA of love. And bananas.

Humans share twenty-five percent of their DNA with bananas. Given two humans, fallen onto the coat-sleeve of a Brobdingnagian, would it be possible to tell us apart? To tell us from bananas? The yellow bananas found in American supermarkets are generally interchangeable.

At times the poem seems uninterested in itself, but pulls itself together through humour and in differential aspects of love tracked through mind and body.

‘The Alien Observer Gets Worried’ is a meditation on mortality. The alien (the poet is alien, an observer, a watcher of the human animal) is apprehensive about the strange behaviour of the subject:

one of the animals placed in its mouth
a pellet of red ochre, chewed, then looked up
and blew onto the interior wall of a cave
a thin red film

I’m drawn to this poem, but want something more out of the poet: the imagery takes it easy, plays it safe. The poem calls for embellishment, euphuistic imagery; it’s as if the poet is gnawing at a bone and can’t quite reach the marrow in the centre.

My favourite poem is ‘Isabel and Jimenez’ in which Trousdale takes a journey to Spain,

A passing bus, a sunshade overhead
to make the passing pleasant
and imagines Isabella I of Castile, haunted, Isabel
and Ferdinand prayed here, before the scene
of the Nativity,

It’s simply written in six sonnets but you can feel the graft behind each word, as in the third sonnet ‘Outside the Confessional’:

Imagine her: she turns to her confessor
and answers chastisement with argument

Isabella had an interesting life, historically speaking. She ordered the forceable conversion of Jewish and Muslim subjects in the Spanish Inquisition. She also financed and supported Columbus’s 1492 voyage, so hers is a heritage of subjugation which Trousdale passes by, as Isabella did, with a few lines:

At issue is the status of the Jews.
But weigh the losses-merchants and advisors
to the crown, their wealth and skill and industry;
or absolution, union, purity?

‘In the Mirror’, sonnet 4 in Isabel and Jimenez, is my personal favourite, in which the poet describes a statue of Isabella:

She saw what we see in a statue of her,
though its six centuries old and made of wood,
and she was flesh and only forty-one:
pink cheeks; dark hair; dark eyes; downcast with thought
instead of modesty, looking past the hands
steepled in prayer

I don’t want to disparage Trousdale’s book, although I had hopes for the content matching the rebelliousness of the title. It’s not a wholly satisfying read, but the merits lift this up on balloons just above average: read it, do.

‘To the Lost’ by Jack Foster