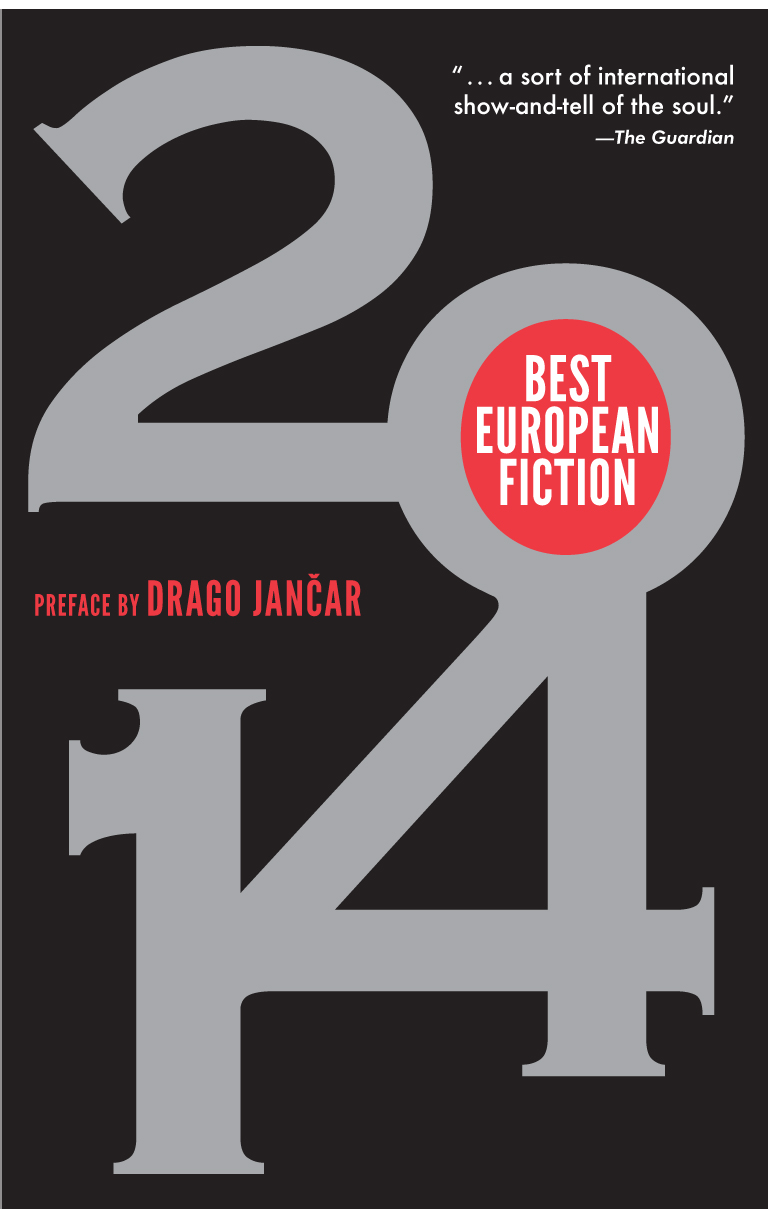 Perhaps the first question raised by the Dalkey Archives Press‘ newest collection, Best European Fiction 2014, is: what is European fiction? What are the characteristics that define it against, say, American fiction? In such a varied continent, ranging from Portugal to Russia, Iceland to Greece, and a continent with so turbulent a history of conflict and competition, can there be a unified literary tradition or identifiable collective identity?

This is the continent of barbarian tribes subdued, for a time, by the Romans and thereafter full of competing kingdoms, principalities and different ethnic groups all struggling for supremacy. Other powers have risen as hegemonies across chunks of Europe (Charlemagne, Hapsburgs, Hohenzollerns, the USSR) but never has this disparate collection of peoples been truly united.

Alongside the competition-driven imperialism of Western Europe, there’s the ethnic diversity and conflict of the continent’s eastern half, caught as it is between the West on one side, then Russia and the Middle East on the other. Places like Ukraine, Moldova, Belarus, the former Yugoslav republics, which have been fought over and divided, rather than dividing and conquering like their more westerly and northern neighbours.

It’s quite ambitious of the Dalkey Archives Press, then, to present a collection of European fiction that can represent these diverse nations and peoples. Is it possible that this anthology can (or should?) represent a continent-wide wave, a movement, of what defines ‘European’ literature and storytelling? 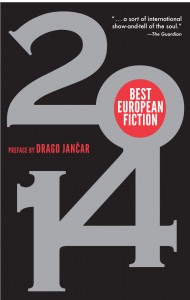 The European Union is just one example of the ideal of European unification, a grand concept of the continent finally living as one, more than the sum of its multifarious parts. But that unity doesn’t yet, it seems, exist in literature, and – argues the anthology’s introduction by Drago Jančar – nor should it. What makes Europe European is its conflict, its diversity, its range of experiences and languages and peoples. The Dalkey Archives Press isn’t giving readers a complete picture of everything European; it’s showing snapshots of bits of European, from which the reader can build up a picture of what some of Europe is like.

It’s a bit like the imaginary elephant in Eric Chevillard’s French story, ‘Hippopotamus’, which is actually quite a good exemplar of Best European Fiction 2014 as a whole. In it, Chevillard’s generic Frenchman (‘his name could be Jules or Alphonse. His name could be Georges-Henri’) is invited to be a writer-in-residence in Mali, a place he has never visited and has no idea about. He becomes very much a tourist, viewing Africa second-hand through imagination and other people’s experiences and stories, much like the reader of this anthology comes to view Europe. These stories are windows on Europe, but they don’t compare to actually living in the continent itself. He half-writes a story of a man who spends fifteen years walking around an elephant in an attempt to see the whole animal – but a complete view eludes him, with more than an echo of the whale in Herman Melville’s Moby Dick (another mammal too vast for the human mind to take in at one view, in a novel that shows something – but not all – of the American psyche). Like the elephant, Europe and its people can only be viewed in snippets, bits at a time.

Of course, Chevillard’s story is about much more than elephants or safari; it’s about the exotic sheen of foreign travel, the glamour attached to people in wealthy countries when they visit poorer ones. In that sense, it’s a story that could only really come from the West. As such, it both complements and contrasts with some of the anthology’s other entries like Emily Tode’s ‘Interpretation’ (Estonia), with an East European living a life in the West full of impossibly large amounts of money and a decadence that would be unthinkable in former Soviet republics. Several stories from the likes of Bosnia & Herzegovina ( Elvis Hadzic’s ‘The Curious Case of Benjamin Zec’) and Croatia (Olja Savicevic Ivancevic’s ‘Adios Cowboy’) show evidence of a shared history that marks those countries – as do stories from Belarus (Vladimir Kozlov’s ‘Politics’), Montenegro (Lena Ruth Stefanovic’s ‘The New Testament’) and Moldova (Ioan Manascurta’s ‘How I was going to die on the Battlefield’) with their own political history and experience – in stories that could come from nowhere else.

But then there are stories like ‘Fear of Ankles’ by Katya Atanasova (Bulgaria) which seem to cross that divide. The fear of ankles in this case is a serious body-image issue that sounds like it comes from a Western, consumerist society with its pressures on teenage girls to conform and match a certain look popularised on the catwalks of Paris, Milan and London.

But it’s not all politics and bloody history. The Russian entry (‘Quiet Feasts’ by Nina Gabrielyan) is some genuinely good sci-fi, featuring a dystopian future (Russia?) where people are terrified of social interaction and the emotional burdens it places on their regulated and rationed psychic energy: a world where someone smiling on public transport is immediately suspect and probably a psychic energy thief. Slovenia’s ‘The Pool’, by Vesna Lemaic, turns a backyard swimming pool into a metaphor for apathy or procrastination, appearing for no readily apparent reason in a man’s garden and drawing in anyone who stops to look at it. It’s an off-kilter though amusing and dark tale of death and danger in suburbia. In some ways, it’s not unlike England’s entry, ‘On Dodgem Jockeys’, in which Tom McCarthy makes a metaphor for life out of the fairground staple dodgem cars. Interestingly, while we’re looking for characteristics that define European literature, McCarthy’s story is perhaps atypical of traditional Anglophone writing in that it has no real narrative, serving instead as an essay (as the title implies) or extended description: it comes across as quite European in its reliance on ideas and concepts over straight narrative.

Another story heavy on concepts over narrative is Jens Dittmar’s ‘His Cryptologists’ ( Lichtenstein), a jumble of philosophical/literary/intellectual points and debates, where the lack of a clear narrative is significant. Should we be surprised (again looking at European traits in the anthology) that this (deliberately?) obscure hodgepodge is a German-language entry? Like Lichtenstein, the central character is at a confluence of ideas and movements, not having any distinct identity (he even borrows his name from a Spaniard) and instead being buffeted by neighbouring intellectual powers. What choice have Europe’s smaller countries ever had?

There’s plenty more to say about this anthology – for example, I haven’t touched on the element of the surreal that features in so many of the stories, or the many stories that are really a series of flash fiction vignettes – but Europe is so varied and complex a place that we shouldn’t be surprised that an anthology of its best fiction is rich and diverse. 2013’s anthology also set a high benchmark by getting nominated for our own Saboteur Awards.

Bringing this European literature to an Anglophone audience (the spelling conventions imply that Best European Fiction 2014 is aimed at Americans) is laudable. It’s good to see that the translators get their own bios alongside the original authors, reflecting an equal importance that can be easily overlooked.

The anthology title sets these stories up as the ‘best’: so are they indicative of a movement, or cherry-picked examples of an editorial opinion? We’ll have to trust the Dalkey Archives Press’ judgement on that one, unless we want to read all of Europe’s recent literature: if the anthology encourages its readers to at least dip their toes in that massive endeavour, and find more works by these and other European writers, then it has achieved some success.

One thought on “Best European Fiction 2014”