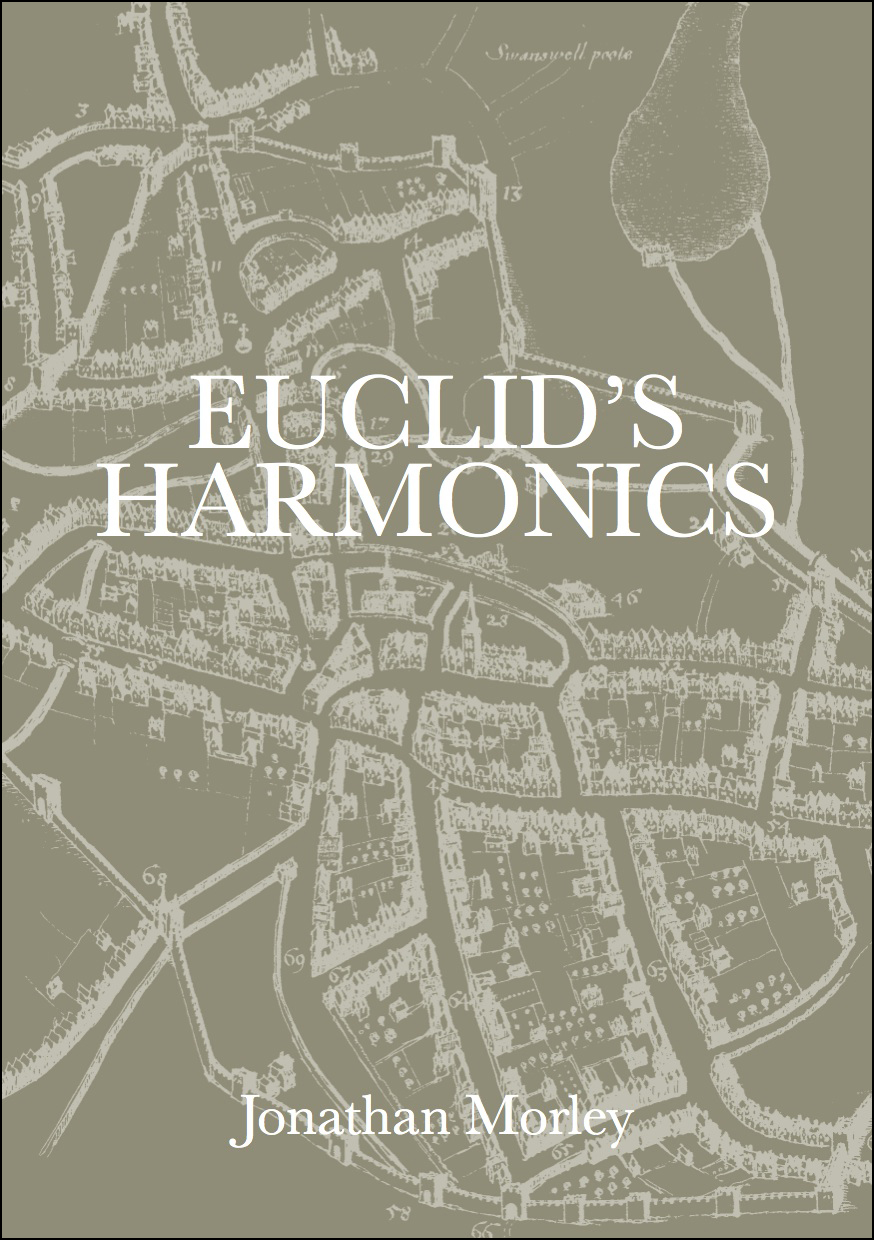 Euclid’s Harmonics is named after a lost text by the translator, physician and educator Philemon Holland. Holland lived and worked in the city of Coventry, which is the central focus of the collection. Jonathan Morley takes time to detail Holland’s approach to translation, at once erudite and, in his own words, “meane and popular”. Morley states he reads this “meane” in the sense of average, suggesting a kind of mathematically rational egalitarianism to be found in a style which is “concise, couched and knit together”. Listening to the play of these two influences, scholastic literary heritage and that of everyday experience, is a fruitful way into the pamphlet, which collapses history and place into each other.

Some of the most visible elements of this approach are pieces of varying lengths that, slightly unsettlingly, take the place where one might expect footnotes to be. At times these operate as one might expect, informing and providing context for the (more normatively located) poems; at others they seem distinct flights of fancy, almost intentionally distracting.

Morley’s poems have a translator’s specificity of detail. A sequence in “Coventry Boys” performs, with almost drive-by momentum, a sweep of local names which become a security for the people who make the city:

Arthur Genders
Builders Merchants
off Clovelly Row
Kev’s Chop Shop
the sky Bleu Batch Bat (the Kurdistan Hand Car Wash)
Moira’s Wet Fish
the city names
the sanctuary
of those who turn the lathes
those that drive the buzzes.

The locale is eroticised (in a blazon/panegyric mashup sonnet—”Maiden in the Map”) and the local is honoured. In the opening poem, “The Silver Age”, a polyphonic tribute to a well-known coventry art teacher which incorporates other poems honouring the same man. The acoustic territory of Coventry streets blends with a sixteenth and seventeenth century lexicon and the Shakespearean forest of Arden. Morley seems to find equivalent delight in putting these less-familiar words amid contemporary poetry, but the combination isn’t simply for effect. “Rahtid!” works as a decolonial folding of the Jacobean world of Philemon Holland with the contemporary world of Jonathan Morley: I trace the the word initially to Jamaica, then as a contraction of “overwroughted” from the King James Bible, exported by missionaries finally to return to a contracted contemporary “Birmin’m”.

I think the old fashioned writing (often in the footpieces) is consciously awkward, creating a friction on the page like “drizzle hissing in yr headphones”. The poems feel like acts of intracultural translation—translating a language into itself again – by granting the “popular” register of contemporary coventry a space amongst the poetic (and printed) language it has always a part of. “A Deaf Yout Inna Russells Bakery”, perhaps one of the most affecting poems, depicts a person’s existence both inside a culture and excluded from its sounds, accessible only through translation (into sign language). There’s alienation, but also the intangibility and fragility of a community’s language and culture. Morley’s poem does not preserve this culture, though he can reference it, evoke it and even mourn its loss, amidst the “ageing sisters” who “swish back/the chain curtain, enumerate your order like a roll-call: / fish tea, stew chicken with food, sexy juice, festival—”.

Philemon Holland declared “have I not Englished every word Aptly?” His work as a translator, and Morley’s poems, are dialogues with the past, bringing forgotten processes back to the present. Morley’s project explores these possibilities with a mature honesty, attempting to recalibrate written English, reaching both backwards and outwards to a poetic language that can speak to present-day Britain.

The Portable Museum (Ox and Pigeon)

December 13, 2012 Editor Comments Off on The Portable Museum (Ox and Pigeon)