Strangers in Paris is an anthology of Anglophone poetry and fiction inspired by the city of lights. The unifying thread varies depending on the writer, from writings where Paris is part of the fabric, to writings set outside of the city but written while in Paris, such as Isabel Harding’s Zombie Mermaid where France gets a passing mention. In contrast, in Rufo Quintavalle’s poem ‘Joined-up writing’, Paris is explored as a form of writing in itself, through the comparison of the constraints of a Parisian park to constraints on the page. While the anthology features big names such as Alice Notley and John Berger, it is in the less well-known names that we find the most refreshing takes on the city.

Paris has a long association with writers, most recently this romantic appeal has been touched upon in Woody Allen’s Midnight in Paris, where an aspiring novelist returns nightly to Hemingway’s époque. The image of the penniless American writer typing in his Parisian attic is a cliché, and yet, like all clichés, it is one that new generations bravely pit themselves against. Paris has in recent years strived to remove dust from that stereotype with a new generation of Anglophone writers. The energy comes from two main centres: Shakespeare & co, where a weekly workshop takes place, and Culture Rapide, where a weekly open mic is hosted. Both Anglophone, both open to strangers wherever they hail from, both led by one of the editors of this anthology: David Barnes. These are writers that are just as penniless as previous generations, just as passionate, just as flammable, and it is their determination to use this city without prejudice or fear of the footsteps they are walking in that makes this anthology, like a manifesto, so refreshing.

What is a stranger? It is of course a foreigner, a newcomer, an alien but also an unknown person with whom one is not acquainted. The word evokes disconnection too, a fracture, as is the case in the late Jessica Malcomson’s short story I’ll neologise you, baby which, while not in any obvious way set in Paris, captures an emotion that must be familiar to any stranger in a foreign town. It is a tale about the struggle to give each intangible thing its proper name and find it slipping out of grasp. Colin Mahar tackles the disengagement by translating Claire Malroux’s translations of Emily Dickinson poems. The results of this two-tiered translation process are less interesting however, than their premise. A more successful portrayal of estrangement occurs in Sion Dayson’s short story The Idiopath, where being a stranger is a self-imposed condition. The protagonist is emotionally stunted, unable to offer comfort whether it is to the epileptic girlfriend he left in the States, or to a suffering stranger on the metro:

‘He looks around at his surroundings, realizing he is a disease unto himself’

In several works, we can see a conscious effort to move away from a romanticized view of Paris. In Eleni Sikelianos’ ‘Untitled’, the café, that old Parisian trope, is rejuvenated. In this prose poem, the café setting encapsulates the slippage of the sense of self that can occur when placed in an unfamiliar setting:

‘I can’t see myself in the glass except when people pass. When people pass they block the light (light plays). I wait for myself to appear.’

It is only through other people that the displaced protagonist remembers who he is. Likewise, in David Barnes’ short story She always reads the last line first, the café is a pivotal location, hinting to the reader future developments as well as showing how the city is echoed here on a smaller scale:

‘The tables are the tiny round ones all Parisian cafés have, just big enough for two people. Paris is a city geared to the I-you relationship’

In Jeffrey Greene’s Cooking Octopus with Madame Esteves, relationships are an integral part of the Parisian experience too. The story is a reminder that Paris is both a city and a village with its gossiping, its spying, the compulsive intertwining of beings. The tale also masterfully exposes the way a foreign city can assault a person, imposing a new tongue and new rules, through such episodes as the French tutor forcing herself upon the protagonist:

‘She led me to her small cell-like bed, suddenly tutoyering me, forcing me to adjust my verbs while I was being undressed’

The loneliness of being a stranger weighs heavily on several of the writings of this anthology, but in Kathleen Spivack’s poem ‘Straining’, self-pity is avoided through the ventriloquing of Rilke. In this, loneliness itself is a stranger, sponging off a body, creating diseased writings:

on his mouth, was sucking,

Beyond the loneliness, the disconnection, this anthology is also a celebration of difference, of the clash between cultures, of the creativity that stems from being in an unknown environment. Perhaps most exemplary of this trend is co-editor Megan Fernandes’ poem ‘Red Umbrellas at La Nuit Blanche’, based on a one-off night-time installation by Noel Dolla on the Buttes Chaumont. Being a stranger here is to be an extraordinary anomaly, creating a temporary experience that lingers in the mind long after it has ceased:

breathy and indifferent from their usual call to action–

for how often do their faceless blooms gaze into a clear sky?’ 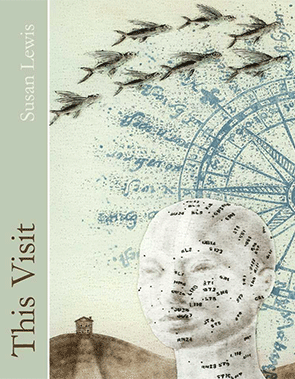 This Visit by Susan Lewis

March 30, 2015 Becky Varley-Winter Comments Off on This Visit by Susan Lewis

‘The Long Woman’ by Charlotte Gann

August 23, 2011 Editor Comments Off on ‘The Long Woman’ by Charlotte Gann

One thought on “Strangers in Paris: New Writing Inspired by the City of Lights”