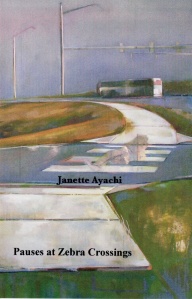 The contents page of Janette Ayachi’s chapbook Pauses at Zebra Crossings reads like a travel journal. Ayachi’s varied cityscapes take us from Manhattan to Bergamo, Newcastle to Nuremburg.  The theme is mostly love and lost love, in series of bedrooms, streets and airports. There’s an underlying feeling of dislocation and a search for permanence.

Ayachi was born in London but moved to Scotland at the age of thirteen, and both Edinburgh and Glasgow feature in the poems.  One of the most striking stories is in ‘Extra Curricular’ where she describes a very early morning after an illicit night in a teacher’s flat overlooking Glasgow Green:

I know that you are tired streetlamps

as I watch you

‘London Child’ is a poignant poem about the childhood Ayachi left behind, with her Algerian father. She remembers ‘dialling Algeria from a fountain pretending it was a phone’. Then there is a series of postcard-like memories of trips with a lover, to Barcelona, Amsterdam, Los Angeles. These are strongly descriptive pen-portraits of each place and often focus on the lonely and unkempt inhabitants of each city as well as the narrator and her lover.

Ayachi is a free-verse poet and does not use rhyme or form to heighten her language.  She relies on strong description and metaphor to make her poetic effects. Some of these are startlingly effective.  In ‘Beneath the Bracken’, an elegiac poem, Ayachi describes a bar which the deceased used to frequent: ‘The fabric of the seats unthreaded to sponge / the same colour your face was near the end’ and in ‘Youma and the Moon’, one of the most successful poems in this set, the last stanza is powerful:

Outside the sea gloriously
chanted the names of all it drowned
it was then for the first time ‘youma’ sounded
only like a murmur and the moon was handed out
in pieces like all of her gold.

I also enjoyed this passage in ‘The Artist’:

opening the envelope would be like staring
into the ruptured vestibule of a sun.

There’s a lot of complex metaphor in this work and many of them feel like they have been stretched to snapping point. In ‘Airports’ we are told that the cabin crew ‘walk their suitcases like small dogs’ which is a lovely, clear image that really tells us something about their demeanour, but it is part of a more elaborate construct:

An army of hostesses hosting high hair
high fashion and high eyebrows
walk their suitcases like small dogs
where every surface is a runway.

In the same poem there is the baffling image: ‘time is suspended, hangs from the beaks / of scavenger birds that drop morsels of time to other places’.  In the title poem of the chapbook we encounter ‘crevices or cavities / of thought, an elevated platform hiatus, a cellular lacuna.’ I am now spatially confused, not knowing which way is up, and unable to construct an image from the words. Ayachi also abhors the lonely noun.  In the same couplet in ‘Our Barcelona Ending’ we find ‘obsidian blue’, ‘glassy moon’ and ‘siren whisper’, forming a predictable pattern of overblown poetic descriptors.  There are also mentions of ‘tellurian’ and ‘amaranthine’ which sent me to the dictionary. What can we make of this apparent non-sequitur?:

Many dreams of prison
as stars halo a tiara of keys
above our rooftops
and a light bulb balances
above each organ.

There are too many chaotic collisions of image in these poems for the reader to deduce much meaning. A more coherent, but equally infelicitous instance is in ‘Landscapes with Still-Life’:

Another issue for me in these poems is their purpose.  Ayachi gives us what seem to be biographical vignettes of cities and lovers, but I am left asking – why is she telling me this?  I keep looking for a deeper meaning that the poet derives from her experiences – something profound or fundamental about life, love and visited places; but apart from a general melancholy, I didn’t find a lot of new insights here.

On the evidence of this chapbook it seems that Ayachi is prone to fatal over-embellishment. I’d like to suggest that she pauses, edits and simplifies her work, ensuring that every word earns its place in her narrative and adds to the clarity of her message.  Poets generally do well to embrace the minimalist dictum ‘Less is More’.