At first glance, the description of Robert Wexelblatt’s Losses on the Vagabondage Press website sounds promising: ‘A single father who is a new IRS agent, his cherished and imaginative little girl, a divorced woman having second thoughts about motherhood, a couple who think two ways about becoming parents, a mysterious and crooked financial wizard – these are the people from whose relationships, enterprises, gains, and losses this story is woven.’ With such a range of characters, one might be forgiven for expecting Losses to use them to provide a healthy dose of domestic-meets-business intrigue, or perhaps some sort of social-cum-corporate satire, in the vein of Max Barry’s novels Jennifer Government and Company. 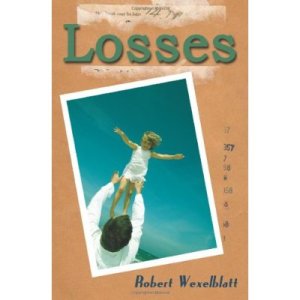 Unfortunately, this is precisely where Losses falls short, as the novella’s length does not really permit a great deal of narrative complexity in order to service so many characters. Two storylines proceeding in parallel move the novella’s action forward, one involving the narrator uncovering a tax scam, the other concerning his relationship with his daughter, Augusta. The two are kept largely separate until the final chapters, when a plot twist reveals that they have been connected all along. However, this attempt to tie all of the characters together, while not exactly predictable, is also not particularly convincing. If anything, it comes off as somewhat anticlimactic, the narrative equivalent of a deus ex machina that the first ten chapters have given no indication of, only for the final three to hurriedly push it to the forefront and retroactively alter the reader’s perspective of the preceding writing.

Hence, by the end of Losses, the characters remain largely reducible to the stereotypical descriptions given on the publisher’s website. This is a shame, given that Wexelblatt’s breezy first-person narration actually makes for lively, highly readable prose. This quality shines through most in the scenes featuring the father-daughter relationship, e.g. in the opening paragraph’s wry description: ‘Like most children, Gus was a first-rate abstract expressionist up ‘til the age of three, whereupon she was made into a fifth-rate realist. Now she likes to create what she calls ‘designs’. Or when following a call from Augusta’s mother, announcing her intention to sue for custody of her daughter, Augusta tells the narrator, “Oh Daddy! The way I see it, you need me more than I need Mommy. […] But what’s all this stuff about needing? Faker [i.e. Augusta’s imaginary friend] says that grown-ups say you need when they really mean I want.”

Ultimately, although Wexelblatt’s writing style does make Losses an entertaining read while it lasts, I still found myself wishing that both plot and characters had been given more room to breathe. Then the two halves of the narrator’s life, the domestic and the business, and the storylines tied to them, would likely have felt more organically connected within the wider narrative, instead of seeming as if they had to be shoehorned to fit together. If this all sounds like nitpicking, it is only because I think the material Wexelblatt is working with in Losses contains unexplored potential, and more importantly, what writing there is here actually suggests that he ought to be up to the task.

In Conversation with Robert James Russell

One thought on “‘Losses’ by Robert Wexelblatt”