‘The writing of some
men
is like a vast bridge
that carries you
over
the many things
that claw and tear.’

That’s Charles Bukowski, from the collection Love is a dog from hell. I was led to re-read some of his poems by ‘sex is a bitch from heaven’, the penultimate poem in this collection by Tiffany Anne Tondut. For me, those few lines sum up a lot of the reasons to read, or write (or indeed to review).

Tondut also references Bukowski in ‘floodlights’, the second poem in the collection, where she locates him in the second line:

Two Bukowski-inspired poems out of a collection of only eleven; pretty much bracketing the work so that we can’t miss the influence. Tondut emulates the poet’s style too, writing almost exclusively in lower-case, and she uses slashes and apostrophes to miss out letters.

Bukowski has a fairly bleak view of the human condition, but he seems basically at ease with himself and fairly tongue-in-cheek about his travails. In ‘Love is a dog from hell’ he remembers past lovers by the condoms he wore with them:

the walls of my bedroom are blue

(and Nina went to England)’

Tondut uses an almost identical structure in ‘sex is a bitch from heaven’, but in contrast to Bukowski, the characters in Tondut’s poems are all quite damaged women, and their experience of life, and sex, is intense and gut-wrenchingly honest. The narrator of this one has a number of men on the go. We learn this from the contents of her bedside waste bin, which:

the walls of my bedroom are venus white

The narrator is obsessed by colour. Alex’s semen is the light grey colour of gun smoke, Ollie’s almost white, while she tells us later that her own eyes are ‘hunter green’, the colour of the wellington boots.

Her bedroom may be white, but there’s a darkness at the centre of this woman:

These lines too are adapted from Bukowski’s poem –

Tondut does the same thing in ‘floodlights’, taking another Bukowski poem and incorporating a lot of the imagery and tropes into her own work. It’s not pastiche, nor really homage, so why is she doing it so obviously?

In ‘w’althamstow heights’ she uses apostrophes in place of missing letters, giving the reader a sense of the narrator’s pronunciation, and thus where she fits into the British class structure. She has been killed in the last line of the poem, (‘a’ thought, ‘e cannot kill me. bu’ ‘e did.’) so there is a second possibility – this may be a buried corpse or a ghost speaking to us, with difficult diction. A lot of Tondut’s imagery offers multiple possible readings, of which more later.

The collection is named after the poem ‘the god of love is stained’, and this piece brings low self-worth right into the foreground. It’s a monologue, preceded by a short scene-setting: ‘zelda (early 30s) is a writer living in london. she’s joined a support group for vulnerable women. in her introductory speech, she attempts to explain her reasons for attending.’  Zelda launches into a rambling tale of failed relationships:

but she’s been emailed a photograph of a William Morris stained glass window of  ‘the God of Love’. The window is stained and cracked, and she thinks that it’s symbolic of how her god of love is stained. Then she notices that the window has a girl standing next to the god:

‘but he’s never going to return her gaze, is he?  no matter how long she stares. but she still exists, and that’s when it hit me, how like her i am. always looking for the god of love, never once looking for me.’

As confessionals go, that’s pretty intense, and it’s difficult to know whether these characters are articulating the poet’s own feelings or whether she’s constructed them, like a novelist, to show us some of society’s losers. I find myself wondering if the Bukowski references are meant to give the collection some cultural prestige that the author fears it might otherwise lack.

And yet she has no need to worry – these poems have a vigour and a power that is uncommon. Her subjects are only too believable – I’ve spent a long time thinking about the narrator of ‘sex is a bitch from heaven’, looking at different layers of meaning, and the same goes for other examples in this collection.

Her use of vocabulary is subtle and multi-layered – remember the ‘durex (extra safe) supposedly numbing sensitivity’.  In ‘wanted’ she puts us into the mind of a woman who fights boredom by fantasising:

See how she uses crime-related vocabulary – ‘dead’ days, a fur ‘stole’. Other words would suffice, but these choices keep us focussed on gangsters.  Very sexual imagery, too, the words working on several levels:

‘working a stick
of red against
my lips ‘

‘my long
legs matchin the
swing of his gun’

These poems are unsettling, grammatically and emotionally, but they have a power and a rawness that makes them hard to forget. The rhythm of the lines made me read some of them out loud, pounding out the words.

The God of Love is Stained is not easy to read but it’s powerful and hard to forget. Tondut gives us a lot of Bukowski’s ‘things that claw and tear’, but it’s her own vision, and her own voice, with her own remarkable use of language. Try it. 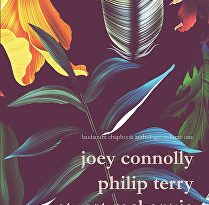