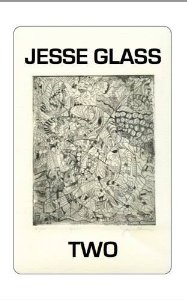 As someone unfamiliar with L=A=N=G=U=A=G=E poetry, the publisher’s description of Two as ‘a two-part L=A=N=G=U=A=G=E excavation of the rhetoric of history’ gave me little in the way of direction as a reader. Two, as the name suggests, consists of two long poems. The first is titled ‘Poetic Fictions: A New Age Dawns At Longshoreman’s Hall, San Francisco, June 11, 1964!’, which the back cover informs me is a reference to the book On Bread & Poetry: A Panel Discussion With Gary Snyder, Lew Welch & Philip Whalen (Grey Fox Press, 1977). Once again, this is less illuminating than might be expected, unless you are already familiar with that book, or at least with the work of Snyder, Welch and Whalen.

Having said that, there is still something compelling about the experience of reading ‘Poetic Fictions’, questions of comprehension aside. At first, I tried working out whether each of the four characters (the three poets plus panel moderator, Jack Nessel) had distinct personalities or ways of speaking in the poem, but I quickly gave up because it felt, at least to me, beside the point. If Glass is ‘deconstruct[ing] the post-modern fable’ of that 1964 reading, ‘to reveal arcane power structures’, I assume this will become clearer to me once I have acquired the requisite contextual knowledge, as mentioned above. For the time being though, I am happy to take the occasional flashes of interesting language and imagery:

‘Walk out of your skin’s
Gypsum embrace
If you gotta mambo.

On the other hand, ‘The Hero I Evoke’, the second long poem, feels much more accessible, despite playing similar typographical games. It is clear that this is primarily a function of its underlying subject matter. According to the back cover, ‘The Hero I Evoke’ is a ‘re-working of the Gilgamesh story as told in the light of America’s Iraq interventions and the current world economic fizzle’. A good deal of punning is involved, as demonstrated in a line like ‘GodblessusMall will save us hard-earned tax dollarz’:

of everything in an Awk

we crawled in among

the shadows of this

At the end of the day, Glass’s Two is one of those works that needs to be read in order to appreciate what the poet is doing, in the sense that its linguistic complexity resists reduction to a few paragraphs in a review. Although I found it difficult, even frustrating at times, to work out what Glass was saying in Two, there is value, I think, in being forced to confront and engage with poetry that lies outside one’s comfort zone. Two certainly proved to be a challenge to me as a reader and a reviewer. However, I also came away from it feeling excited that here was someone working with language as a material in ways that would never have occurred to me. For that, The Knives Forks and Spoons Press should be commended for publishing work like Glass’s.

One thought on “‘Two’ by Jesse Glass”