The backcover blurb for Stations states that that the anthology contains “[A] story for every station on the Overground line in East and South London […]”. There are twenty-four in all and the first point to be made about this collection is to note an absence – of a route map. For readers not living in London or familiar with the Overground Line, a visual aid as to how these stations (and stories) link together would have been very useful and might have provided a sense of cohesiveness to the collection as a whole.

Similarly, the inclusion of a brief biography of each author would have been welcome. I like to read more about the authors contained in an anthology, particularly if I’m struck by a certain story. It’s a personal preference, but one usually met in other anthologies. 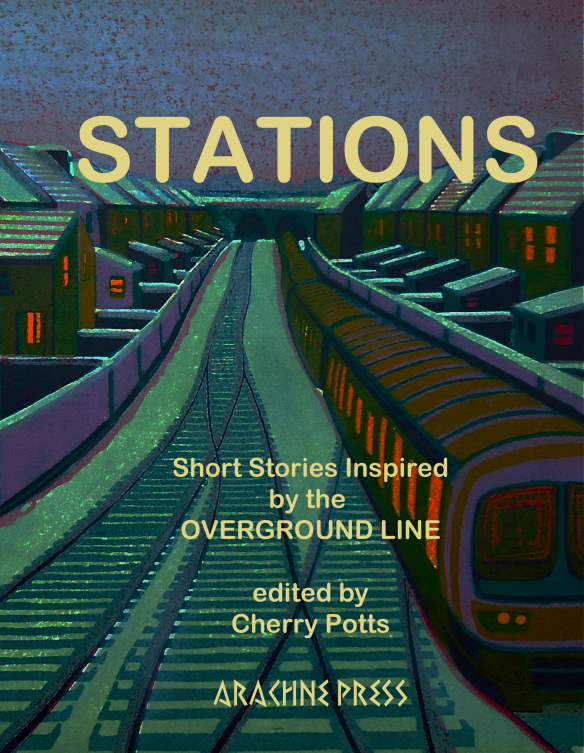 The stories themselves vary in quality though are of similar length – around seven pages, some shorter, some longer; possibly the perfect length for a journey between stations. Caroline Hardman’s ‘Bloody Marys and a bowl of Pho’ (Hoxton) is a modern-day, urban take on the vampire narratives so current at the moment. It is well-written and funny. ‘Platform Zero’ (Haggerston) by Michael Trimmer also offers a quirky version of another, familiar theme – that of the parallel universe. ‘The Beetle’ by Ellie Stewart (Wapping) is also well-paced and moving in its portrayal of a broken relationship. Peter Morgan’s ‘Mr Forest Hill Station’ (Forest Hill) also stands out due to its tender depiction of the bond between strangers, meeting occasionally in the big city.

A common theme the stories share is the sense of locale; all stories give a real sense of London’s enclaves, those small areas threaded together by transport links. In some stories the topography is described in minute detail: ‘ ‘Left out of the station entrance,’ she had said, ‘not far until a sort-of-small-road-kind-of-more-like-an-alley which you need to go down all the way, then through the gap-between-the-shops to cross the big street, then to the right for a bit until you get to a shop with a kind-of-old-fashioned-green-sign and some little writing in the window […].’ (‘Three Things to Do in Surrey Quays’, Adrian Gantlope). It is enlightening to the non-London resident to think of London in such small terms, as described above.

Many stories also focus upon the fragility and fleetingness of relationships. For example, Rob Walton describes an odd kind of love affair in ‘Yellow Tulips’ (New Cross Gate), between the narrator, and John and Alex. The affair itself seems unsatisfactory and temporary, based on hurried meetings. Walton is effective at capturing the instability of the relationship: ‘It is possible to live in a city, a town, a village, an area of a city for a short time and make new friends, close friends, have altogether deeper relationships. Without the shared past or common references you can dive into the here and now, establish a new sort of relationship, one you haven’t tried before. Do all the things you didn’t do in the other places you lived. Then move on and become a new you, or be one of the other yous [sic] in another new place.’

The difficulty in describing these kind of brief, random relationships, in short stories only a few pages long, is that the reader does not have long to inhabit the characters, to really get inside their skins and empathise with them as a friendship or love affairs shatter or flare into view. The writing has to be crisp, the author at the top of their game for a story so short and with such subject matter to resonate. Stories like ‘Yellow Tulips’ and ‘Mr Forest Hill Station’ achieve this, with their touching portrayal of how fragmented, passing moments can leave a lasting impression. In other stories where this is not achieved, the reader consumes them easily and moves on.

Perhaps this was the ambition of the editors: to meet the need of a busy commuter, seeking entertainment on their voyage in and out of the heart of the metropolis. To readers outside of London, some stories stand better than others, lingering past the journey’s end.