Bartleby Snopes, already named by Flavorwire as one of the 10 online literary magazines everyone should be reading, is now branching into publishing flash novels. This also comes after the magazine launched Saboteur Award-nominated Post-Experimentalism, a special project billed as ‘the world’s first issue of Post-Experimental fiction’. With this new flash novel series, Bartleby Snopes Press looks set to continue breaking down genre boundaries. To get an idea of what to expect, here are the guidelines from the website: ‘Make us feel like we’ve read a whole novel (but in about a tenth the time). […] We view the flash novel as more than just a longer story. Don’t think of it as a collection of flash stories that make up a novel. We want the depth of a novel in under 10,000 words.’

True to that description, Matthew Ankeny’s The Rink clocks in at around 2500 words, but spans the lifetime of its protagonist, Kay, in six sections bookended by descriptions of the titular ice skating rink. It opens in late fall, and before the reader is even introduced to Kay, Ankeny begins with the image of the many skaters in the rink moving in concert, circling counterclockwise. Only then does he home in on Kay and her friends, just another group coming into view. Within the wider flash novel, the effect is to highlight that what the reader gets is a story that is uniquely Kay’s, but which could also just as easily have been that of any of the other skaters in the rink at that moment. 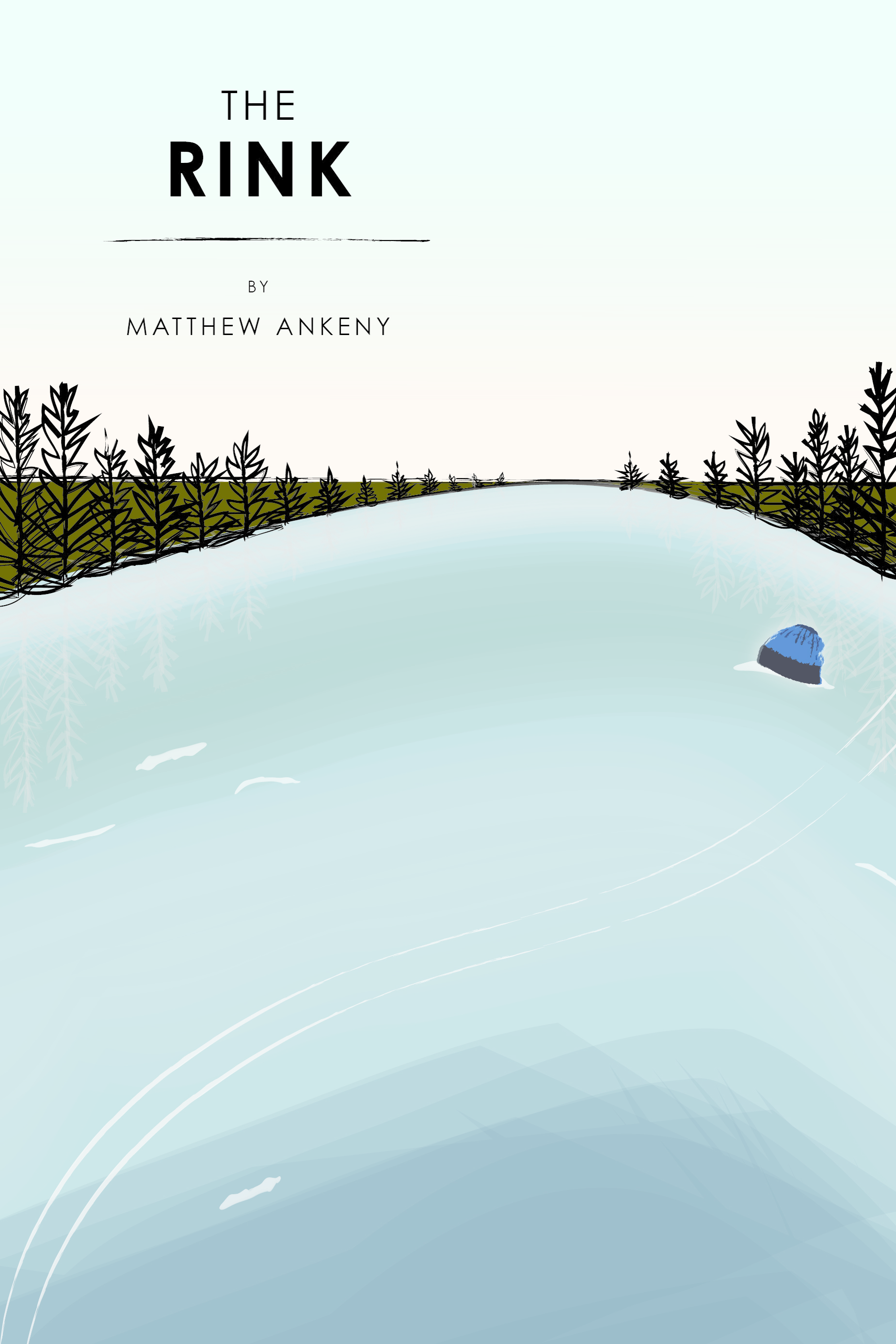 This section also introduces the metaphor of the rink as the arena in which lives play out and leave their literal and metaphorical marks. The girls attempt to skate as slowly as possible, so they ‘push off and begin with small pats of the skates, light scrapes against the ice, hooves tapping the surface of a frozen tundra, children testing the water’. The hint of romantic intrigue offered up by the characters of Sandi and Rob in this section is also paralleled and developed in the next, where Kay and Kent’s date ends in a re-enactment of younger Kay and the other girls skating hand in hand in one line. Except this is a calculated move by Kay (‘She could hold him; she could support his fall. But she doesn’t.’) to create an opportunity for the couple to fall down in a tangled ‘heap of legs, arms, torsos, hips, skates’.

From here, The Rink alights at subsequent points in Kay’s life, skipping marriage and heading straight to when her daughter Jolie is six and going ice skating for the first time at the same rink, then jumping forward to Kay and Kent’s separation. In this fourth section, Ankeny returns to the image of the crowd at the rink and the solace it offers to Kay: ‘There’s peace in moving through crowds. It’s a community of silence; it’s kinesthetic speech, spatial connection, the flow of bodies through space. She felt closeness as she whirled herself around, edging through and behind and beside.’

As Kay’s story starts to draw to a close, the reader is offered a glimpse at Jolie’s fourteenth birthday, which also takes place at the rink. In keeping with how Ankeny echoes images throughout The Rink, Jolie is also ice skating with her friends, while Sandi and Rob make their reappearance. When the birthday cake is passed around, Kay is described as ‘passing them out like memories to those with an appetite’, a salient reminder of how the rink serves to tie Kay’s past and present together. To bring things full circle, the final section dealing with Kay’s life story thus begins, ‘The women held hands like they once did.’ Yet it also underscores how time has changed and marked them: ‘Now, they were more dignified, if less graceful. It was the gray lining at their hair’s root, under the dyes.’ The reader is informed of Rob’s death in passing, but Sandi already has another hockey player in her sights. Then Kay and Sandi skate out of the story, but nevertheless, ‘[t]he rink holds them there like a white, lacy band’.

At this point, one might argue that The Rink does not give us the full course of Kay’s life, since Ankeny commences her narrative in medias res. However, the bookending sections that only describe the rink might be thought of as proxies for birth and death, since Ankeny has tracked the full autumn-to-spring life cycle of the rink itself. Essentially, the rink’s story is Kay’s story, but it is also the stories of everyone who has ever skated there, but these can only be captured for as long as the ice stays frozen. The Rink thus culminates in a poetic meditation that showcases the effectiveness of the rink as metaphor for the ultimate transience of our lives:

There is one final skate where the ice takes the last impressions, the scrapes and edges carving into the clear surface, giving last depth, a final calligraphy of curves. […] each skate carves deep, leaving its mark, a fossil of itself. Then the rink is left to thaw and the ice melts into puddles and the marks on the ice turn into nothing more than drops of water that dissolve into air, the skaters long gone, their effort turned to vapour.

2 thoughts on “‘The Rink’ by Matthew Ankeny”