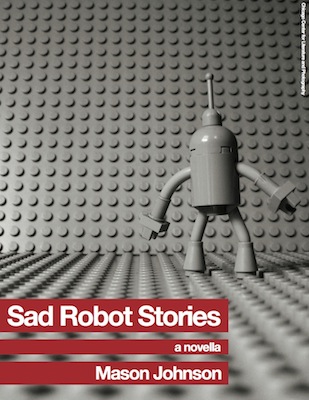 Whew. Just let me sit down a second, catch my breath. Whew, okay, yeah. That was Mason Johnson’s Sad Robot Stories, a free PDF (donation if you’re feeling so inclined) published by the Chicago Centre for Literature and Photography, and absolutely nothing to do with any other sad stories featuring robots by the same author with the same title that you might have encountered elsewhere.

It’s a hell of a ride, this hundred-page jaunt through the heart of the human experience. Following our eponymous sad robot through a journey both apocalyptic and messianic, this story touches issues of gender and species identity, love and affection, the forms and categories of faith and religion, the end of functioning and the desire to be ended (which Johnson doesn’t hesitate to call ‘death’ or ‘suicide’). 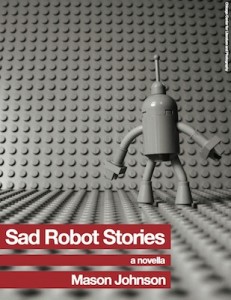 The meaningfully nameless ‘Robot’ begins the story, as far as he knows, the only robot in his factory (and quite possibly his culture) to have become dissatisfied with its place. Like modern-day robots his initial purpose is simple and repetitive: to check that washers are the right shape, and discard those that aren’t. We have robots that do this nowadays, but they don’t have burnished bronze skin and identity issues, just a light and a flicking metal finger. It’s a worthy and ancient sci-fi convention, making robots human-shaped even when they really have no need to be, and much of Johnson’s book revolves around the consequences, big and small, of that hubristic decision.

A listless dreamer, Robot is shunted from one job to another, functioning just as well as his co-workers, but fundamentally unsatisfied with any of his mindless work. He befriends the human Mike, who works in the same factory, and shoots pool and the breeze with him after their shifts end. Mike is a coarse former loser reformed and redeemed by love, and bit by bit, Robot finds himself being installed in his family, reading endless pulp novels, and learning the meaning of love.

Now, unlike most, I mean that very literally. Johnson’s Robot has feelings (in fact, all of the robots in this story have feelings, but seem mostly unaware). Robot, a functionally-immortal bronze colossus wracked with Marvinesque ennui, is the only one to learn the meaning of love. But love, for Robot, is a necessarily unrequited thing; he’s never told how to love, because nobody even imagines the possibility. Lacking membership of that emotional paradigm, he’s left alone, outside, Othered.

Exiled from human culture by his metal skin and alien mindset, and exiled from robot culture by his self-aware emotionality and longing after sensory experience, Robot is left entirely alone when the apocalypse exterminates humanity. In the hands of a less devoted author, the resulting suicide attempt – putting himself through an experience which would kill a human in moments, but surviving thanks to his own resilience – might have been darkly comic, but Johnson leads the reader through every thought. As the pain of loss wears off, the will to keep living returns. It’s harrowing and awful and you just can’t stop going, and that’s exactly the point. Robot’s life is harrowing and awful, and he just can’t stop, and he doesn’t even really have the language to express his sorrow.

For the most part, humans can only guess at the purpose of their existence. To fill the void in our understanding we tell stories, and it’s from these (not some inner instinct, like programming) that we learn the meanings of our emotional qualia. Johnson’s robots (particularly Robot himself) have picked up memes from their parents’ societies, but without any offer of adoption, both of the subcultures we meet suffer from powerful, alienating uncertainty. Each has, for example, either a ‘male’ or a ‘female’ chassis, to make their masters more comfortable, but since each individual has identical programming and no education about human culture they struggle to understand what, if anything, this means.

Johnson seems to zigzag around this idea. Robot, which identifies as male, has two loves in this story: Mike the human and Denton the mostly-androform female-identifying robot. Talking about Mike, Robot’s idea of his own gender seems irrelevant, and since he never confesses that love, we never really see the issue laid out. But Denton, who vividly describes her subtle, uneasy sensation of possessing the wrong chassis, obviously has an idea of her own gender as a relevant feature of her identity. I’m fairly certain that Johnson’s robots possess epiprogrammatic thoughts – let’s just call them ‘souls’ for now – but I have no idea if those souls are gendered or not.

Down each fork of this road is a different story: in one, a bisexual, species-queer protagonist struggles with the impossibility of confessing his love for his human friend. In the other, a robot adopts enough human ideas of gender to suffer dysphoria issues despite having neither gender nor sex. Both are fascinating, and both are brilliant, and like the end of Pan’s Labyrinth, I don’t really want to know which fork the author took. I’ll gladly discuss them both down the pub.

The world is full of stories detailing how robots, in the guise of anthropoid metal golems with human minds, might feel about identity and slavery. But this novella takes the golem conceit and skates around the big-T Themes, rather than going through them in the usual way. It winks meaningfully, even flirtatiously, as it passes them by, but you’re too busy with the experience to give them the attention they deserve on the way through. Only once it’s over do you look back and realise, whew, quite what a journey you’ve just been on.

Through love and loss and the end of the world, Robot endures. But as tough as his physical body might be, his soul is filled with sorrow. He pines for the return of experiences he never felt, and feels both the loss and the lack as fresh wounds. Reading along with him, I felt much the same, and it hurt so good.