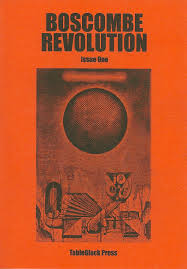 Boscombe Revolution is an anthology of twenty-one poems responding to ideas of ‘place’ and ‘revolution’. What this results in is an interesting array of poetry from writers across the globe – the poets hail from Athens, Milwaukee, San Francisco and Boscombe itself – who interpret ‘revolution’ as societal issues, science lessons, leaving childhood, caravans and consumerism.

Some of the most interesting poems in the anthology are those that are more experimental. Iordanis Papadopaulos’s ‘watching people big view’ is constructed from lines which mimic online shopping transactions: 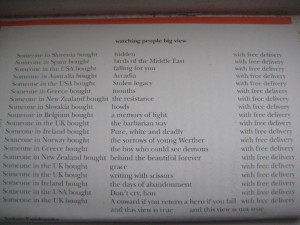 The poem seems to be quite pessimistic, drawing on the definition of revolution as ‘a cycle of events’: people are reduced to nameless figures that are caught in a cycle of buying emotions and cultural history (‘Someone in the UK bought            a coward if you return a hero if you fall          with free delivery’). However, Papadopaulos doesn’t assume that we’ll instantly agree: the final line: ‘and this view is true and this view is not true’ allows the reader to enter into a debate about what this poem actually means.

mpcAstro’s contribution to the anthology is as interesting as his name (and his writer’s biography in the back). ‘Whore D’Oueuvres’ takes Lea Chi’s statement: ‘Metaphor’s the first whore’ to create a stimulating satire of metaphor. mpcAstro takes familiar sayings and transforms them: ‘How now? Cows become clouds’; the poem uses these to descend into a madness of imagery, where words are elided and fingers become ‘sunbursts flicking endorphincascadingmanna meringue’.

There is something dark about this anthology: the poems tend to have very cynical speakers. Tim Cummings’s ‘Lessons of the Bullingdon Club’ initially seems to satirise the exclusive society’s ‘jargon of class and income’, but the tone of the poem becomes far more sinister, with the speaker seeming to threaten the reader:

[…] now it is time for you to listen
and you a going to listen for a very
long time indeed, and it will cost you.

Darkness is also at the heart of Tim Seurmondt’s ‘He’s Dancing in the Alleyway’, one of my favourite pieces in the anthology, which is about the narrator’s memory of their father dancing. However, while the poem’s tone is at first sceptical (the father is described as the ‘man who defined / stiff as a board’), it rapidly unravels into one of the most emotive poems in the anthology as the father disappears ‘around the corner,/ for good’.

Ellie Walsh’s Half the Ram’s Eye offers a very different take on ‘revolution’. Using ideas of haruspicy (the reading of omens from the entrails of a sacrificed animal), the poem narrates the dissection of a ram’s eye in a science lesson. Loss is a key theme:

slipping away from tweezers.’

It appears physically, as the teacher fails to execute a skilful dissection, and also psychologically, as s/he loses the children’s attention (their voices ‘sieved through the lab windows’, much like the ‘irretrievable’ images that the eye she held must have once seen). This poem is concerned with a lack of control, and this idea is embodied in its shape: the lines often bleed to the margins, mimicking the slippery parts of the eye and the speaker’s waning sense of authority.

In an anthology where ‘revolution’ is the starting point, it would be naïve to assume that the poems could be connected by theme. This is the root of Boscombe Revolution’s success: it offers an eclectic mix of poems about a variety of subjects; there is no given style or theme, just exciting and interesting poetry. Editors Paul Hawkins and Simon McCormack seem to understand that a new anthology might be bypassed, and so have worked hard to create something that should be difficult to miss: Boscombe Revolution is beautifully printed, and each poem offers the reader something different. The anthology undoubtedly deserves many more issues if it will continue to showcase poetry as exciting as this.