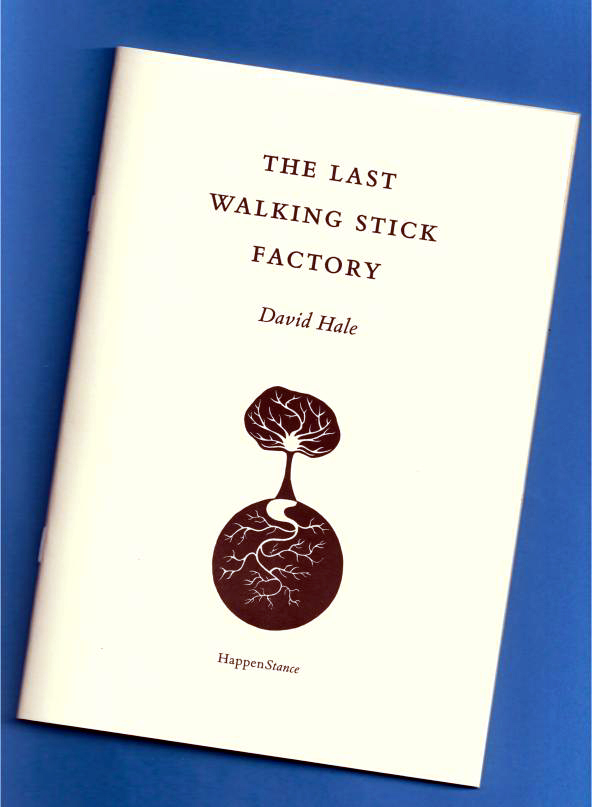 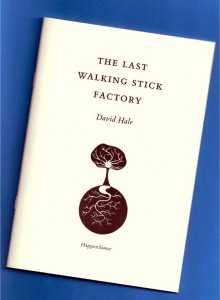 The Last Walking Stick Factory is Hale’s first pamphlet of poems, yet there is a feeling of maturity in the work. These poems have been a while in the crafting; there is a slow patience at work which sits well with the main theme of trees and wood. There is also the confidence of someone who reads poetry and understands how it works.

The opening poem, ‘An Ash’ tells the life and afterlife of one particular tree. Knowingly placed as an opener, it makes a strong start to the pamphlet. The language is tightly packed, concise and accurate:

Storm-felled millennium time, taken by a southerly,
the weight of the wind after weeks of rain,
it lay there weather darkened

Each piece has its own story, its different outcome, and Hale saves the best for last: a table top for himself from a piece ‘fluffy with rot’. The best image in this poem is in the closing line: ‘the grain’s salmon paleness’, which is powerfully visual. I enjoyed the particularity of this poem and its physicality. For the same reasons, ‘Apple time’, about pressing apples into juice, appeals, with the scrummy lists of names like ‘foxwhelp, dabinet’ as memories of the knife-grinder he used to know, and his love of apples, surface and bring the poem to life.

Although there is much to like in these poems, there are some weaker pieces in which Hale goes beyond description and waxes philosophical, such as ‘The queue’, which for my money rambles rather pointlessly (as queues can do) and strays into being too grandiose and portentous for the subject matter:

having negotiated a short spell of leave
from the apron-strings of the escritoire,
and was shuffling slowly eastwards with the rest

It continues in this heavy-handed way for several more stanzas. This idea could have worked had the language been tighter and the rhythm less prosy. The ominous ending is perhaps the point of the poem:

Rumours of roadblocks ahead, of uniforms checking
papers down the lines, of random beatings and people
being bundled into barges down by the dark quay,
of all the fires burning so brightly on the other side.

If only the rest of the poem were as strong as the ending. ‘July 1st’ also attempts a bigger subject, but does it very effectively using the work of preparing wood for use. He mourns the Gloucester regiment in particular, men who were skilled in what he is doing now, and that precision of place gives the poem its strength. Doing one thing resurrecting a memory of others doing it is not an original trope, but the poem is not diminished by that.

I do like the coherence of the pamphlet and the deep knowledge of the subject matter, but for me in some places the language is a little flat, lacking in excitement and fizz. But overall it’s a pleasing debut.