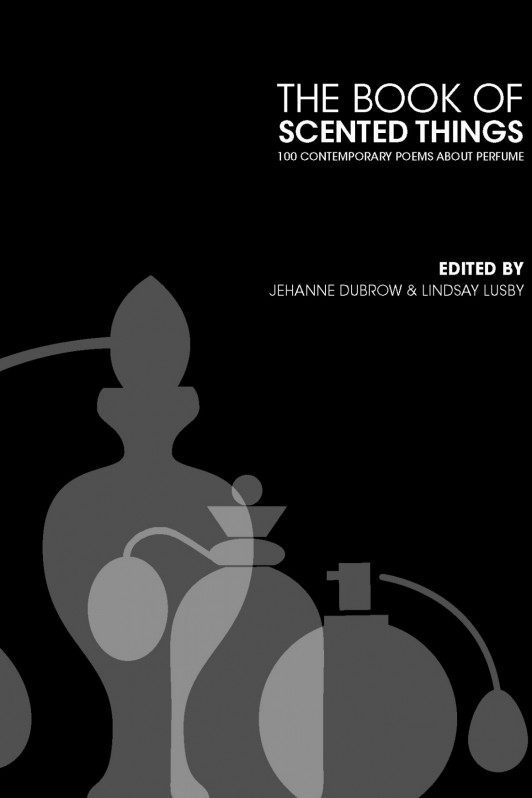 The Book of Scented Things: 100 Contemporary Poems about Perfume, edited by Jehanne Dubrow and Lindsay Lusby, is the first of a series of trade paperback anthologies to be published by the Literary House Press, the literary arm of The Rose O’Neill Literary House based in Washington College. ‘Anthology’ etymologically means ‘a collection of flowers’, an apt form then for a collection of poems inspired by perfumes. Having said that, the cover thankfully avoids being Cath Kidston-esque, all floral patterns and boudoir-chic, choosing instead refreshingly stark grey silhouettes of perfume bottles, their shadows impinging on each other. Credit for this goes to the designer Carla Echevarria. 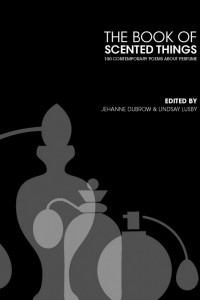 My interest in reviewing this anthology was not totally unbiased, so I will declare myself now as one of the co-organizers of Penning Perfumes, a UK-based creative collaboration between perfumers and poets, which led to a series of live events and two micro-anthologies in 2012-2013. I was really keen to read The Book of Scented Things, not only to see how American responses might compare to our (mostly) British ones, but also to see whether we chose the same perfumes! My first instinct then was to head straight to the Matchmaking Notes at the back, where the perfumes behind the poems nestle with the contributor biographies. There were only two crossovers: Narcisse Noir from Caron and Jeux de peau from Serge Lutens, both fascinating for me to compare with the poems generated in Penning Perfumes, not least as we gave Lutens to three different poets without their knowledge. Only 2 out of 100 might seem like a small number, but it’s easily explained by the scale of the endeavour, which makes sticking to certain houses undoubtedly more practical; the names Tom Ford, Atelier Cologne, Providence Perfume Co., Jo Malone and Bond No.9 echoed throughout the profiles.

This is to say that there is no need to convince me on the logic of pairing perfume and poetry, but for anyone in doubt, both the introduction by Dubrow, and the preface by Alyssa Harad tease out the benefits of pairing two art forms some might qualify as niche or irrelevant. As Dubrow writes, ‘perfume, like literature, can seem formulaic when summarized’, and yet both have the power to haunt us. ‘The intangibility of scent, its ghostliness, is part of its power’, writes Harad, something one could attribute to those elusive poems that grab you by the guts for no deconstructable reason. I’ve cherished every instance when an audience member at a Penning Perfumes event would confess that they neither liked nor understood poetry or perfume but that combining the two changed that. Even without scents to accompany The Book of Scented Things, the knowledge of the inspiration behind the texts provides an accessible entry point into these worlds.

One key difference between our projects I think, is that the poets of The Book of Scented Things were aware of the name of their perfumes, though the scents themselves were decanted and distributed in identical vials. What this brings is a palpable confidence in the writing through the possibility of research – I particularly enjoyed two Basenotes.com reviews being used as epigraphs in Cody Walker’s ‘Pure Oud by Killian’ for instance. Not all poets seemed to agree with the personalities attributed to the scents by their makers. Matthew Thorburn when given Manhattan from Bond No.9 lists the smells that he thinks would suit the name better:

crates full of paperbacks for sale on the sidewalk,
like the fishmonger in her gut-mapped apron,
fish scales glittering on her wrists.

There is also a real upfrontness with the challenge itself, principally found in poems clustered near the start of the anthology with the first three titled: ‘On his Reluctance to Contribute to The Book of Scented Things’ (by Amit Majmudar), ‘On Receiving a Vial of Perfume in the Mail’ (by James Arthur), ‘Poem for a Vial of Nameless Perfume’ (by Matthew Zapruder). Their close proximity does them a disservice. By the time we get to the ninth poem (‘The Lost Bottle’ by Rachel Hadas) and her ‘Given the sweet assignment / Write about this perfume’, the novelty of describing a mysterious package containing scent has worn off.

The idea of ingredients is an object of fascination in several of the poems. Jane Satterfield’s ‘Menthe Fraîche’ intriguingly calls on the words of others (James Heeley, Michel de Montaigne, and Andrew Marvell) as if they were just another ingredient to weave into her poem:

the trail of each of twenty-eight

to better fit for contemplation

arboreal as the frosted sage

Meanwhile, Emilia Phillips’s ‘Midnight Noir’ begins with the cliché of the person unaware of the amount of scent they’ve doused themselves with (‘In a crowded elevator, you smell a perfume– / too strong– & think it rude’). She hoists it above observational comedy by deconstructing each recognized smell, using her ‘whole life to conjure it’. There is a real thoughtfulness to both of these approaches, recognizing perfume as an evolving scent made up of different parts, and attempting to recreate this form within their poems.

Two of many standouts in this anthology are Shara Lessley with ‘Scent of the Gods’ and Chad Davidson’s ‘Frozen Music’. Lessley’s poem is a breakneck ride through a city unleashed, references raining on the zigzagging lines, delighting in contrasting ‘beautiful’ smells with their opposites. Davidson’s looks more contained at first glance with its neat stanzas and talk of architecture, but appearances are deceiving like a song or a scent which is:

all soft on the skin but barbed underneath
a handful of forks under a napkin?

Both complex poems, releasing engaging top notes, intriguing us with their middle notes, leaving behind a satisfying base note, or as Davidson puts it ‘an odor like money, on fingers, after it is spent’.

The Book of Scented Things: 100 Contemporary Poems about Perfume doesn’t contain many overly experimental poems, whether in form or content (notable exceptions include Seth Abramson, Rebecca Hazelton, Leslie Harrison, Alan Michael Parker, and Sarah Vap). This is a minor quibble, the challenge is the experiment, there is no harm in sticking to the bottle shapes you know. Within the mostly left-hand margin free verse, one can still find an extraordinary range of approaches, which are at their best when they stray or manipulate common tropes associated with scent. This is a beautifully produced anthology and if it’s representative of The Literary House Press’s output, then I can’t wait to see what they do next.

The Book of Scented Things: 100 Contemporary Poems about Perfume will be released in October 2014 and distributed at spdbooks.org.

‘The Long Woman’ by Charlotte Gann

August 23, 2011 Editor Comments Off on ‘The Long Woman’ by Charlotte Gann

One thought on “The Book of Scented Things: 100 Contemporary Poems about Perfume (ed. by Jehanne Dubrow and Lindsay Lusby)”