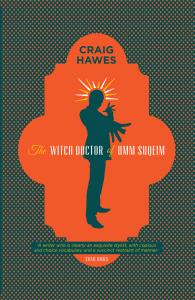 Reading the stories in The Witch Doctor of Umm Suqeim is a process of transportation. The tales in the book take you to the dramatic landscapes of Dubai; and then let you explore the alien places through the rhythm of narrative. Craig Hawes’ ability to create an absorbing sense of place is beautiful. There are also numerous signs of invading globalization within the stories. Coca-cola, iPads, Native American dream catchers, and Skype are all casually mentioned alongside traditional elements of Dubai’s culture. Globalization itself isn’t directly mentioned in the text, but by being frequently suggested it becomes an ominous background hum throughout.

The characters in the stories are just as complex as the different environments of Dubai. Many of the characters are immoral or detached from life, yet they refuse to adhere to 2D ‘evil’ motives. Instead Hawes takes the opportunity to explore his flawed characters with a sense of humour and honesty. The result of Hawes’ courage is a collection that boldly makes a statement about each area of what it means to be human.

The stories are a real mixture, and this is despite them all being set in one country. Hawes doesn’t feel obliged to necessarily fulfil the usual story structure, causing some of the stories to be more like situations than a full-length short. However this only adds to the pace of the book and keeps the reader on their toes. In a similar fashion the stories each have an individual tone, though they all end up encompassing some kind of tragedy in their own way. The misfortune of Hawes’ characters gives the reader a point to fixate on, and possibly compare to their own life experiences. Yet the same grim outlook makes a couple of the stories almost impenetrable (not always a bad thing). The sense of mystery is added to because ultimately the only answers Hawes provides are in the form of metaphors or riddles. For example the image that can be found in the final paragraph of ‘Pictures in the Dust’ – ‘An intricate and perfectly symmetrical butterfly freeing itself from a cocoon, dangling from a palm tree’. What exactly this means is left to the reader’s own mind.

The most alarming story of the collection is ‘Whorelands’; a story that juxtaposes war with sex (not unlike Sarah Kane’s play Blasted). ‘Whorelands’ shows an unusual, non-sexual, relationship between a prostitute and a soldier, over one night in HOR AL ANZ (AKA Whorelands) a place that contains what the name suggests. However, sex is attempted and failed early on, leaving in its place a piercing emptiness that plays with ideas of survival, loneliness and the impact of physical human contact. This one story gives the entire collection a focus, and puts all of the other stories into perspective. All of the other plots lead to themes of isolation and basic human contact. Each story explores a slightly different form of these themes and in very different ways, yet they are most definitively explored in this one story. All emotional roads in the book seem to lead back to HOR AL ANZ; the soldier who is passing through exotic places without ever getting a chance to see them; and the prostitute who is trapped in her shell of a life.

Some of the other stories in the book make reference to ‘Whorelands’. Linking the stories like this creates the illusion of them appearing more realistic. The links make Hawes’ world seem more cohesive and planned out; they also push the story of ‘Whorelands’ further into its position as the centrepiece of the collection.

The two characters in ‘Whorelands’, alongside the others in the collection, could plausibly be placed anywhere in the world, but Hawes chooses to put them in Dubai- a country with a massive rich/poor divide, and a religious state. The environment of Dubai exaggerates the themes he has chosen to express. Humanity seems at its most desperate in a culture so dramatically ripped apart by class and religious differences. The partitioned society of Dubai also allows Hawes to look at a wider range of human experiences. Some of his characters are wealthy, some are dismally poor, some are ex-pats, some are locals, some are extremely religious and others break as many religious rules as possible. They all live in the same country, yet their environments are all very different.

The Witch Doctor of Umm Suqeim is a book perfect for any aspiring traveller (whether you travel in your imagination or physically is up to you). It takes on a huge breadth of themes, and refuses to be unoriginal or dishonest whilst examining them. Dubai may be a foreign country to most of Hawes’ readers, but he makes it accessible to an audience from any culture.