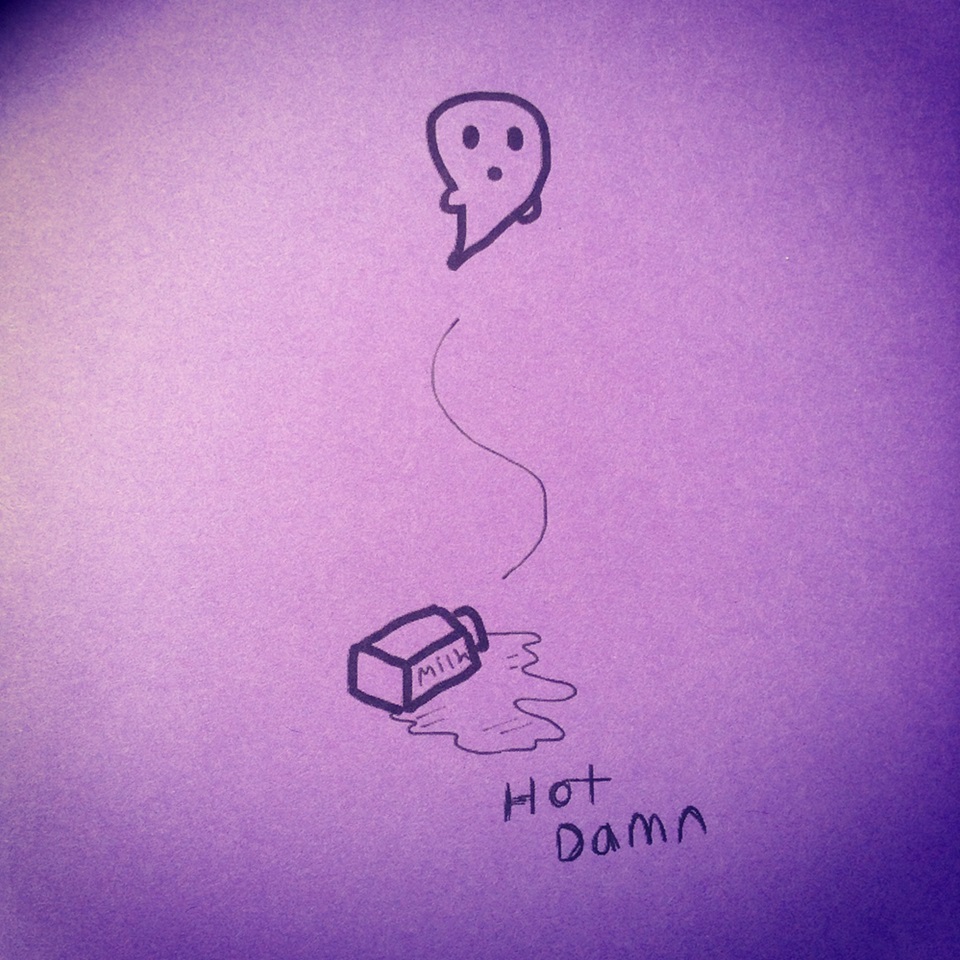 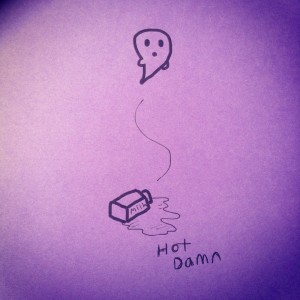 The little ghost on the cover may be the first thing you focus on when picking up Hot Damn, but it is the spilt milk carton it escapes from that is more apt to the first reading of this pamphlet: blood and vitriol have been spilled on many levels, and many of the poems try and work through the pain suffered in the narrator’s recent past. The ghost is a key indicator of Woodward’s preference for the seemingly tangential; one would imagine if the ghost and the milk appeared in any of the poems (they do not), the subjects would appear as consecutive words which may or may not be part of the same sentence.

The ability to pivot between subjects in this manner is crucial to making much of the poetry here work, and nowhere is this more evident than the first poem, ‘i love the moon’. The first line evokes the rising of the moon in a manner that promises seduction before changing direction:

the moon rises over a tree with a robot’s muteness half way between gutspill and mind your god damn business”.

The movement here conveys the informal but frank attitude that is on display from the copyright notice onwards:

Cat Woodward would like her copyright to be respected where money and kudos are concerned, god knows she needs more of both.

The sharp tone of this phrase – not a sentence, not a whole line and no punctuation to allow easy distinction – is also the opening gambit in a sequence of phrases designed for the expression of intense emotion.

These emotions are mostly easy to buy into: ‘I love the moon’ conflates desire with a certain uneasiness:

‘on looking for one’s enemy…’, creates a lot of violence out of short lines and few words; ‘sayanora suckers’ seems as though it will continue in this manner before eschewing violence for agony whilst ‘a waitress to a Chinese customer’ has a clear element of lust to it.

The latter poem is one of the most distinct in the collection. One of the recurring themes of the pamphlet are the lines between love and lust, and the attempts of the waitress to put various objects inside her provides the most exposed sentiment in the pamphlet:

i put a cucumber inside me. i put an egg inside me, it came out cooked. i put in a carrot, the handle of a hair brush, a cold, cold gear stick. chinese girl, im trying to wrap my legs and arms around you, the only place i can do my loving, where there is room for you.

The last line of the poem “but that is not the point of chinese girls”, acts to resolve the poem in isolation as a questioning of identity, and some of the wider themes of romantic inadequacy. It is almost a shame that what follows feels anticlimactic: ‘tender’ in particular does not seem to decide whether it is a fresh start as a love poem, or a continuation of the inadequacy theme; the last couplet encapsulates that indecision for the whole poem.

There are some distinct motifs within ‘Hot Damn’: the moon, the robot and the dog being the outstanding ones that bind the themes and strands of the individual poems into something that, considering how opaque some of this can be, does a good job of creating a cohesive read. The dog in particular is a character that can be bought into; the final poem ties the creature to the regret and frustration that at this junction has mellowed from the more visceral emotions of the first couple of poems:

a dog is produced by home, therefore
silence hunts dog

This pamphlet could be held up as a perfect example of a “promising debut” – whilst still having some way to go in terms of clarity particularly, Woodward has ideas, strengths and an ability to manipulate English language and form that is worth keeping an eye on.