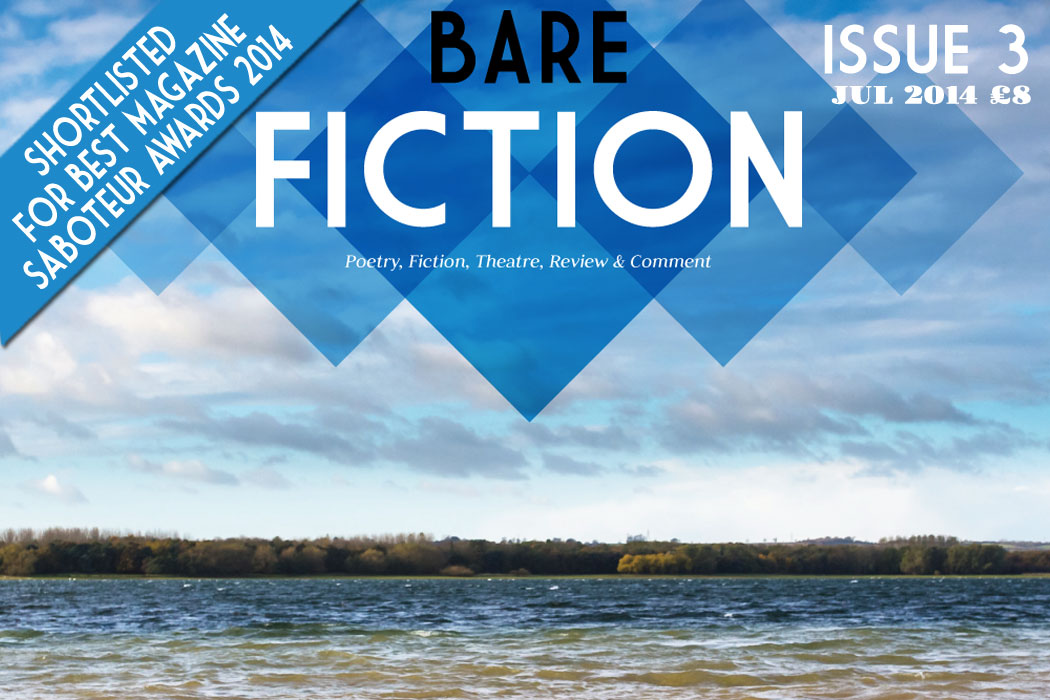 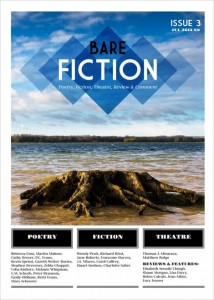 Now in its third issue, the new 80-page literary journal, Bare Fiction, is a delightful read. Boasting a contemporary, forward-looking and experimental slant, the magazine features an ambitious range of writers, including many exciting young voices published for the first time.

Its poetry section reflects a bold, thoughtful selection of materials, themes and style. Conveying the complexity of emotions experienced in marriage and childbirth, the poem ‘Marriage Is A Room Of Lit Bulbs’ by Rebecca Goss leaves a strong impression:

There’s a sharp sound,
a filament giving out, pop follows pop, a series
of small explosions, as she makes her way to the door.

Dangerous, beautiful and inevitable, these ‘small explosions’ are challenges that a mother must face alone.

My other favourite is Usha Kishmore’s ‘Bastard Children of the British Raj’, an introspective piece that reveals the hopes and disillusionment of the diasporic, post-colonial generation, conscious of their own hybridity and their unfulfilled longing for an imagined home:

What shall we call ourselves?
Diaspora, self-exiles, immigrants,
bastard children of the British Raj?
We wander everywhere and anywhere

While most of the poems featured come across as poignant and incisive, Mary Scheurer’s ‘Ghosts of Follicle’ is, by comparison, lacklustre and less adventurous: the fascination at what lies beneath the skin as hair transplanting applied to the ‘chaste head’ appears quite repetitive.

The journal is densely packed with provocative stories. Despite its short length, the flash fiction piece by Jane Roberts, ‘The Ice House’, shows excellent craftsmanship in the manipulation of suspense and unease, interrogating the reader on the fate of Daisy Mulligan, followed by the stark image of three body limbs. I also admire Charlotte Salter’s story, ‘The Fall’, a tender narrative on a butcher haunted by a surreal female figure who lures and torments him as he faces the grim prospect of divorce:

Here’s the thing. He can’t remember if she’s one or three or sixty girls from the past. Can’t remember if she’s nothing but the combined face of all women on television, can’t make out the separate parts of her amalgamation or who has made who. No idea where her inventiveness has come from.

Stuart Snelson’s ‘Scream Quietly’ is an enticing piece that examines the boundary between reality and art, pain-giving and vicarious sadism. Through documentary-style photography and exhibition, the protagonist is shown to expose the unjust suffering of women who have experienced domestic abuse:

At night, in his studio, there was no respite from suffering; from bulldog clips hung contact sheets of battered women.

However, the moment he becomes a first-hand witness of such cruelty in his studio, confronted by the hostile husband who has come to chase after and to threaten his abused wife, the protagonist hesitates to come to the vulnerable woman’s rescue.

The magazine also showcases new theatre writing, an encouraging gesture considering the rather limited venues to discover scripts by emerging writers. My favourite is the short play ‘Last Words’ by Thomas Misuraca, which exposes the danger of a man’s self-importance, as Brian’s father, Edward, refuses to die without leaving the posterity with a grand, dignified gesture and a witty remark.

Among the reviews and writer interviews, Lucy Jeynes’s article on The Best British Short Stories 2014 edited by Nicholas Boyle (Salt Publishing) offers refreshing, personal insights on the stories selected in the anthology, surveying the limitless possibilities in good story-telling, and showing the book’s tremendous value as a ‘gateway to wider reading’.

Launched less than a year ago and already commanding a strong online following and social media presence, Bare Fiction has found and filled an important niche in the market of literary production, and proved itself an attractive playground for new and established writers to showcase their more experimental works.