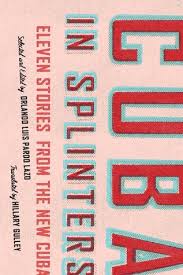 Cuba In Splinters is a collection of stories written by Cuban writers, ranging from tales of prostitution and drugs to knife fights and zombies. Orlando Luis Pardo Lazo has managed to put together a wonderful selection full of quite unique stories that together create a strong image of Cuba.

The collection starts off strong with a story about love and loss. The first paragraph, and even just the first line, has such a strong voice that I couldn’t help but read on to find out more. It’s one hell of an introduction to a collection; Lazo definitely knows how to order pieces. But let’s not forget to give credit where it’s due. In just ten pages the writer, Jorge Alberto Aguiar Díaz, manages to get us to love a woman as much as the protagonist does, and then to mourn for her loss too. It’s a masterful piece of writing, perhaps one of the strongest in the collection.

You can imagine my surprise then when I came to read the second story and found myself regrettably bored. I get what Lage is trying to do, I really do get it, but he just doesn’t pull it off. I mean, I usually love superhero stories and that’s exactly what this is, but instead of exciting me it remains weak. It’s as if there’s nothing to it, and I think it’s because of the interview style format. I mean, I love the idea that Velazco has accidentally gained this power to stop time, and I love even more that the higher powers in the country are abusing this, but when reading I just found myself asking, so what? If it were to be written from Velazco’s point of view as it happens I may care more, but I do not care for a man reflecting on his past to an interviewer.

My favourite story in the collection is ‘That Zombie Belongs to Fidel!’ by Erick J. Mota. It’s a zombie story, yes, but it’s also strangely realistic. It’s different to all others, not the usual zombie apocalypse run for your life sort of stuff, but instead it’s a well thought through and convincing zombie neighbours stuff. I found myself almost believing that a virus has created these zombies, and then I was scared when the virus evolved to make the zombies seem more human. But then there were the small things too; kids dressing and acting like zombies to be fashionable, zombies getting higher meat rations, just small things that really centred me in the world the writer has created. Not only that, but he writes ‘in some way, this country has always been made of zombies’. That got me. It’s so simple and you hear it all the time, but in this piece it stood out as a serious point needing to be made.

I find the rest of the stories vary from great to mediocre, but they all seem to fit together in some way as a collection. I enjoyed the brutal reality of ‘Exorcism Zone’, how it was sadly believable that a woman would take her son to a train station and just wait until a man was willing to pay her for some sort of sexual favour. I enjoyed the story in which a group of teens get into a fight in a club, a fight that ends in a stabbing. In this story they’re all given nicknames that make them seem more real, as if they actually exist and the piece is a documentary rather than fiction.

I found myself loving ‘Havana Light’, a story about a heavy smoker who eventually learns how bad smoking is for her. I love how the story captures a child’s rebellion, and how it portrays the cigarette as a constant companion for the narrator, as a friend that’s always there for her. This story almost makes me understand why people can’t seem to quit smoking, something that I’ve never seen done so well before. Even at the end when she gives up smoking the writer eludes to the idea that she’ll be back in the local shop soon enough buying some more. Brilliant.

The last story is written by the editor. I would usually frown quite heavily upon an editor who would edit his own work, but this piece is pretty close to perfect. The voice is a little conversational and brings us in with wonderful sentences like ‘December had tried to dress itself for winter’. And then the ending, it’s almost as if the piece was written specifically for this collection. If not, it again shows Lazo’s great editorial skills. The last two sentences, although written a little sloppily, sum up the entire collection so perfectly that if there were more after them I wouldn’t have continued to read.

‘I wanted to go back to Cuba, dammit. But dammit, Cuba most certainly did not want me.’

I think Lazo should be proud of what he’s created here. Nearly all of the stories fit so perfectly together, all different but somehow right together. There’s the perfect mix of sex, drugs and zombies, and some of the writing is so poetic (especially in ‘Skhizein (Decalogue for the Year Zero)’) that I found myself lost in the writer’s world. Cuba In Splinters is not something you find everyday, but I think there should be much more like it about.