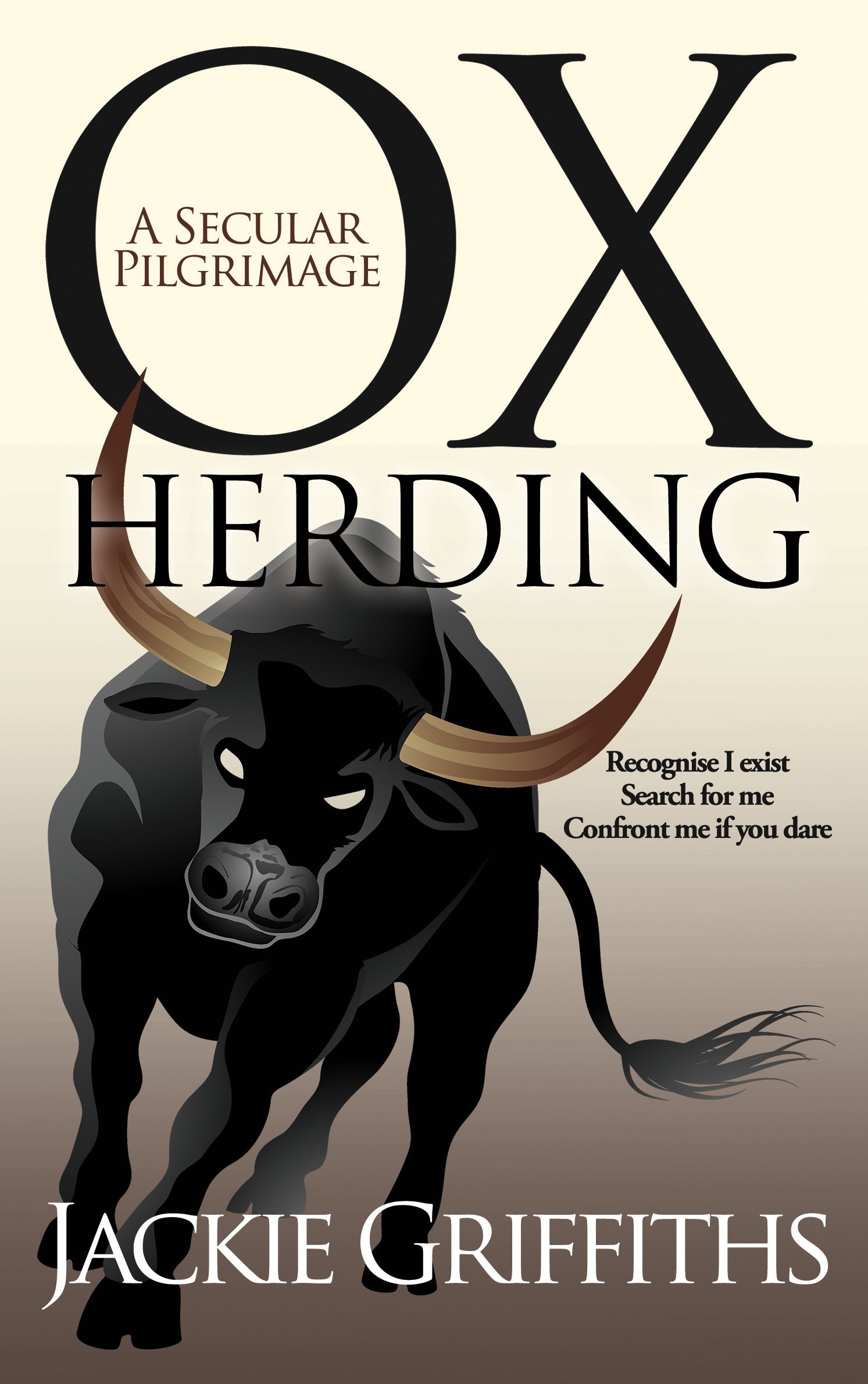 Although described as a novella, and wrapped in a fictional format, Ox-Herding… explores profound philosophical issues, indeed the meaning of life, no less! I was bemused, after I had read it, as to why Jackie Griffiths had made no reference to the symbolism of the ox which appears throughout, especially as in a section at the end entitled ‘Decoding’ she offers a number of other useful explanations of allusions in the body of the book. So I did my own research on the possible meanings of the ox and found out about the Ten Ox Herding Pictures, a classic text of Zen Buddhism. I then discovered that in later editions of her book Jackie Griffiths has included an Introduction explaining that it is her interpretation of Ten Ox Herding Pictures, setting out in ten chapters the stages of that journey of self-discovery. While she sub-titles her book ‘A Secular Pilgrimage’, it is, in the widest sense, about a spiritual journey, but one in which organised religions are examined and found inadequate. 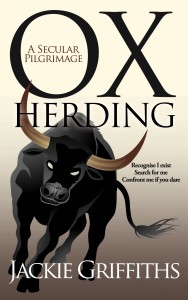 At the start of the novella, Jae is dissatisfied with her life. Her grandmother has recently died, leaving her a small inheritance and the instruction:

Seek and ye shall find.

Perplexed at being given a quote from the Bible by a women who was a life-long agnostic, and with a sense of disquiet which predates her grandmother’s death, Jae sets off on a quest. As in the best tradition of mythical story-telling, she crosses an ancient bridge which she can’t remember ever seeing before:

…she has an uncomfortable feeling that this crossing is entirely a one-way journey; that there’s no possibility of turning round and going back the way she came.

She encounters Christians, Muslims, Buddhists, Humanists and Existentialists, and rejects the sense of security which they variously offer as merely offering somewhere to hide. Therapists and Atheists are no more satisfactory to her.

On the next stage of her journey Jae, in her everyday life an enthusiastic member of an amateur choir, finds herself literally thrust onto the concert platform singing flawlessly, fame and fortune potentially in front of her. But this turns out to be another delusion.

So she battles with the ox in its various representations, be they as animal or the man Douke, all of which are aspects of her own ego. Douke is a changing representation of the masculine who is described in the Decoding as both ‘a disguised way’ and ‘a clown’. In different ways he demonstrates the immense power of Jae’s ego, and also speaks to her directly about the nature of the journey beyond it, telling her:

…even the search itself must come to an end. Walking the Way, becoming an ox herder, is akin to renouncing everything, and then after that, renouncing renunciation.

Full credit to Jackie Griffiths for conveying a lot about complex ideas in Ox-Herding. I found the most engaging and compelling chapters of her book were those in which we as readers see Jae engaging in her struggles in a physical way. The battle with the ego is of course internal, but the internal conversation is less vivid, less energetic and less convincing in this book than the scenes which we can directly visualise. Hence the power of the original metaphor of the ox.
I have mixed feelings about not knowing while I was reading Ox-Herding that Jackie Griffiths was deliberately and specifically following the pattern and shape of the text of Ten Ox Herding Pictures. Had I known this I would have been less mystified by her decision to leave her Chapter 8 as a series of blank pages with just the (to me equally mystifying) words:

Having read her Introduction to the later edition I understand her thinking, as it parallels the structure of the model she is following, but without knowing this it seemed curious to me that a writer should fail to use her medium of choice for communicating, that is to say the written word!

I was also a little perturbed by a lengthy quotation from Kenneth Grahame’s The Wind in the Willows which I felt was taken out of its very clear Pantheistic context.

Those quibbles apart, Ox-Herding is a book which will interest many who are engaged – are not we all? – in considering why we are here and looking at how we can lead more fulfilling lives.