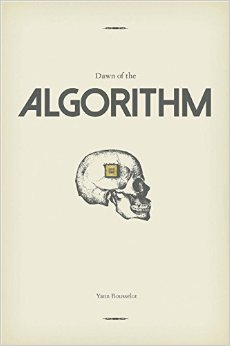 Yann Rousselot’s collection Dawn of the Algorithm takes us into a strange, often frightening prophetic world. He lunges into pop culture with all the abandon of a poet who knows the territory, exploring all sorts of possibilities in a language/world that is generally alien, yet sometimes strangely familiar. Rousselot explores the possibilities of words, neologisms and overworked syntax, mixed with startling imagery.

‘The Human Billboard’ sets the scene for what is to come, positioning us in a rupture between the present and prophecies that the ‘end is nigh’. The speaker sees Vesuvius, the mountain which ‘never dies’, shake off the avatars of its history ‘like fleas from a dog, (seeing) the angels fall!’, presuming some changed world which we have not yet begun to understand.

Reversals and exchanges resound throughout: for example, the Third World will provide an ‘influx of disaster aid’.  ‘Post Human Neo-Tokyo’ brings this sharply back to the speaker, who ‘speaks supernova, (who) speaks flame’; all he speaks is ‘post human’. Disease and decay recur. The ravages of ebola, referred to several times, serve as yet another example of the festering wounds of this world, while Rousselot’s alternative world(s) provide only a modicum of comfort.

These poems often confront the putrefaction of human existence, leading into some disturbing curses:

It is worth quoting this at some length, as an example of how the shifting words, a peculiar reductio, lead us into uncomfortable poetic spaces. ‘T-Rex’, another poem that takes us to an apocalyptic world, does something strangely similar. The boundary between us and pre-historic life is mediated through Spielberg’s Jurassic Park films, and human contact is ultimately reduced to taking place through video games, where the speaker/player can ‘fire incendiary rounds in the walking rot’, a sort of withdrawal, taking refuge in a hyperreal world where danger only exists on screen and in the imagination, in the construction of robot monsters.

There is a splintering underpinning some of these poems, which seem at times a bit ‘untidy’ in form and language, but this may well be the point.  The apocalyptic visions are obvious, but flashes of humour and absurdity are also evident. The trick behind all of this lies in the title, Dawn of the Algorithm, formulae designed to circumscribe a sci-fi world world run by spare algorithmic visions and manga-like robots. But not all is so dark. ‘The Machinist’ speaks of reaching a ‘predestined escape velocity’ where ‘we can all at long last, collapse/face first into the Divine’, whatever that ‘divine’ may be – following a trajectory in the poems to an existential world which may well lead further towards a mechanic eschatology.

Sometimes the transitions are difficult and awkward, leaving this reviewer puzzled at several points. This is an angry and at times bitter collection, raging against the machine if you like, but that does not detract from the overall experience of this bizarre and confrontational book. At their best, words and images ricochet like bullets through the collection, poems exploding onto the page like dynamos.