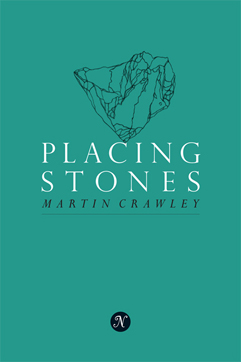 All grief is personal, all remembrance is public. At least that was part my conclusion reflecting on Placing Stones, a short memento mori by Martin Crawley. There are seven poems and a dozen or so line drawings – of different stones placed in memory – in this short elegant book from Negative Press. The previous book I looked at from this press was Still, a collection of stories inspired by photographs of an abandoned town hall. This short collection is, in some ways, a more conventional work. Elegantly designed and bound, printed on quality paper, the drawings of stones are little marvels, a few lines delineating shape and shade, giving extra dimension beyond the page. A note at the back from John Douglas Millar states that “the Jewish tradition of placing stones upon the grave represents a transfiguration.” The book is a statement of ritual, but separate, I think, from any official version: the stones are impersonal, but precise and delicately drawn. The short poems are very specific, and warm, whereas rocks are cold.

Each of the deaths is mourned and remembered; who are John, Bernard, Irene et al? We have only the faintest of sketches, perhaps little more than the rubric on a gravestone. These are, I feel, clearly an artist’s poems, rather than a poet’s artwork, though that’s not a criticism, just a note of the clean luminous, imagistic style of the poems. Like Rick Holland, who collaborated with Brian Eno, or Ian Hamilton, these seem condensations, taking a certain Poundian simplicity of image as the start and end point. For instance, “Irene” ends:

In the window box
copper leaves are opening
on the little rose bush
and in spite of your efforts
the mint is spreading.

Read it wrong and it could seem banal, but there’s a precarious balancing between prose and verse structure which gives it an air of authority, that owes something to spiritual verse, or to eastern forms. Across the seven poems, hardly a word is out of place, and though the theme is loss – and in a couple of instances, the death is a violent or an unexpected one – remembering is what is important. Yet I can see why it was necessary to pair the drawings and the poetry. These poems, which illuminate an aspect of a life remembered, give life to the departed, whilst the stones, our traditional way of memorialising, are more permanent, more ritualistic. Together they create something a little distinct from the usual poetic elegy. Here it seems the memorialising is what’s important. We know little of the relationship with the author, and the words discourage us from prying too deeply.

If there’s a failing with words, and it’s a slight one, it’s that the point of view changes across even these very short poems, so it’s sometimes hard to position oneself in relation to the poem. “Bernard” begins:

How was Dewling?
He’s Leslie now, and I’m Bernard….

What was West’s first name?
All too long ago, I can’t remember.

There’s a mention of “Firle Beacon” but the picture so captioned appears later on. This, like a couple of the other poems, seems too private a language, for which the reader has little way in.

This small press, expertly helmed by photographer/writer Roeloff Bakker, specialises in beautifully produced and conceived books that mix the visual and the literary, and this latest work, presented elegantly in a plastic wrapping, has a delightful simplicity to it. I’m no geologist, but the drawings evoke that sense of discovery you might get from finding an unusual stone on a distant beach or a mountain walk, and in tandem with the elegant verses which seem to be personal memorials, Crawley has created a highly satisfying object that though personal to the artist/poet is surely also intriguing to the accidental reader; a bit like the wanderer who comes across a dedication in an overgrown churchyard.